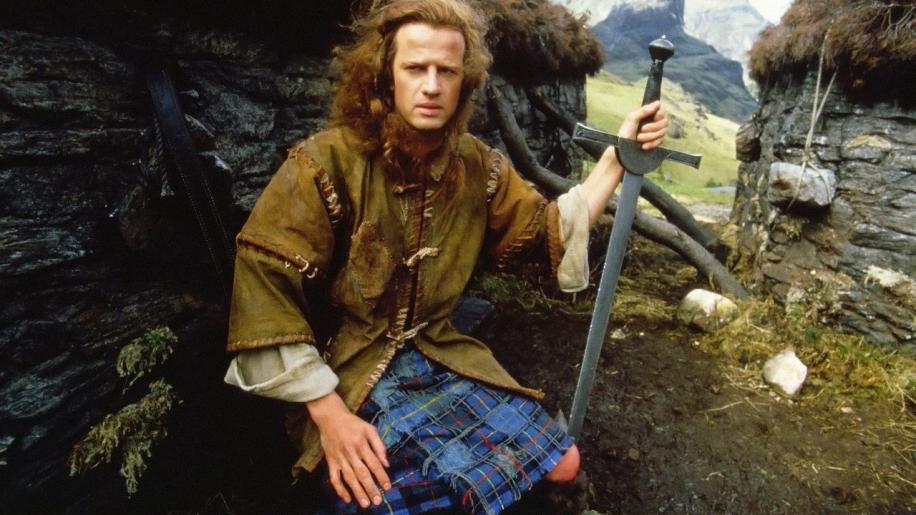 A Frenchman who speaks no English in the role of a Scottish Highlander. A Scotsman in the role of an Egyptian who has grown up in Spain. Welcome to the crazy world of the film that started a franchise which was eventually to span the cinema, television, and a world of cheap merchandise. Welcome, in short, to Highlander.

Released in 1985, the film tells the story of a rag bag group of immortals fighting through the ages. They can only be killed in one way - having their head lopped off. Otherwise they can be beaten, shot, stabbed, and generally physically abused without any consequence apart from a few days convalescing.

One such immortal is Connor Macleod. We first meet him in modern day New York, watching a wrestling match in Madison Square Garden. Interspersed with flashbacks to his life in ancient Scotland, he embarks on a sword fight with an un-named character in the underground car park. After winning said fight, he comes to the attention of the police who begin to investigate his circumstances. With an interest that is a little more personal, however, one of the female police officers gets rather too involved in the case and ends up dragged in to the world of the immortals. Against this modern day backdrop, we spend more time in the ancient Highlands learning more about the origins of Macleod. We see him training, learning what he is, and his first battles with the fearsome Kurgan (Clancy Brown). We learn that the immortals must fight with each other until only two are left. Once this is the case, the final two will battle for the prize - the chance to know everyone's thoughts and to become mortal.

The trouble with Highlander is that any attempt to summarise the plot as I have done above, makes the whole film sound totally implausible. And, of course, it is so. The film is probably one of the silliest flights of fantasy ever to hit celluloid. From start to finish it makes absolutely no sense. The movie is full of inconsistencies - and not just in the infamous casting. Even within the fantasy world that the film constructs, the film-makers are prepared to set up elaborate rules to be followed, only to renege on said rules later on in the film.

Yet I make no apology in admitting that I would place Highlander into my top ten films of all time list. I first saw it in the cinema when I was 15 years old, and have seen it numerous times on VHS, DVD, and now Blu-ray over the years. I can recognise its flaws, so just why do I love it so?

To me there are several reasons why Highlander just works as a film despite its flaws and inconsistencies. The first reason, and even when I was fifteen I recognised this, is the sheer kinetic energy that the director brings to proceedings. Russell Mulcahy was a pop video director long before that medium was recognised as an art form. However, he was always interested in pushing the boundaries of the medium, producing mini epics such as the fantastic Wild Boys video for Duran Duran. He obviously truly believes in the story he is telling, and brings some audacious tricks to the screen. Cuts between parallel strands of the story are beautifully realised. Just one example is near the beginning when we move from the underground Madison Square Garden fight. The camera pans up through the ceiling of the car park, brickwork giving way to the dry stone wall of a Scottish Highland village, before the cacophony of sound places us firmly into the location. It is a masterful moment that may have been imitated many times since, yet it works incredibly well here. There are many other examples such as this - they show a director who is not afraid to be bold, not afraid to show panache.

Yet at the same time, he is not afraid to bring something more to a story that is so silly. The consequences of being immortal are explored here extremely well - and Mulcahy is not afraid to bring pathos to the film. The scene where Macleod has to say goodbye to his wife of many years, as she dies in his arms, is fantastically realised and is likely to move the viewer. The director is not afraid to slow things down - to allow emotion to colour the palette, to contrast with the over the top fight scenes. Macleod's relationship with his loved ones are given time to breathe, never more so that the woman (Rachel) that he rescues originally in Nazi Germany. Their goodbye is another incredibly poignant scene - as you can see her gradual realisation that he is not coming back after spending a lifetime with her.

So the direction raises this film above its silly origins but there is more to the film's success than just this. The performances, considering the background of the picture, are also superb. Christoph Lambert (Macleod) was hired on the basis of his performance in Greystoke. He had no dialogue in that film, so it was only when he arrived on set to film Highlander that they realised that he actually spoke no English. Yet despite this barrier, Lambert brings a real depth to the role. In the early days he seems to be cocksure, slightly arrogant, a very earthy character. But by the time we reach modern day New York he has already reached a level of maturity that can only come with a life of centuries lived. Those expressive eyes manage to convey this superbly, and his whole bearing seems different somehow. It really is a superb performance - not OSCAR winning by any means, but it fits the role superbly.

Playing against him is the under-estimated Clancy Brown as The Kurgan. I have always enjoyed Brown's work - even though he seems to me to have been typecast according to his looks and build. At the beginning of the film he is very much Macleod's nemesis - being better than him physically and mentally. By the time we come to New York he has developed into a truly chilling character - the scar of a neck cut held together by safety pins, no respect for authority or people. His chilling performance in the church, miming an obscene sexual act to Nuns, before licking the hand of a priest is an act that still repulses me even today. It is not the kind of thing you see too often in cinema. Every film such as this needs a villain who is at the peak of his powers, who is strong enough in body and personality to stand up to the leading man - and Brown provides that here.

However, it is not just these two that impress. Sean Connery as Ramirez, of course, must get a mention here. His may be a small role (that took only ten days to film) but it is a pivotal one. He is the “Spanish Peacock” who mentors Macleod, who teaches him who he is. Connery manages to take a very minor character and truly bring him to life, making him larger than life and implanting him in the viewer's consciousness. Not many actors could display the mixture of toughness and emotion that Connery displays here.

Finally, the music is a key part of the film. You probably already know at least one song from the soundtrack, which was performed by Queen and released on the A Kind Of Magic album. The title track appears over the end credits, and the title is taken from a line spoken by Macleod. But it is the incidental use that really moves. Who Wants To Live Forever is the song that plays over the key death scene, and it adds a wonderful emotional underscore to the scene. Other key tracks making an appearance are One Year of Love, Princes of the Universe, and noticeably the Scottish tinged heavy rocker Gimme the Prize over the duel between the Kurgan and Ramirez. The music is visceral and
bombastic and there really could not be a better fit to the style of the movie. Complementing this is an excellent orchestral score by Michael Kamen which is used elsewhere to great effect.

In addition to all this, the scenery is worth a mention. The film was shot on location in New York and The Highlands, so the environments almost become a second character. The beauty of the Highlands is really brought to life here, and contrasted fantastically with the grime and neon of the American city. The film looks fantastic all the way through, and this adds a lot to the viewing experience.

Highlander, then, in my opinion is a fantastic film. It offers adventure, excitement, beauty, and violence all in one concise package. It draws the viewer in quickly, and then rewards them with a roller coaster of an experience, never letting up for a second, but always allowing time for the emotion and the scenery to breathe. I do not think Mulcahy ever lived up to the promise that was revealed here in his first feature, and that is a shame because without him I doubt this film ever would have been the success it was. Yes, the story may be silly and there may be inconsistencies - but this is one of those rare occasions where this really doesn't matter. As a viewer all you need to do is sit back, disengage brain, and enjoy the ride. And what a ride it is.