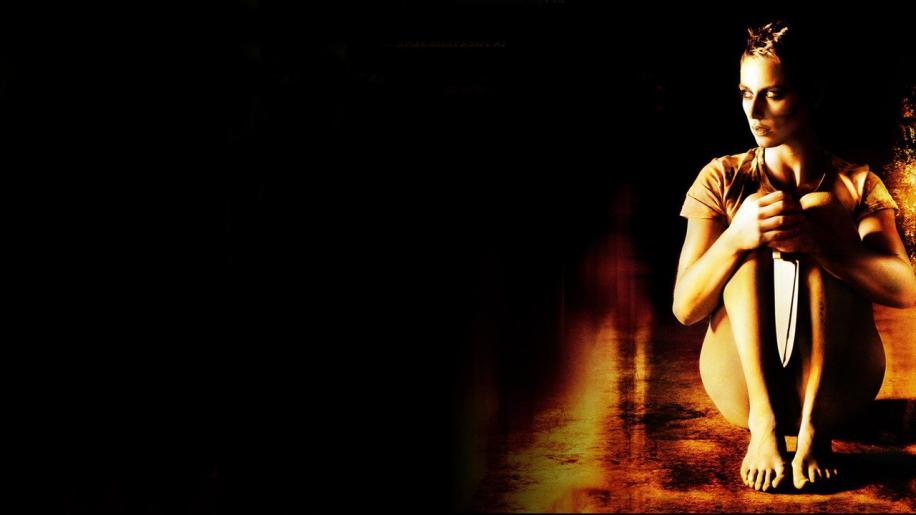 Even though the budget of this movie was less than stellar, the picture quality is certainly more than can be expected. Colours do have a contrasted look, making lighter areas stand out and creates deep shadows even in daylight scenes. This is fine as it allows those scenes shot in daylight to have an air of darkness about them, maintaining the “something bad is going to happen” atmosphere. Colour is vibrant and very fresh, when allowed. Look at the screen cap of the rusty van and the wood in the background; reds are vivid, but do not bleed (depending on your screen, of course) while the cold and greens of the corn to the right are nearly luminescent. Of course, one may argue that this is not natural, but nor is the movie. This almost surreal overly saturated palette is absolutely fine and contrasts well with the more grim interior shots. The interiors of High Tension tend to be all dark browns, olive greens and sometimes blue/whites of a bathroom. All have deep shadows, again to heighten tension, so to speak. Ultimate detail is also above average. Look to the close up of the well toned Cécile De France and you can see plenty of blemishes and makeup details. This is really just as well because, as I mentioned earlier, the art design really is top notch stuff. There is little artifacting that I could see even in deep shadows or solid blocks of colour. Edge enhancement is apparent, though. Look out for a shot towards the beginning where a large water tank rises above a corn field against an orange sky. There are clear lighter areas to either side of the water tank's silhouetted support members. Even so, the edge enhancement is not as bad as the Indiana Jones Trilogy and only surfaces during High Tension's less frequent daylight scenes.

As ever an integral part of a horror movie, sound must be done properly or the whole thing can fall apart. Luckily High Tension has some pretty good sound-scapes that add considerably to the whole experience. Dialogue is, as in most recent releases, totally intelligible but the rasping breath of the Killer is particularly well done. Wheezes and phlegmy crackles pursue his victims in time with the creaking of leather work boots. Still saws have an angry two stroke growl that presents an ear shattering treble clarity. Bass is also present, but this is to add a sense of anxiety rather than to punctuate action scenes. Rear speakers are used, but not pointedly and never seem overly obvious. There are a couple of musical interludes which are handled well, if a little bombastically. Indeed, if there is anything truly wrong, here, it is a lack of subtlety to the sound. It is all very angry and insistent which can be tiresome. This is a small nitpick, though in what is a very effective soundtrack.

Haute Horror: The Making of high Tension is a pretty good making of... docco with cast and crew adding their penny's worth. Some behind the scenes gems crop up like when poor Philippe Nahon actually got hit in the head with a prop, or that the still saw was an actual still saw, not a rubber safety alternative. Some of the script is also discussed and there are apparently some serious deviations, especially during the latter act, due to time and budgetary constraints. Personally I think things worked out for the better, but it is nice of the makers to admit the deviation. I also get the impression that these moviemakers are genuinely enthusiastic about any movie genre so that, while I didn't think much of High Tension, they at least put their heart and soul into it and tried to make something they would like.

Gianetto De Rossi: The Truth the Magic and the Madness looks at how the well deployed makeup was designed and the man behind those designs. Apparently Rossi did the makeup for the grossly underrated David Lynch version of Dune and the moviemakers wanted a Baron Harkonnen like villain. The likeness is almost uncanny, though there are no festering boils or heart plugs... A lot is made of the particularly effective cut throat effect which caused Nahon some issues. Apparently he was frightened he would actually cut the poor actress's throat!

The separate scenes commentaries are well done with creators and Cécile De France adding much background information. Otherwise the commentaries are rather unremarkable, but nevertheless worthy for fans of the movie.

A missed opportunity this may be, but as a thoughtless slasher High Tension works well enough. I just think that these movies, like Carry On... or Hammer Horror have exhausted their stay and need to move on or achieve something different in order to truly shine.