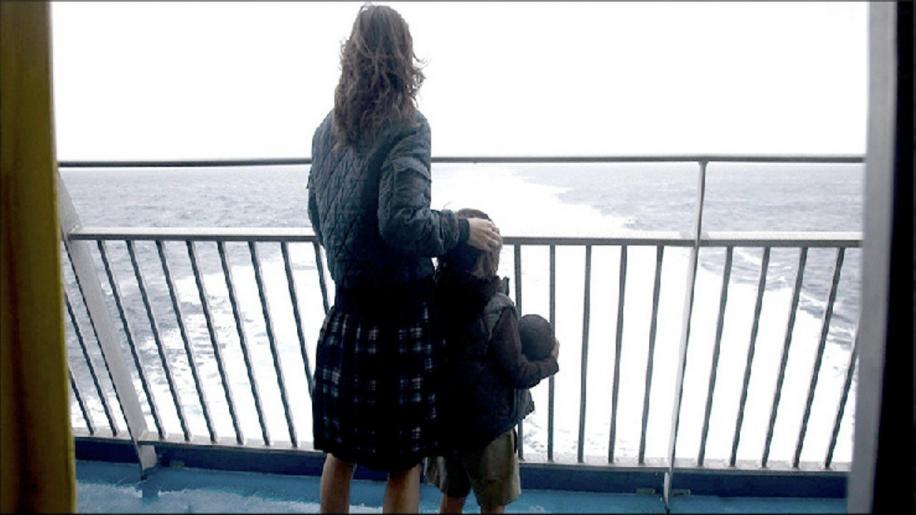 Hierro is just the kind of film many fans of low budget chillers look forward to sinking their teeth into - it has no big name stars attached, is foreign and comes with the barest hint of a formulaic track record attached to those behind its making. Personally, I love to jump into the unknown, pick up a film I've heard next to nothing about and let myself be pleasantly surprised whilst fully in the knowledge that it can hardly disappoint given the lack of heightened expectation one normally associates with a highly anticipated screening. No preconceptions usually equals a fresh and often rewarding viewing. The caveat with Hierro being that, although the director Gabe Ibanez has no blueprint which he is aimlessly following into the realms of the mystery thriller (M. Night Shyamalan take note), he also has no great pedigree to speak of in this genre, or any other for that matter, given that this is his feature debut.

Scripting duties fall to Javier Gullon, whose previous focus seems to have fallen mainly on a series of comedy shorts and only one sojourn into the thriller territory with King of the Hill (El Rey de la Montana - 2007). Therefore the sole responsibility of drumming up hype for this outing falls in a somewhat troubling direction - the producers. It is never a great sign when the reliance of poster appeal is placed upon the shoulders of those whose names have been attached to greatness via less than artistic routes. Still, with the tagline running that they have had involvement (though it doesn't name drop which of the executive producers/producers they refer to) with The Orphanage (2007) and Guillermo Del Toro's Pan's Labyrinth (2006), at least there is a pointer into which direction the audience should be setting their minds. The key question being whether that is a suitable comparison or a millstone around the neck of the feature - only a brief 89 minutes lies between the viewer and the answer.

Proceedings get under way in an inventive, if somewhat strange manner. A prologue of sorts introduces us to an unnamed mother and child driving in their car late at night along a dark and winding mountain road. There are some nice directorial touches as a toy car mimics the movement of its real world equivalent as it lurches from side to side on the bends whilst the mother struggles to get the young lad to put on his seat belt, thereby losing concentration on the road ahead. The fact that this is unlikely to be the smoothest of rides is a point quickly made and the added flourish of some nice cinematography and framing helps to make this predictable sequence feel genuinely novel. No sooner has the scene ended, then we are whisked away to meet the protagonist Maria. She works in an aquarium facility and from this introduction the themes of water and nature are quickly established as visual cues and a mirror of her psyche. She returns home with her son, Diego, to rise early the next morning so they can begin a holiday. Even at this early stage, the similarity to the initial scene of mother and child is already established. The ferry ride to the island they intend to visit is as troubled as the car ride of the woman in the prologue and soon we have a case of a missing child. This is the main catalyst for everything, maternal loss and the effects it has on the mindset of a single parent are explored as a backdrop for a thriller that increasingly falls back on the age old trick of asking viewers to decide if the story is the result of malevolent external forces or internal psychosis.

Six months after the events and her return to everyday life is disrupted when she is called back to the island of El Hierro, from which the film takes its name (it's in the Canary Islands if you really must know) and the journey proper begins. It is depicted as a typically odd small community of monosyllabic characters, all seemingly possible boundaries through which Maria must negotiate past and draw information from if she is to get to the bottom of the mystery that lies before her. The score starts to enter the film more and more by this point and bounces to-and-fro between playful and sinister, never staying long enough though to establish a concrete tone for the events. Part of this is down to the brevity of the film, as the running time of less than 90 minutes seems to dictate a certain compact nature to the plot unfolding. Were it allowed a little longer to breath, I'm sure the score would have more of a consistent thread connecting the shifts in mood, but with proceedings already falling into a formulaic pattern, the knock on effect would likely have been an experience that outstayed its welcome due to the lack of layers.

The prime problem with Hierro is laid out at the very beginning and the director unfortunately struggles to hold back, sufficiently dilute or deftly distract from the inevitability of the unfolding of the plot. There are too few red herrings or sideways atmospheric character based dalliances to make it multi stranded and too many instances of the same ground being reemphasised. The prologue highlights this flaw above all other scenes - by taking an instance that seems preordained and merely shooting it well will sow the seeds of doubt in the viewer that there is anything truly unique to the actual narrative. Quickly the worrying thought that this may be very familiar genre fare with a few tassels on becomes a very real possibility.

This nagging doubt about the ingenuity of the story is not helped by the subsequent disappearance of the mother and child from our screens without the barest explanation. The fact that the characters are discarded so quickly and given their introduction at such a key moment - that they are to be seen in the viewers eyes as the first sight of the narrative - it would hardly be a risky bet to surmise that they will feature later on and that this incident will play a major part in what is to unfold. This is a classic trick of the genre and one that so often fails to live up to its potential, partly because it has been done so many times that the instant a scene appears that has no bearing on the rest of the story, audiences start to attempt to guess its significance. This is a classic trick of bookending important facts that have a bearing on the whole but are not to be entirely revealed until the final reel - at its most effective it can be devastating, but without sufficient distraction it can override all other elements of a story and force an audience into a guessing game. It is beautifully shot and features some breathtaking vistas, but it is always troubling when the prime compliment paid to a film is the manner of the framing rather than the substance of what is actually being framed. Hierro follows the blueprint laid down by many before it, being tried and tested or clichéd depending on how brutal your assessment is to be. The sad fact is that what should be enigmatic and emotionally charged, in Hierro is just a tad too telegraphed for there to be much power left within its final punch.