This is rocket science 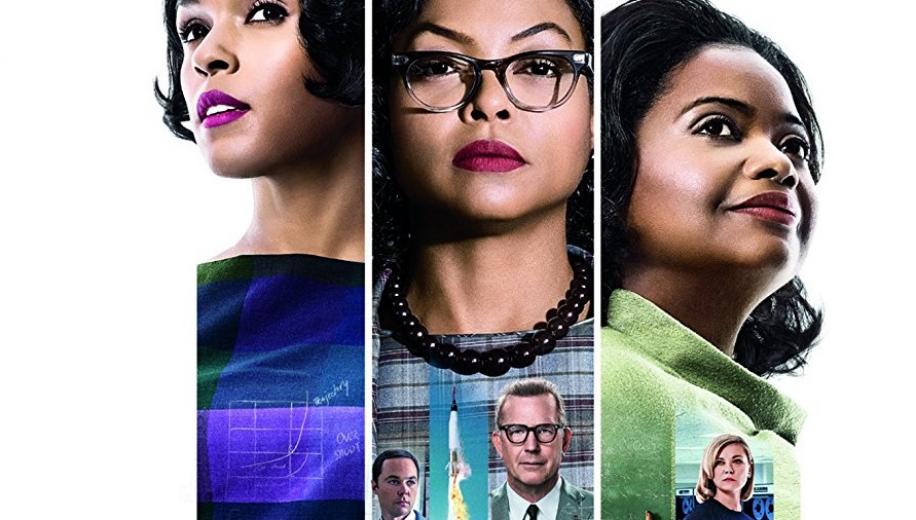 Hidden Figures tells a worthy story that many people wouldn't have even thought about - the changing sociopolitical landscape in the US during the 60s space race, which basically left anybody black hidden.

We follow three NASA geniuses who have only two things holding them back - they are black and female at a time when segregation is rife (particularly in Virginia). Forced to battle through prejudice and persecution - often in quite an insipid, passive fashion that makes their working conditions unbearable - just to do a job they are patently better at than anybody else in the room (or the damn building), it's a painful but powerful tale of the twisted past and the brave, unsung heroines who fought through for the recognition they rightly deserved at a time when many were too blind, too insecure, or too backwards to admit it.
The strong leads Taraji P. Henson (Empire), Octavia Spencer (The Help) and Janelle Monae (Moonlight), are bolstered by heavyweight support from Kevin Costner and some nice work from Jim Parsons (Big Bang Theory) and even Kirsten Dunst. It's the powerful subject-matter that shines through, with writer/director Theodore Melfi competently juggling racism, sexism, and maths, as well as comedy and drama - eventually landing in Apollo 13-lite territory, only from a different angle. Still a little light around the edges, with Pharrell's frothy songs often unnecessarily turning drama into comedy, it's heart is still in the right place.

Shot on film using 35mm, and briefly in the rather less forgiving 16mm, Hidden Figures is unfortunately inherently limited by a 2K Digital Intermediate which curtails any direct technical increase in resolution. Nevertheless, the image manages to pop with a decent amount of detail even if it doesn't make for a night-and-day UHD upgrade candidate, largely offering a more refined and polished image than the 1080p HD Blu-ray, rather than a massively superior visual showcase. It is the better of the two presentations, on the whole, but the improvement is subtle, coming with its own consequences; the expense being that it more overtly highlights the defects in both the short sequences of 16mm footage (which has rarely looked striking on a 4K screen, irrespective of source) and the CG launch and space shots, or even the red and white confetti sequence, which stand out a little more (again, UHD fans should be used to this by now).

Even the usual visual highlights, from the presentation's use of the High Dynamic Range (HDR) and Wide Colour Gamut (WCG), - which Ultra HD Blu-rays normally use to better distinguish themselves from their Blu-ray counterparts beyond more pixel resolution - are more subtle and subdued in their implementation here, shifting the hue for certain scenes a fraction (there's often a stronger red component), or subtly refining the black levels in some of the darker sequences, affording more intense and stable shadowing and commensurate shadow detail. It is a better presentation than the Blu-ray, sitting with those more classically-stylised, often period, pieces that don't stand head-and-shoulders above their counterparts (and often have an inherently softer, more diffuse look) but still make for a more refined, pleasing experience.

The accompanying DTS-HD Master Audio 7.1 track is a punchy, fun affair, engaging with plenty of great tracks from the period, which kick your surrounds into high gear right from the outset. Dialogue gets its due, with fine prioritisation across the frontal array, whilst effects are delivered with power and precision.


A strong, impressive soundtrack that delivers the goods

The atmospherics are nicely balanced, allowing for bustling streets, protest crowds, and dinner parties, as well as the energy of the NASA room itself. Each provides a warm, natural environment that puts you into the proceedings, with the score underpinning the whole affair - allowing the lighter, more comedic moments to come across as breezy and fun, whilst the more sombre touches give it weight where needed, and energy when required. Pharrell's contributions threaten to turn this into another Despicable Me chapter and don't always suit the piece, but the period songs are outright excellent. It's a strong, impressive track which delivers the goods.

As per the norm, Fox don't bother to port the majority of the Blu-ray's extra features over to the actual Ultra HD Blu-ray disc, instead making you just switch around and watch them on the accompanying Blu-ray itself. The only feature present on the actual disc is the informative, engaging director/actress Audio Commentary from Theodore Melfi and Taraji P. Henson.


A solid selection of extras

The original Blu-ray extras add further background with a substantial multi-part 41 minute Making-Of Documentary, which offers some added information into the production, with plenty of interview footage from the cast and crew, as well as b-roll footage of the film. There's also a very short accompanying look at the filming locations used. A slew of Deleted Scenes come with optional Commentary from the director, and we also get a Gallery and Trailer. It's a solid selection of extras; it's just a shame that they don't make it over to the Ultra HD Blu-ray disc itself.

Hidden Figures has it's heart in the right place

Even if it may not necessarily warrant repeat viewings, there's a great story to tell here about unsung heroines, and Hidden Figures is well worth investigating, with an impressive Ultra HD Blu-ray release that, whilst it doesn't stand head and shoulders above its Blu-ray counterpart, still makes for a decent, refined upgrade. The soundtrack is surprisingly active and there's a decent set of extras, making Hidden Figures an interesting 4K Blu-ray purchase for fans of the 1960s space race.