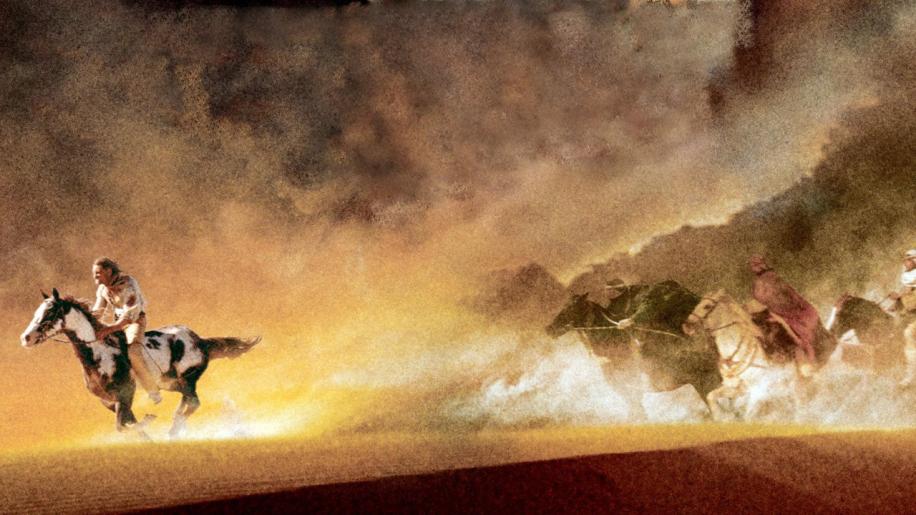 Framed at 2.35:1, anamorphically enhanced and featuring the THX badge I was expecting a quite superlative transfer, but (unlike Hidalgo himself) the picture doesn't quite make the finish line. For starters, someone has been busy with the edge enhancement machine again. Certain shots have very definite halos visible, especially when watching on a front projection system. High contrast shots, especially those set in the desert, exhibit clear ringing around the edges which can prove distracting. As you would expect from such a recent release, the source print doesn't seem to have any visible damage or dirt although there is quite a bit of grain and (possibly intentional) under and over exposure. On the whole there's nothing really bad here and it's a very watchable picture with few instances of banding or macroblocking throughout, it is however a little disappointing for a THX approved release.

With Dolby Digital 5.1, DTS 5.1 as well as French and Spanish 2.0 soundtracks, how does Hidalgo sound? Well, variable. Whilst scenes such as the start of the race, the sand storm and the locusts swarm all whip the soundstage into action, most of the movie is spent with the audio locked to the front sound stage. Disappointingly, there are not many ambient effects with little to no use being made of the split rears except during action moments. Bass fanatics will be happy to hear that, when the action does get going, the bass will suitably impress leading you to believe that the race is passing through you screening room. With Hidalgo I also had an opportunity to run the DTS track but to be honest; it's more of the same. I thought I noticed a slightly wider front soundstage and it did run slightly louder but it shared the lack of ambient effects with its Dolby Digital stable mate.

Oh boy did I have fun on this one and not in a good way. First off, what do you find if you play the disc in your trusty DVD player? Well, not a lot is the answer. ”Sand & Celluloid” (9'02) is a pretty good, if short, behind the scenes featurette. With interviews from cast and crew including Viggo Mortensen and writer John Fusco, the feature looks at the shooting of the movie including some of the unusual problems that came along with transporting hundreds of horses to Moroco, spray painting several horses to match 'TJ' (Hidalgo) and creating edible locusts for Viggo and 'TJ' to eat during the locust storm scene (hmmmm, edible locusts).

Also present, but hidden behind the Indian + sign on the bonus menu, is a short , unnamed feature. Running for just over three minutes, the “easter egg” seems to have been clipped from the longer (yet substantially more difficult to access) DVD Rom feature “Americas first horse”. Featuring a few, short, interviews with Native American Indians and Viggo Mortensen, the bonus items touches upon the legends and stories that relate to Hidalgo and his race across the desert. These two features aside, there are no other bonus options to be had here. No trailers or (sadly) commentaries are present. This is a shame since the features that are present show Viggo Mortensen to have an interest in the subject matter which could have made for a potentially interesting track.

Now, normally I would run a mile from “enhanced computer features”, not because I'm a technophobe, quite the opposite, but because I know what you have to go through to play them. Hidalgo features such an option. Highlight the Americas first horse option on the bonus menu and you get a trailer for the enhanced featurette but you can't play it unless you put the disc in a PC or MAC. Since I did want to know more about Mr Hopkins and Hidalgo I dutifully dropped the disc into my PC, fired up the disc and installed the necessary interactual player. Once installed, I ran the movie and selected the option to be informed that QuickTime was required. It isn't on the disc so I downloaded it (luckily I have high speed internet access since it's an 11MB download), installed it, rebooted and tried again (although I'm pretty sure an average viewer would have given up by now). Eventually I managed to run the extra feature. Firstly it's not very “enhanced”. The main bulk of the feature is a 22 minute QuickTime movie which follows the origins of the Spanish Mustang into America, the role they played in the development of native tribes and the part Frank T Hopkins played in their protection. It also touches upon modern conservation work taking place to save this breed and is interspersed with the writings of Mr Hopkins. All in all it's a pretty fine little feature but why it couldn't have just been put onto the disc as a normal video extra is a question I'd definitely pose to Touchstone. The rest of the “interactive” extras are the usual mix of website links that will, assuming you are connected to the web, take you to material on the Touchstone web site.

Whilst it does sag a little bit in toward the middle of the story and pushes a few too many emotional buttons, I enjoyed Hidalgo. Although it's obvious that some events and sequences will have been stretched or simply written for the movie, the story is made all the more remarkable by its basis in fact. Viggo Mortensen moves on from his “Lord of the Rings” character to take the lead role and does it with some conviction whilst Omar Sharif seems to have great fun with his role and 'TJ' steals the show as (the main) Hidalgo the spirited mustang. The lack of extras and the amount of work necessary to view the PC/MAC based content may put many off purchasing but it is definitely worth a rental, just keep the more emotional members of the audience well stocked with hankies and assure them it will all be ok in the end.