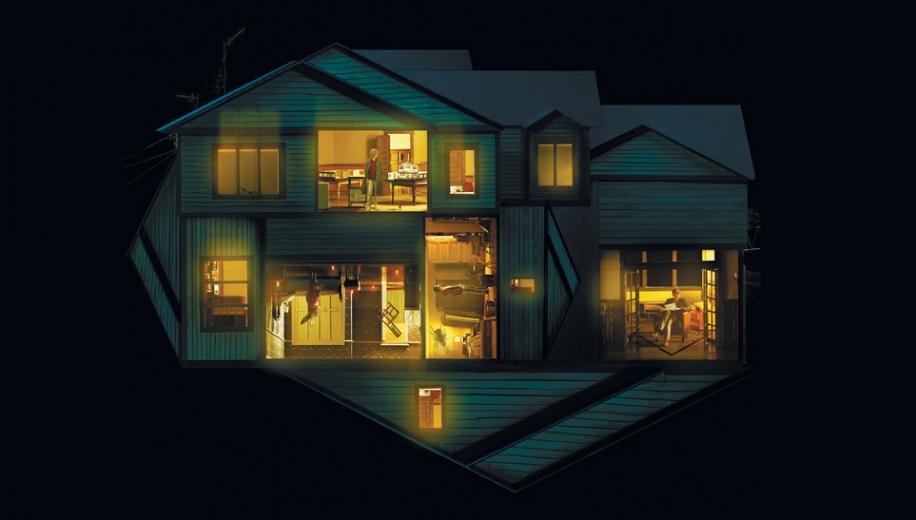 When Annie Graham loses her mother, she and her family are left with a whole lot more than just grief to deal with.

Every now and again there will be one film in particular that, as it makes its way to the big screen, will already have a lot of buzz surrounding it. Already penned as "The Exorcist for this generation", there is a lot of pressure on the shoulders of Hereditary.

The first feature film to be written and directed by Ari Aster promised audiences, based on the trailer, a creepy and unnerving experience, one that was sure to leave a lasting impression. And that's exactly what it delivers.


Terrifying nightmares, intense visions and strange occurrences coalesce into a dramatic crescendo that will leave you questioning what you’ve just witnessed.

Dealing with the recent death of her mother, Annie Graham (Toni Collette) has more than the usual feelings of grief to deal with, as she explains at a local group counselling meeting. Feelings of blame and guilt consume Annie, who finds catharsis in her work as an artist creating mini dioramas depicting scenes from her own life.

Isolating herself in her studio it becomes apparent that Annie has perhaps been neglecting the rest of her family; her husband Steve (Gabriel Byrne) who seems to do what he can to help his struggling wife but ultimately remains in the background; her teenage son Peter (Alex Wolff) who seems like a regular pot-smoking high-schooler and her younger daughter Charlie (Milly Shapiro) with deep set eyes and blank stare that provokes a strange cocktail of concern and apprehension simultaneously.

The death and funeral of Annie’s mother appear to have set into motion a series of bizarre events that begin to unfold within the Graham family, a family that are growing more and more distant from one another. Terrifying nightmares, intense visions and strange occurrences coalesce into a dramatic crescendo that will leave you questioning what you’ve just witnessed.

For those used to the more recent films of the horror genre, Hereditary might not quite tick all your boxes. Aster’s approach here is one of patience, he takes his time to set the pieces up and get them into place before they make complete sense.

The story at the heart of the film is one of the anxieties surrounding motherhood and raising children but it is neatly interwoven within the terrifying world that Aster has chiseled out so that it slips into place seamlessly.

Influences from horror classics can be detected, but they have been used as inspiration and never feel derivative or just re-hashing old ground. There are no predictable canned jump scares that rely on the music to cue the audience. No, the music here, supervised by Joe Rudge, is used in an extremely unnerving and uncomfortable way. The sharp string instruments are akin to fingernails on a chalk board, elevating the strange unfolding of events to a higher level of creepy, while the low bass hum that is relentlessly used throughout is a stroke of genius that succeeds in creating a sense of foreboding threat that never offers relief.


It doesn’t try to offer up everything to the audience on a silver platter and is quite happy to make you wait for the pay off.

As a whole, the film is paced with such precision that for the first half it is never fully clear what direction the remainder will go in, which is testament to Aster in today’s age of predictability. Certain events happen and small clues are uncovered that contribute to a sense of dread that is always running just below the surface, a dread that bubbles up intermittently at the precise time for full impact.

Cinematographer Pawel Pogorzelski has masterfully shot the film allowing the camera to take its time lingering on faces or steadily meandering through the dimly lit home of the Graham family. There is one sequence in particular that is brilliantly hair raising that proves that subtlety can and does work - and not everything has to be announced by shrill, loud music.

Toni Collette is superb as Annie, her enormous eyes doing much of the talking in moments of silence and her face baring the brunt of the extremities her character has been through. There are a couple of scenes in which Collette’s Annie delivers an emotionally fuelled monologue that is done with such intensity almost as if she actually lived the life of her character.

Alex Wolf gives a strong performance as Peter despite actually having few lines and, similarly to Collette, allows his face to do a lot of the talking. Newcomer Milly Shapiro does creepy to a tee as Charlie who also speaks very little but makes a certain noise with her mouth that is enough to make the little hairs on the back of your neck stand up. Gabriel Byrne’s Steve doesn’t really have much to play with as the worn out and exhausted husband to an emotionally suffering wife. Sticking mostly to the background, Byrne provides support for the rest of the cast which in turn amplifies each of their performances.


A film that will have you thinking about it after leaving the cinema.

Hereditaryis not your average horror flick. It doesn’t try to offer up everything to the audience on a silver platter and it is quite happy to make you wait for the pay off. With a running time of just over two hours all the elements are positioned so as to draw you into the weird world on the screen. And this is a film that has all the elements of a masterpiece but something, somewhere did feel slightly out of place.

Taken on their own, each building block of this film is perfect: the cast, the music, the story, the music, but put together there’s something I cannot quite put my finger on. In spite of this though, it is still a great film that will have you thinking about it after leaving the cinema.