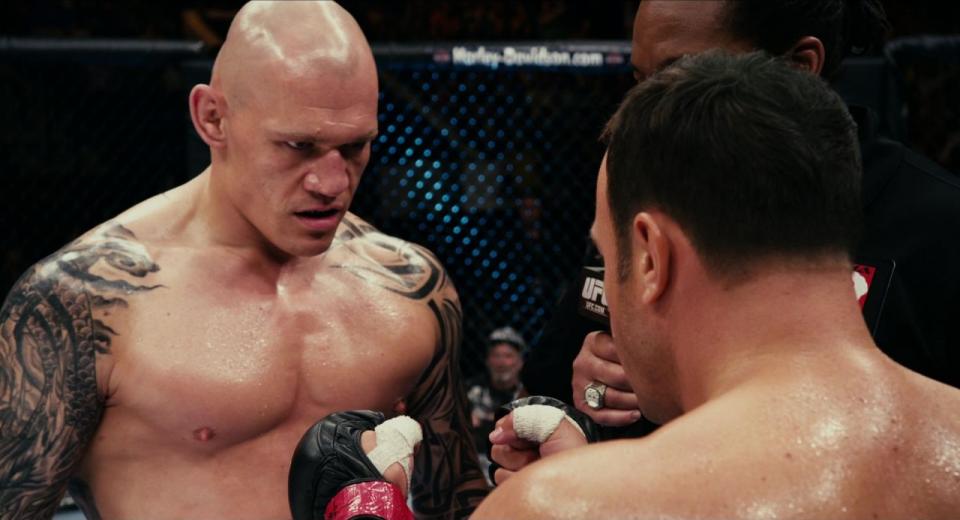 Why is it the Americans have to do everything to excess? In the UK we had Saturday afternoon wrestling, with Giant Haystacks and Big Daddy throwing each other around the ring. In the ‘States, they made this WWE and then eventually combined this with kick boxing and call it Mixed Martial Arts, or cage fighting to the rest of us. While wrestling is something you can take your granny to, MMA is considerably harder, with much more contact, blood and danger of real injury. There must be a few issues with their image just now, as this film does feel a little bit like a publicity movie for the sport at times.

Kevin James – of The King of Queens fame, plays Scott Voss, an unmotivated biology teacher in a Boston high school. Habitually late, he has no interest in his students whatsoever, saving his energy for chasing school nurse Bella Flores (Salma Hayek) and avoiding anything even closely resembling work. Amazingly enough, this does not make him unpopular with the other teachers, and he has a particular friendship with aging music teacher Marty Streb (Henry Winkler), who confides he and his partner are expecting a baby late in their lives. When the music programme is threatened by budget cuts, Voss finds himself agreeing to lead fundraising to save the department and also Streb’s job.

The opportunities for a teacher to earn extra money are a little limited. Yes, you can do a few private classes, but they need tens of thousands of dollars. Voss takes on an after school role leading a US Citizenship class and this introduces him to ex-cage fighter Niko (Bas Rutten). Voss realizes that his college wrestling skills might get him into the ring and even if he loses, the money will still be good.

To a certain extent, this is art imitating life. James was a college sports major, playing American football while studying Sports Management. He then packed it all in for a life on the boards, living with his brother comedian Gary Valentine – who also plays his brother in the film, and they have both made a successful career as stand-up comedians and comedy actors. Compared to the real life MMA stars, he looks podgy and unfit, but like a powerful sportsman gone slightly to seed.

The school Voss teaches in looks wonderfully dilapidated, the teaching staff all equally ill motivated and the kids all just there because they have nowhere else to be. His life is just bumping comfortably along the bottom, and if he could just attract Miss Flores, he would be totally happy with his lot.

Voss’s first fight and indeed, the build-up does not go well. Marty Streb dresses him as some sort of Nordic invader – which would be fine if he did not then get knocked out with the very first punch! However, his potential is spotted and his training starts in earnest. The few hundred bucks he gets from losing the minor fights is never going to be enough to pay for the music program, so he needs some specialist training to turn him if not into a winner, then at least an entertaining loser.

We get quite a few cameos from MMA fighters, both current and now retired. Some can act and some frankly, have already found their niche in life! The sweat and blood flies a little, but this is a 12 certificate after all, so don’t expect it to be splattered across the ring. The action all feels quite real, with plenty of ermm.. body slams, grounding & pounding and submission grappling, not to mention punching, gouging and a bit of girly pushing.

The school, and in particular the Principle, are not happy with the fame Voss is attracting, especially after he pukes on another fighter and the resulting video goes viral. At least he is inspiring his students and this is having a positive effect around the campus.

Eventually Voss gets his dream gig, a fight that will top out the pot and safeguard Streb’s job, even if he loses. His opponent is almost unbeatable – at least for Voss, so when he discovers that the school treasurer has legged it with all his winnings to date and only by winning this fight can the music program now seemingly be saved, he knows he must fight to win…

I am not convinced this is family entertainment. If you have a couple of lads (Or laddettes) who enjoy the full on contact of MMA and a bit of heavy metal, they will probably be in to this film, but for most of us it feels just too American and without any relevance this side of the pond. It was not to my taste and I struggled to find anything that funny or engrossing about the movie. It is hardly the zenith of moviemaking and is far too predictable. It is inoffensive and well-paced, but has very little else going for it. Henry Winkler bumbles around and provides the only real comedy within the movie, but he cannot really lift it much. There really is very little for the British audience here.