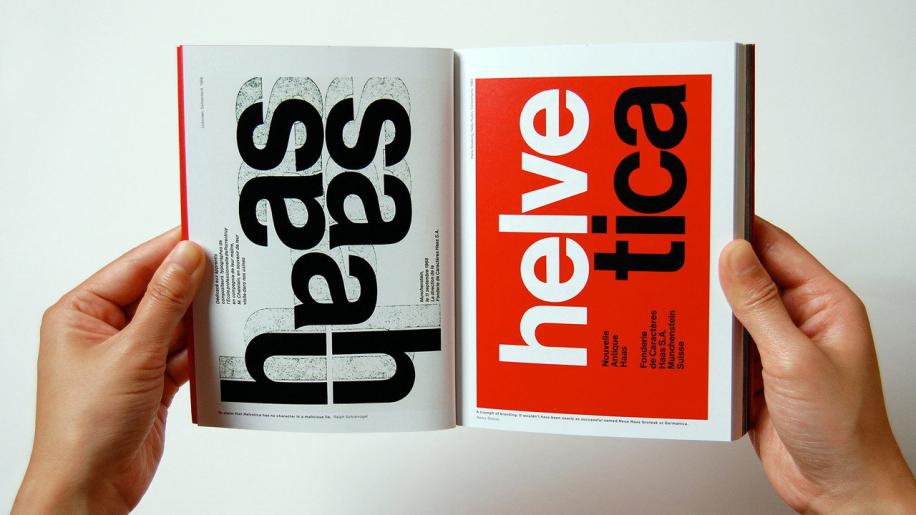 Whilst this documentary from Gary Hustwit is apt to cause much scratching of heads as to why it warrants a Blu-ray release at all - the point is ... why shouldn't it? One day, all that we see on our screens will be in high definition, thus this award-winning examination of the cultural impact of graphic design and the apparent perfection of the Swiss-born Helvetica font may just be the tip of a very large iceberg. Indeed, the more you think about it, the more appropriate it is that a feature-length study of graphic design should be presented in full 1080p glory.

“Graphic design is the communication framework through which messages - about what the world is now and what we should aspire to - reach us.”

Hustwig became fascinated by what he considered a “hidden language” existing between the depiction of signs and everyday script and slogan that appear literally everywhere and within virtually everything around us in the modern world. He felt that there was something unique and almost magical about the relationship that these messages - directions, logos, menus, titles, advertisments, flyers, magazines, printed names etc - had with the people who saw and used them - a kind of unspoken symbiosis linking ideology with information. Already a graphic designer with plenty of experience of the cultural and business medium - he had previously promoted rock bands, helped produce music documentaries and had numerous publications - Hustwig, ever creative, decided that it was time to direct a film. Thus, this strange passion for typeface and its power to influence the world became his driving focus for a documentary. Somehow or other he wanted to bring this overlooked and taken-for-granted form of language and societal direction to a broader audience, establishing the connection it has with our own multi-media evolution and bringing into the limelight many of the people who are actually involved in the practice of its formation and their practically subliminal power over us via the seemingly mundane application and arrangement of words for mass public consumption. So his documentary becomes a sort of quest to find the essence of why and how such non-pictorial imagery dominates and instructs our world.

And, yes, you're dead right when you think of his end product as having extremely limited appeal. But Hustwig, who we never actually see, acknowledges this and is able to inject a wry sense of humour into things by virtue of allowing his many interviewees free-reign to wax lyrical, pontificate and uniformly subvert, crystallise and promote their art and long-held beliefs about the power of the printed word and its associated image, instruction or command.

Taking in 75 cities (apparently), though mainly New York, Amsterdam, Berlin and London, we meet a host of disparate design personalities and hear about how they got into the game, their ideas and notions about Helvetica and how they view the evolution that this seemingly innocuous typeface has undergone over the last few decades. In their eyes, the style and influence of this font is incredibly far-reaching and profound. Certain individuals can be hugely intellectual, philosophical, artistically high-brow or surprisingly political. It isn't just the space between the letters, it seems, the powers stems from the space within the actual letters. Talk about reading between the lines! One graphics personality even likens the typeface's corporate image and all-encompassing status as ultra-right-wing interventionism gone mad with the statement “if you like Helvetica, then you agree with the Vietnam War” - even going as far as to declare the current involvement in Iraq and Afghanistan as the same sort of thing. Wow ... and you just thought it was a font, didn't you?

There is a great deal of curio-value to this treatment and the feature is actually anything but dry and tedious. When the nature of the beast rises above simple aesthetics and legibility, the discussion becomes both highly speculative and acutely weaponised, the power of influence never far from the motivations of the designers. We hear about the birth of Helvetica in 1957, raised during the Italian-inspired Style Movement, which brought 19th Century typeface screaming into the modern age with a neutralism that made it both amenable, readable at a glance and flattered with un-blatant mass appeal. Seemingly overnight, all those hundreds of differing fonts were rendered superfluous by the implacable swathe of Helvetica's raw simplicity and plain credibility - its world takeover irresistible and unstoppable. Inevitably there was to be a rebellion during the nineties, when this “perfume of the city” fundamentalism was turned upon by the new trend for “grunge typography” - literally a war of words, you could say - and suddenly all manner of variety in image creation roared back into vogue again. Helvetica's rigid, but bland conformity came under attack from a new brood of stylists, who sought to return printing to its original idealism. This was an underground movement, primarily, that became a melee of media expressionism versus dyed-in-the-wool corporate culture. Ultimately, Helvetica was destined to win again, simply because of its ease and perfection - sorry if that's a spoiler, folks (!) - and the fact that, in many opinions, it is a completed program, ready to use, universally approved and ever-lasting.

I find it quite amusing that Hustwit's DOP, Luke Geissbuhler was actually the person behind the on-the-hoof filming of Borat, although it is hard to imagine that this assignment had much use of such “skit-and-run” tactics as Sacha Baron Cohen's bogus American odyssey. The director's style is easygoing and thoroughly unobtrusive, his friend and editor, Shelby Siegel, employing an unflashy yet engaging narrative. The combined approach of all this is simple yet lyrical, wide-ranging interviews are intercut with delightful montages of such imagery as can be found on the streets, magazine covers and other avenues of printed artistry, and we seem to travel the world without any haste, any preaching or in-your-face proclaiming - which is quite refreshing for a documentary, these days. Some of the practitioners border on the quirky and eccentric, others have literally found their God, as it were, in the alchemy of mass communication, so their almost metaphysical and spiritual allegiance to the typeface actually seems quite understandable in view of the careers and notoriety that it has bestowed them. Thankfully, though, some of the participants - such as the affable David Carson - manage to turn the tables and take us on slight tangents. Carson simply enjoys communicating with the world and admits that he is largely self-taught and does things intuitively. What many consider grand graphic artistry from him are often mistakes that he made without having had the benefit of a proof-copy to look at before the final print. Thus, many of the cool ideas and novel originality he presented and made his name in the field are actually just big errors that went out unchecked. This power of communication and the desire to find the right manner in which to convey these messages to the world are the binding factors in Hustwit's exploration of the most mundane and virtually unnoticed things that comprise our everyday existence. His documentary makes a compelling case for our appreciation of unsung endeavours and it is a minor miracle that so many people could devote so much of their time to not only producing this stuff as part of their day job, but to also be able to talk passionately and at length about it without once becoming boring or repetitive.

So, there you have it. Helvetica is something that I could have just panned altogether - the subject and the delivery are not things that immediately scream home entertainment, are they - but, credit where it is due, Hustwit has achieved something here that few others would have even contemplated doing, let alone dared to undertake. The realm of modern creativity and innovation has plenty of room for such diverse fields of dissection and analysis, and, even if Hustwit's central conceit that, after watching this, we will never look at words in quite the same way again, is hardly groundbreaking or revelatory, there will be fleeting moments when curious fonts will catch your eye and make you think of just who and what lay behind their inspiration and creation. Inevitably, the point seems to be that “the more things change, the more they stay the same”, as evidenced by the slight rebellion to Helvetica's imperial might petering-out in the last few years and the simple, direct stance of the long-accepted norm winning the day.

I would hardly rush back to this documentary, but I have to say that it surprised me with its warmth, energy and genuine entertainment value. With nothing else to compare it to, and the fact that it appears to do its intended job very well, Helvetica gets itself a well-deserved 8 out of 10.