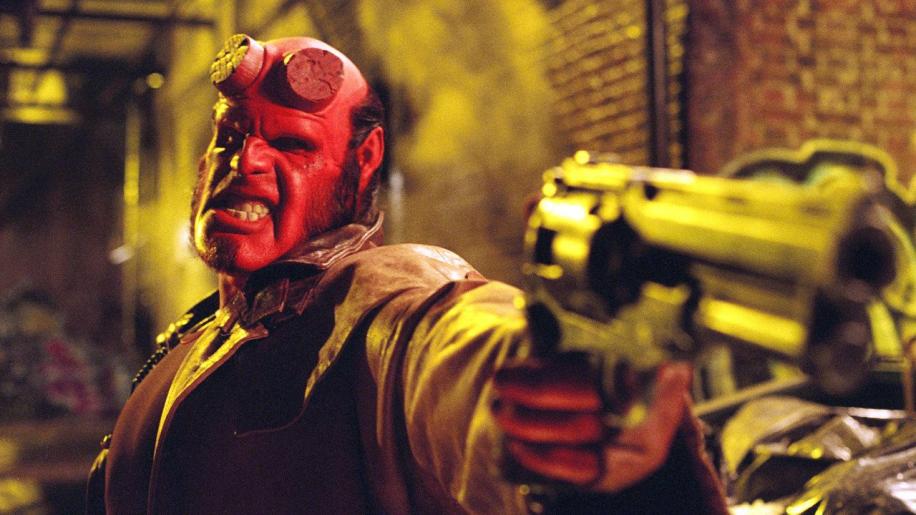 During the second World War, the Nazi's, desperate for an edge in the second World War, turn to the occult for inspiration. A group of Nazi's, aided by oddball monk Rasputin (Karel Roden), try to open a rift into a black cosmic realm where ancient Gods await to reclaim the Earth. Rasputin successfully opens a portal, but is foiled at the last moment by American forces, led by British parapsychologist Trevor 'Broom' Bruttenholm (Kevin Trainor later John Hurt). A handy grenade is thrown into the portal's mechanism, destroying it and in the process sucking Rasputin into the portal. A good job, well done. Except the portal had been open for too long, allowing a small red daemon into our world. This creature seems benign, frightened, almost like a boy - a baby boy. Concerned for this small frail creature, Broom takes in the creature as his own son. His name? Hellboy.

Fast forward to present day and we see Broom preparing his replacement, John Myers (Rupert Evans) for the task of looking after Hellboy. Hellboy himself is a fully grown analogue of an early twenties man who doesn't want looking after - what he wants is his girlfriend. With this we see him lusting after Liz Sherman (Selma Blair) from afar, an unattainable goal. But as everyone else has changed in the intervening years, what of Rasputin, how has he changed in the depths of otherworldly space?

Hellboy is an adaptation of a series of comics by Mike Mignola. Unfortunately, I am not familiar with these comics, so comparisons cannot be drawn. What is clear is a deep fascination, or adoration, of the comics by director Guillermo del Toro. It is quite obvious that each frame you see in the movie is almost like a comic still. The first time we are introduced to Hellboy (superbly acted by Ron Pearlman), lighting his cigar, you can't help but notice the lighting is like the original comics. Actually, direction is superb throughout; a very effective scene in the centre of the movie of Hellboy watching proceedings in the rain is one of the most potent in comic adaptations.
Being faithful to the comics isn't necessarily a recipe for success, though. The first cut of Hellboy I found to be a wandering movie in search of a narrative. It was neither comedy, romance, horror or action, but a barely controlled mix of all. This left me wanting more depth, more meat to the story rather than brief flashes of each story aspect. This director's cut addresses some of these issues and is a better movie as a result, with the addition of some 15 minutes or so of footage. Selma Blair's character seems to gain most from these restored scenes. This is fine as she is a fulcrum about which Hellboy and John Myers' characters revolve. As her character is fleshed out, then so are the other principle characters.

There are still drawbacks, though. The movie is now quite long at 2 hours 12 minutes. I am not spoiling anything, here, but there is one too many endings for starters - a bit like Daredevil, in that the movie should have ended at this point rather than draw it all out. The Sammael creatures aren't particularly effective as on screen characters (even though the effects and animatronics are top class) either. These creatures are just onscreen things that don't show much of anything, really. Rather they mindlessly run about the place as a mechanism to allow Hellboy to fight once in a while. Much more effective is Kroenen (Ladislav Beran). This is a proper villain with a potent aura of death and sadism about him. We never feel comfortable with this character, never understand what makes him tick - literally. With his intensions hidden, his movements are unpredictable and unfathomable which is more in keeping with the somewhat Lovecraftian feel of Hellboy. If Kroenen had been used more, instead of the Sammael things then perhaps this would have been a more intense movie.