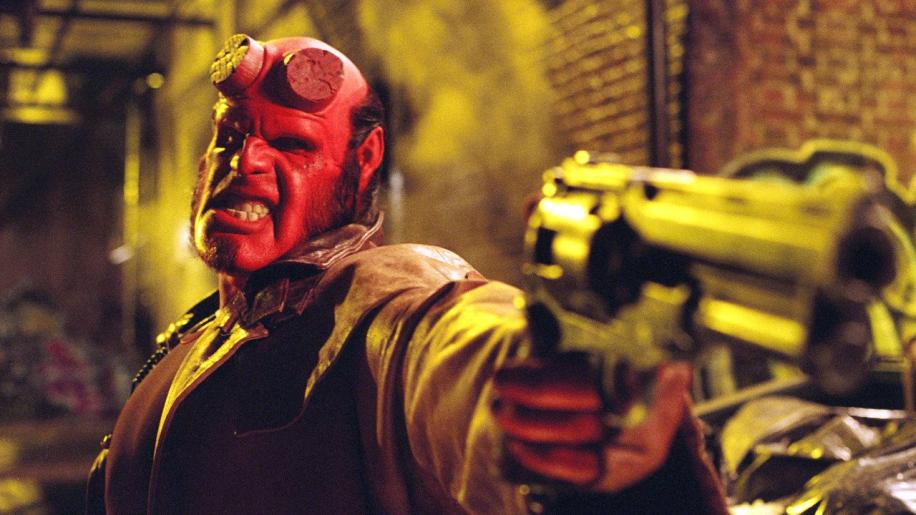 Following the worldwide success of X-men and Spiderman the scramble for ever more obscure comic book characters continues. The problem is for every Blade there are a dozen Tank Girls. So how do you ensure that you get a hit and not a miss? Well one way is to get a director like Guillermo Del Toro, renowned director of “The Devil's Backbone” and the excellent “Blade II”. You do this for two reasons, the first is his proven talent at directing movies concerning the darker side of human mythology, and the second is his obvious affection and affinity for the material. Indeed so keen was he to produce a story that was true to the Hellboy character that he brought Hellboy's creator, Mike Mignola, onboard as an Executive Producer and Creative Consultant. It comes as no surprise therefore that Hellboy, although flawed, can comfortably be ranked with the best comic book to film creations, and not the festering “Daredevil's” of this world.

For those of you not familiar with the mythology, Hellboy is the spawn of the devil, summoned forth by the Nazis and a re-incarnated Rasputin during WWII in order to open the doors for the apocalypse to rain down on Earth. Fortunately for mankind the process is interrupted by an Allied force led by Professor Broom (John Hurt) but not before a baby Hellboy comes through the portal. Hellboy is adopted by the Prof. and sixty years later baby Hellboy is all grown up and working for the BPRD (Bureau for Paranormal Research and Defence). In the words of Prof. Broom “There are things that go bump in the night, and the BPRD is what bumps back.” With the help of Abe Sapien, an underwater breathing, bad egg eating, psychic genius who sounds like the neurotic Dr. Niles Crane from the T.V show “Frasier”, and Liz Sherman (Selma Blair) a troubled, tortured woman who has the ability to generate fire when her emotions are stoked, they set out to investigate monster activity at the local museum. It is not long before they are battling against Rasputin once again, and Hellboy has to face his true destiny on Earth.

Del Toro has produced a stunning visualization of the Hellboy world. From moody gothic crypts to derelict city streets, from desolate Scottish Isles to a warren of underground railway tunnels. The art direction an atmospheric lighting produces images that would sit comfortably alongside those of the comic book world from where it takes its roots. Del Toro has specified particular lighting tones and hues for each of the main characters. Hellboy, naturally gets orangey reds, while the watery Abe Sapiens gets greeny blues, and the agents of the BPRD get black and steel greys. It is very effective and provides a wonderful colour palate for those of you fortunate to have an accurate source and viewing setup. Del Toro and Mignola have also managed that most difficult of franchise tasks, and managed the introduction of the elaborate world and back-story while providing a worthwhile reason to watch the rest of the movie. Admittedly by the end the sight of the ultimate bad ass coming through the open space portal is feeble and a little laughable (it looks like something the French might eat), but by then you won't really care because the characters are enjoyable to spend time with and the journey is worthwhile. Ron Pearlman has rightly received fulsome praise for his role as Hellboy, and I am here to add my two pence worth. He plays the character with a delightful warmth and pathos, he has a disarming wit and deadpan humour, and his faltering romance with Liz is heartbreaking. Hellboy is an honest working Joe who you would happily sit at the bar and blow the froth off a couple of beers with at the end of a working week. The only difference is your working week has been spent pushing paper and his has been spent pushing his fist into the face of some unspeakable demon.