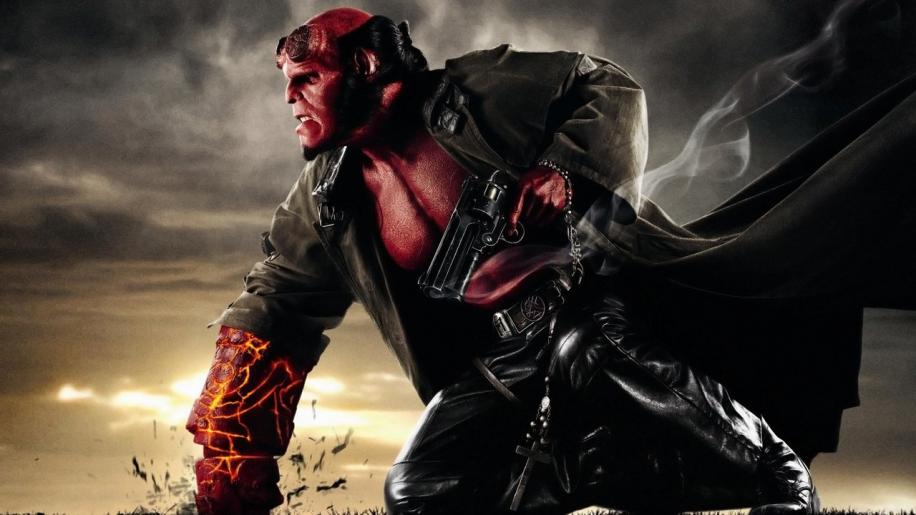 I can still remember reading my first H. P. Lovecraft story. The sheer brilliance of otherworldly places existing in another plane that invite madness from any that come into contact with them, but more then that, the intricate nature with which he delves into the story, extracting the minutest detail of these worlds. It is just so ...... believable. Other writers since his death have taken up the mantle, some expanding on the original ideas others taking the reigns and creating their own unique existences. Clive Barker is another writer whose other worlds, other dimensions, have leaked into our, human, world bringing with them wondrous sights and immense evil. In fact The Great and Secret Show is still my favourite book. However no one had really demonstrated bringing these worlds with any semblance of being to the big screen. Barker himself only dabbled with little conviction and with Waters' Spiderwick showing good ideas but kept it all fairy like. That is until Guillermo del Toro. A visionary director, a visual poet, if you will. Whose Hellboy film brought a little know comic book character to full on life opening dimensions and the madness that lies beyond. But it is perhaps Pan's Labyrinth where his talent really shines. Here for the first time do we glimpse into the 'other' world. A dark and sinister place populated by strange and wild creatures, each with their own civilisation and story to tell, worlds within worlds, within worlds, within worlds. It was a masterpiece of story telling and catapulted Toro into the spotlight in a way his earlier films had failed to do. On the back of this Toro could pretty much write his own ticket and make which ever film he wanted. After passing on some very notable scripts he decided to revisit Hellboy and give him a worthy sequel. Jettisoning any close ties with the comic book incarnation he and fellow writer/creator Mike Mignola crafted one of those rare films in which its sequel matches and in some cases betters the original. Tonight's feature, then, is Hellboy II: The Golden Army.

After a quick title card reprise into who and how Hellboy came to us the film opens up on Christmas eve and to an eleven year old Hellboy watching TV, over excited and demanding a story of his father Prof 'Broom' (John Hurt) before bedtime. Reluctantly agreeing Broom regales the story from an ancient tomb of war between the Elven people and the Human world; it is long and bloody and on the verge of defeat a goblin blacksmith persuades the Elven king to build an unstoppable army - the Golden Army of the title - but after unleashing them and seeing the devastation they cause the King immediately repents. A truce is called, the controlling Crown is spilt into three and given between the Elves and the Humans so that never again could the army be used. Hellboy drifts off to sleep dreaming of ancient wars and unstoppable foes. Toro opens his movie in a spectacular, yet so simply way. The use of puppets to tell the story inspired by Hellboy's watching of the Howdy Doody puppet show was inspired (and actually forced due to budget) as it not only plays to the young mind of Hellboy but neatly tells the back story of the film, who the main characters are and explains what the 'Golden Army' is. At once the audience is at ease with the story and there is no question. But more than that Toro has also opened the Human world to include the fantastic; a separate 'underworld' populated by its own creatures with their own civilisation and values.
This world does not need supernatural portents to open up a gate allowing evils to spill through; this world is already part of our own Human world and has existed side by side since the dawn of time only to be pushed aside, forgotten and unseen as the human traits to fill his ever needing 'hole' expand and over run the fantastic. However, it seems that greed and lust for power are not unique to the Human world.

As for Hellboy (Ron Perlman) himself, he still works for the Bureau of Paranormal Research and Defence and his blossoming romance with Liz Sherman (Selma Blair) is now an all out romance; though their relationship is a tempestuous one. One of their heated arguments is interrupted when Prince Nuada (Luke Goss), son of the Elven King in the prologue, invades the Human world to retrieve the missing part of the Crown needed to control the Golden Army. When the team arrives and sees the devastation wrought Abe (Doug Jones - now including voice!) makes a startling discovery about Liz before Red uses the resulting explosion to reveal himself to the world. This stunt proves too much for Bureau director Tom Manning (Jeffrey Tambor) and calls in Johann Krauss (James Dodd, John Alexander and voiced by Seth MacFarlane) a ethereal entity encased in a kind of deep sea divers suit to take overall control and try to reign in an increasingly disgruntled Red. The story is then set for the team to come to terms with a new leader and battle against Nuada preventing him from annihilating the human race by controlling the fabled Golden Army.

In his introduction Guillermo del Toro tells us that this is his most personal picture to date and it is easy to see why; each scene is filled with an almost Giger-esk attention to detail, the idea of an 'underworld' populated by intricate creatures, moreover he imbues his characters with intertwining ideals blurring right and wrong, belonging and love. Perhaps illustrated best with the Elemental attack; Red sits atop a collapsing sign (suitably an H) being taunted by Nuada that killing it will rob the world of something unique and that he is closer to them (the underworld creatures) than to the humans, yet he strives to protect them even though they will ultimately hate him (as they came to hate and destroy Nuada's world before the Golden Army was unleashed). This is hammered home when after taking the shot, Red is immediately set upon by the mob and he realises that he will never be accepted, but feared. This is a double whammy for Red as not only is he an outcast from the human world, but he is not a part for the underworld either, he walks a kind of limbo, literally between a rock and a hard place. Toro excels in this dynamic and gets the best performance from Perlman underplaying the hurt and the anger in a character so obviously wanting to fit in but never being able to. Perlman is, of course, perfect casting for Red and here in this sequel he is given even more rope tie our heart in knots. Even though he is an other dimensional creature his heart is so genuinely human we do not question his relationship with Liz; in fact we applaud it.

The other Bureau members have plenty to do too, Liz herself with her revelation is taken in a different direction but most notably Abe gets a far greater part. No longer an empathic swimmer he gets to show how nimble a fighter he is and gains the insight to genuine emotions. His love torn duet with Red during a drinking binge to Barry Manilow being the stuff of tears, both of joy and of heartache for the suffering love can bring. The effortless integration of Krauss as the new team leader is again given a believable back story that fits in with the love and loss that prevails for most of the run time. Luke Goss as Nuada was a revelation for me, honed and decidedly evil his own views are not ostensively wicked just a misguided sense of righteousness for his own ends; perhaps not the all encompassing bad guy of the first film but these shades of grey are what make this second film so enjoyable. Anna Walton as Princess Nuala is sweetly pretty and plays with such an awe of innocence that the pairing of her and Abe is perfectly natural, would turn me on to Barry Manilow too!

Toro and Mignola spin an intertwining story that works on many levels, the co-existing worlds, love, loss, belonging, separation, right, wrong, jealousy, greed and above all acceptance are explored. It is only a short film but there is plenty packed into the two hours, but it never feels stuffy or overblown. A lot of this is because of the amount of humour injected by the characters. It is a genuinely funny film, from quips and one liners that we associate with Red to some downright slapstick moments such as Krauss taking Red down a peg that serve as light relief but also make a point. Such skilful writing strikes a delicate balance and The Golden Army hits it every time.

As a sequel the story is grander than its forbearer, but due to a studio change and a budget cut it does have a rather studio bound look, even if the sets are mammoth. There is an almost set piece to set piece motif running through and whilst in most films that might considered be a drawback here it emphasises the comic book nature, page turning if you will, and is a positive boon. The sets themselves are exquisite in their design with an attention to detail so rarely seen in what has now become a predominantly CGI infested green screen domain. And so bucking this trend Toro has many of the sets and characters practically built, and you know what, it shows. Oh there is CGI but for the most part it is consigned to the back ground and you really have difficulty is telling real from virtual, with the possible exception of the Elemental. Toro employs him name sake Guillermo Navarro, once again, as his cinematographer and together they create another distinctive look. Bathing the 'worlds' in their own colours and shooting in an almost ethereal way this is an incredible looking film. I said in the first paragraph Toro has been called a visual poet, well never has that term been so well applied as to Hellboy 2, every scene is a story, every frame a picture, every character a portrait.

Toro has excelled himself with this sequel crafting a film as uniquely enjoyable as the first but being at the same time more accessible and in doing so surpasses itself into true greatness. A terrific story, exceptionally told and looking every bit as spectacular as ones own imagination. An unreserved success.