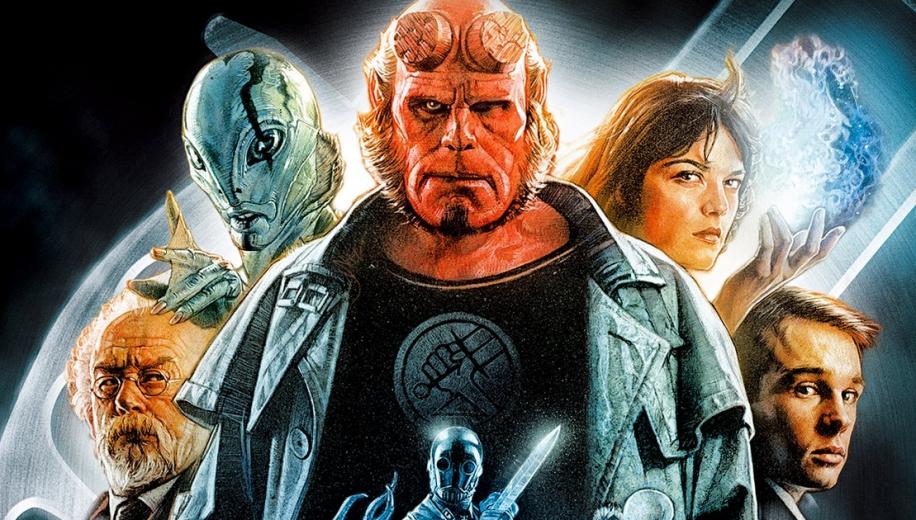 Look at the size of that whammer!

Well before the MCU and the proliferation of superhero movies, comic book adaptations were few and far between, and even rarer was a successful one. Fresh from the success of Blade II, director Guillermo del Toro was ripe for the adaptation of Mike Mignola’s dark comic creation Hellboy; bringing with it a style, verve and epic quality, meaning there were rich rewards afoot.

Telling the story of a creature from another dimension brought forth by a Nazi plot to open a portal to release demon Gods, the titular character is brought up by a human ‘father’ and serves as a protector against the ‘things that go bump in the night’. A suitably high budget, coupled with a suitably epic story, meant that the whole film has a grandiose quality; however, boiled down it is a fairly simple premise with ostensibly, and ironically, one dimensional villains, but held together by a director who knows Hellboy’s motivations and psyche. Del Toro would explore the nature of being accepted much further in the sequel, but the groundwork is laid down here, with the depth of character that moves the film along.

I very much like Hellboy II, especially the shades of grey in the characters, there is much more to them than here in the original, which could almost be pantomime villainy; where it not for Ron Perlman’s masterful characterisation and del Toro’s expert direction, Hellboy, could easily be overlooked. As it is, it remains eminently watchable and thoroughly enjoyable.


Hellboy was shot using Arriflex 435 ES cameras on 35mm film. The source for this release was made from the original camera negative which was scanned at 4K resolution and then utilised for the creation of this Ultra HD Blu-ray release. The disc presents a native 4K 3840 x 2160p resolution image in the widescreen 1.85:1 aspect ratio, and uses 10-bit video depth, High Dynamic Range, and is encoded using the HEVC (H.265) codec. We reviewed the Region free UK Ultra HD Blu-ray release of Hellboy on a Panasonic 65DX902B Ultra HD 4K TV with a Panasonic DMP-UB400 Ultra HD Blu-ray player.


This is a stunning image

This new scan is wonderful, bringing out textures and colours never before seen. The opening is now nearly stark in its contrast with dynamite blacks and sheer whites – see how it highlights the reds of the Nazi flags and how vivid and bright they are. Indeed, the HDR and WCG really bring out the colours, soak in how red Hellboy is, how blue Liz’s flames are and how teal Abe now is. The intensity of the portal or the flames are something to behold, given all the more prominence due to the incredible black level, which is pitch. White scale is just as well realised with no clipping. Flesh tones are a tad red, but this was always the case.

Detail is incredible; skin texture, be that human or demon, clothing weaves, stone surfaces, snow, book pages, all are beautifully rendered. The original source is in pristine condition, there are no digital issues, and the whole has a decent sheen of grain. In all, this is a stunning image.

The Dolby Atmos track is sensational! I’m going to go right in with the bass which is integrated perfectly and is as subterranean as they go, rattling the very foundations of the house, yet still maintaining presence, finesse and control. LF effects are wonderful, while surround effects are suitably engorged with low end impact. Dialogue is clear and precise, dominated by the frontal array, but given the odd bout of directionality when required.


The Dolby Atmos track is sensational!

A wealth of extra features, both old and brand new for this release, spread over the two discs.


Guillermo del Toro's second foray into the comic book adaptations was with the dark Mike Mignola created Hellboy, a creature brought forth from another dimension but brought up by a human ‘father’ to fight evil. Despite the pantomime villainy of the antagonists, the masterful characterisation by Ron Perlman and intricate and knowing direction of del Toro ensure the film is action packed, comedic, insightful and eminently enjoyable.


The 4K UHD from Sony is an incredible package

The 4K UHD from Sony is an incredible package; the native 4K picture is stunning, with rich rewarding colours, pitch blacks and highly detailed; while the Dolby Atmos track has thunderous but controlled bass and immerses you in a 3D surround environment. The extras are immense, spread over both discs and cover just about every aspect of the film. Excellent!