It was never going to survive comparison to Del Toro, but it's hardly a complete trainwreck 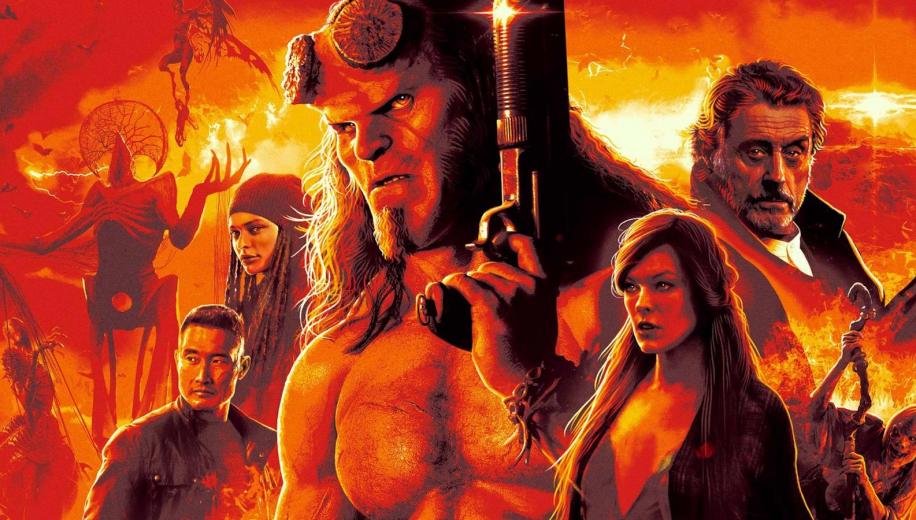 Despite being messy, this sequel turned reboot, which offended followers of the fan favourite franchise, isn't actually a complete write-off.

Let's face it: ditching Del Toro and Perlman was a bad idea, but it was also hardly an unsurprising one, not wholly unlike recasting Blade (despite Snipes owning that role). The first film was made 15 years ago; the second over a decade ago, and Del Toro had his own part to play in the delays in getting a third one off the ground, first seeing it fall by the wayside in favour of an abortive Hobbit project, and then putting the nail in the coffin when he didn't come back to do Pacific Rim: Uprising (a Hellboy sequel at Legendary was contingent on this). In the meantime, Perlman was pushing 70 and, whilst in great shape, hardly an A-list star from a studio POV.

Enter: director Neil Marshall and star David Harbour. Marshall had a great start to his career with Dog Soldiers, cementing this with The Descent, and even though his third film, Doomsday, was a mess, Centurion was hardly a disaster, and a big budget property could have finally given him the room to shine. And Harbour is a superb mainstay on the excellent Netflix show Stranger Things - the performance that got him this role - and would go on to communicate regularly with Hellboy creator Mike Mignola to figure out how he could make the character his own. Surely these two were a decent enough fit for 2019 replacements to Del Toro and Perlman?

Well, clearly the producers thought so, but only to a point, with heavily denied reports about on-set friction, script rewrites, producers giving performance suggestions, set design suggestions and even firing Marshall's regular cinematographer. And, of course, retaining final cut privileges over the director. The end result ought to have been absolutely unwatchable, so what we actually get - whilst pretty damn far from perfect - is something of a pleasant surprise in comparison.


The end result ought to have been absolutely unwatchable, so what we actually get is something of a pleasant surprise in comparison

The story certainly is every bit as convoluted as the last two mythology-packed outings, with Hellboy's 'father' (Ian McShane) frequently doing his best to explain the backdrop, involving Milla Jovovich's thousands-of-years-old Blood Queen (which was the original title, and would have been much better - Hellboy: Blood Queen) seeking vengeance on mankind after she was betrayed by Arthur and his knights. As she puts herself back together and unleashes havoc, Hellboy becomes part of a mismatched team whose plans to shut down the Blood Queen are complicated by her own intentions for Big Red himself.

Packed to the absolute brim with blood and eye-gouging (it appears to be Hellboy's MO), feverish flashbacks - which are, thankfully, often quite fun, mostly thanks to Harbour's wise-cracking Hellboy - this new outing juggles an ill-advised infusion of Arthurian legend (though after Transformers: The Last Knight, it could have been much worse than this), throws up some giant orc-like beasts for a decent midpoint action scene, and give us just enough McShane (joyously drifting into Deadwood territory for a few lines) to hold everything together long enough for Harbour to settle into the role.

The still-stunning Milla Jovovich is far from the trainwreck antagonist she could have been (odd Eva Green accent notwithstanding), you warm to the inimitable voice of Stephen Graham as the warthog thing, and it's nice to see Baba Yaga done justice. And whilst the Brit-pack buddies aren't great (accents are clearly a thing, as Daniel Day Kim's is appalling, and both him and Sasha Lane are wasted), and there is too much mythological exposition which drags down the runtime and fizzles to an anti-climax, Harbour's Hellboy still just about comes good as a character. He isn't Perlman, but somewhere between "I’d appreciate a prophecy with smaller and more relatable stakes" and "My therapist does say that I rely on jokes as a way to normalize" he manages to win you over nonetheless, and it'll be a shame if a flawed but watchable first outing pushed the franchise further into repeat reboot territory.

Hellboy comes to UK Ultra HD Blu-ray courtesy of Lionsgate, marrying up to their likely identical US release, and delivering an utterly stunning native 4K video presentation (yes, shot digitally at higher resolutions, it's one of those rare releases that actually has a 4K Digital Intermediate).


Whatever your thoughts about the film, this is a top tier video presentation

Right from the black and white outset, it's abundantly clear that this full-fat 4K presentation has the edge over its 1080p Blu-ray counterpart, with a noticeable uptick in detail pervasive on everything from creature and costume design to sets, allowing you to better absorb the visually opulent realm.

Of course HDR and WCG - with the added enhancement of Dolby Vision - take it even further beyond the realms of the SDR Blu-ray spectrum, affording brighter peaks that expand all the way down to the bottomless depths of the rich, deep and inky blacks. Colours are rich and vibrantly delivered, in this almost steampunk hell-on-earth realm, replete with wondrously medieval trappings, vivid primaries and, of course, Hellboy's own distinctive skin colour.

Flames pop from the screen, weapons burst with fiery explosive flourishes, and the 'hell' sequences offer some first-class representation of just what the format's tools can do to further make colours pop with vibrancy, as lava glows so intensely you can almost feel the heat. Whatever your thoughts about the film, this is a top tier video presentation. The aural accompaniment comes in the form of high definition object-based immersive audio of the Dolby Atmos variety, and it's every bit as impressive as the video, delivering the core elements of dialogue, effects and score with aplomb, and making good use of the 3D soundscape, with a weighty LFE backbone to the whole affair.

Dialogue remains firmly prioritised across the frontal array, only spreading out where the specific scene requires it, whilst the score - however generic - does a solid job keeping the momentum going, enhancing the action sequences and affording the film some manner of aural impact, all the while wielding LFE gleefully.

Effects are where it's at though, and the track does a commendable job immersing you in the surprisingly atmospheric environments, replete with finer nuances that creep around the surrounds, giving objects some measure of distinction when travelling across the array, and levying a measure of bombast courtesy of the LFE. Hellboy's boomstick weighs in on every confrontation, whilst the Blood Queen conjures up a storm or two, and the end result is an impressive aural ride. Porting the extras over to the 4K disc itself, we get a hefty feature-length 70+ minute 3-part Documentary, Deleted Scenes and a Featurette looking at the pre-viz storyboards There are a few franchise reboots, which just haven't gotten off the ground due to flawed opening chapters, where it might actually be better to get a direct sequel - which learnt from its mistakes, and wasn't dragged down by the trappings of an origin story - rather than wait another decade for a further shot at a reboot. And 2019's Hellboy might just be one of them.

Lionsgate's UK 4K UHD Blu-ray release of Hellboy delivers outstanding video and audio, as well as a surprisingly strong set of extras, leaving it an excellent package for fans to pick up. The film itself is hardly recommended, but lowered expectations may work a treat in this case.