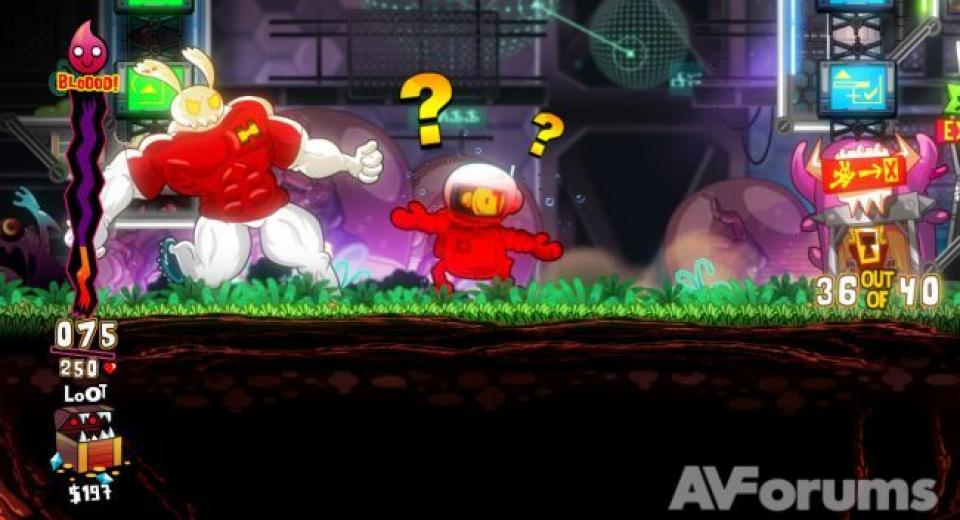 Back when I was studying psychology (circa 1832), I learned about a condition called visual agnosia. Wikipedia does a good job of defining it, stating it’s “the inability of the brain to recognize or understand visual stimulus." Basically, the sufferer can see, but can't make sense of the information. As a 19 year old, I tried to imagine what that must be like, experiencing the world as some kind of over-saturated amorphous blur.

Well I need imagine no longer because our friends at Arkedo Studio have developed a visual agnosia simulator to settle the question once and for all. Thanks to Hell Yeah! I now know what it’s like to experience the world as an over-saturated amorphous blur: it's confusing, frustrating and no fun whatsoever -- but more on that in a moment.

Hell Yeah! Wrath of the Dead Rabbit tells the story of Ash, the eponymous deceased bunny and prince of hell. After he's papped misbehaving in the bath with his rubber ducks (yep), Ash sets off to kill the hundred demons who saw the resulting pictures.

Although it could be said to be vaguely Metroidvania in design, Hell Yeah! is nowhere near sophisticated enough to be thought of as being a serious contributor to the genre.  Ash is armed with a circular saw/jetpack-thing and an accumulating arsenal of guns and missiles, which are either unlocked or purchased as the game progresses. Bonuses can be earned by managing The Island, which is populated by the bosses that Ash dispatches. But unless I missed something, I think you actually have to quit out to the main title screen to access it, meaning there’s never much motivation to go and tinker. The core gameplay requires Ash to travel from boss fight to boss fight, so it’s all the more disappointing that the design really falls apart during these set-piece combat sections.

Demons are usually weakened by Ash’s heavy weaponry, but can only be defeated by engaging in one of a number of (recurring) mini-games, many of which rely more on luck than skill. Fail and you’ll be thrown back into the fight briefly, before being able to retry. Although they may initially be vaguely interesting, these little tests of reactions or button-bashing prowess wear thin quickly and having to repeat them over and over is no fun at all.

On the subject of retrying, a striking ‘feature’ of Hell Yeah! is the decision to respawn Ash with minimal health after he dies. If the section following the checkpoint is particularly tricky, you’re forced to attempt a clean run, or to backtrack to find a health point somewhere. It’s a needless barrier to getting on with the game.

Encounters are generally accompanied by some banter but in truth the scripting epitomises Arkedo's missteps. Hell Yeah! is like the annoying guy at the party who lurks around the cool kids, describing himself as being "crazy" or "wacky" but doing little more than sporting an angular haircut and quoting months-old Reddit posts. The jokes and fourth-wall nudging meta-gags in Hell Yeah! miss the mark consistently, a symptom of its clawing desperation to be seen as credible by Generation Y. This is a game that is so keen to be loved, you'd be forgiven for taking out a restraining order against it. The platforming mechanics are solid enough. The jetpack/chainsaw Ash wears on his back makes jumping a floaty affair, which makes for reasonably precise control. However, this is undermined somewhat by occasional poor collision detection -- but it’s by no means game-breaking. The real problem is in the presentation.

I'm all in favour of colour in games, and have been fiercely critical of a number of titles for their tedious cataract-emulating palettes. But to say Hell Yeah! goes too far the other way is an understatement. Playability must come first. Having to endure environments that make it impossible to distinguish background from foreground, platforms from decoration, and enemies from inanimate objects is beyond frustrating. Like I said, a visual agnosia simulator, and -- at its worst -- no fun at all.

Some may argue that this review is unduly harsh. After all, Hell Yeah! is a downloadable title trying to compete in a tough marketplace by attempting to distinguish itself with a strong visual identity. For what it's worth, I'm not anti-quirk. Earthworm Jim was a favourite of mine in the 90s, and I reviewed Lollipop Chainsaw favourably earlier this year. The latter’s aesthetic pitch probably wouldn't have been entirely different from Hell Yeah!'s -- both are intended to be a kind of bubblegum horror -- but Lollipop Chainsaw succeeds by providing characters the player can invest in, drawing attention away from the merely functional mechanics and ultimately delivering a memorable, if flawed, half-a-dozen hours of gameplay.

I'm not saying no-one will enjoy Hell Yeah! because some players will undoubtedly be on the same wavelength as the developers. But I'd wager most seasoned gamers will not, so the best recommendation I can make is to steer clear. It’s not like there’s any shortage of alternatives in these Autumn months.

Some may be more sympathetic, but I found Hell Yeah! Wrath of the Dead Rabbit to be irritating, repetitive and unfunny. It's mechanically competent, and I'm confident that the final product is actually very close to the original vision. But if a game is to have such an obsessive focus on being stylistically unique, it needs to resonate with its audience and Hell Yeah! simply doesn't hit the right notes. One to skip, I'm afraid.