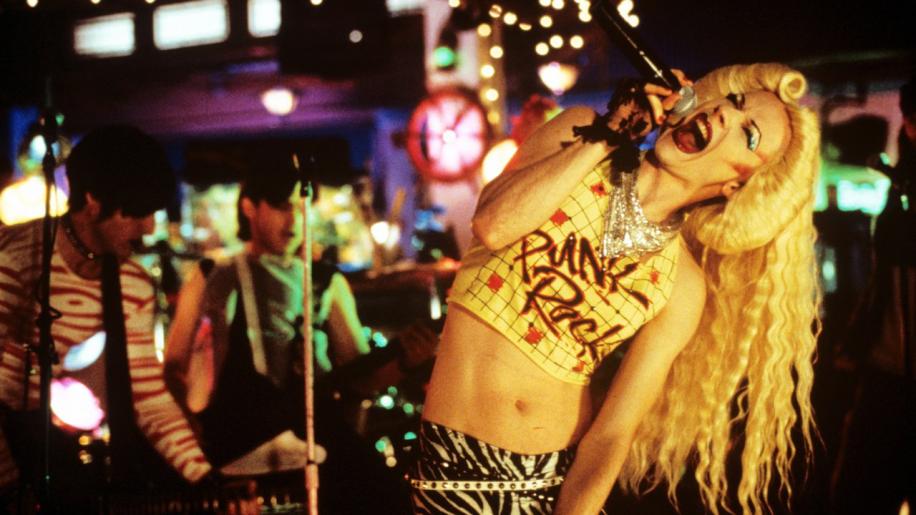 Hansel (Cameron Mitchell) was a young East German boy who dreamt of finding his other half. When an American GI falls for Hansel and wants to take him back to America as his bride, Hansel submits to a sex change operation which goes slightly wrong and leaves him stuck with the titular 'angry inch'. After adopting the name Hedwig and spending a brief period of relative bliss in a trailer park in America, her GI leaves her and Hedwig decides to pursue a career in music. She falls for a young boy (Pitt) who eventually leaves her, steals her songs and becomes a rock star. Relegated to playing gigs in the shadow of her protege's huge stadium tour, will Hedwig ever manage to find the international recognition which has so far eluded her?
It's unusual to get even one addition to the musical genre these days, but getting two in the same month is something of a miracle. Even more so when you consider how good both were. If Moulin Rouge is 2001's answer to the traditional musical, Hedwig and the Angry Inch owes more to the Rocky Horror Picture Show. But unlike Rocky Horror, Hedwig is brilliantly directed, features fully developed three-dimensional characters, offers a beautifully constructed story and electrifying performances. Couple all of this with plenty of irreverent gags, terrific moments of melodrama and a rousing mixture of punk music and ballads and you have a film which feels like nothing else currently out there... and that's definitely a good thing.