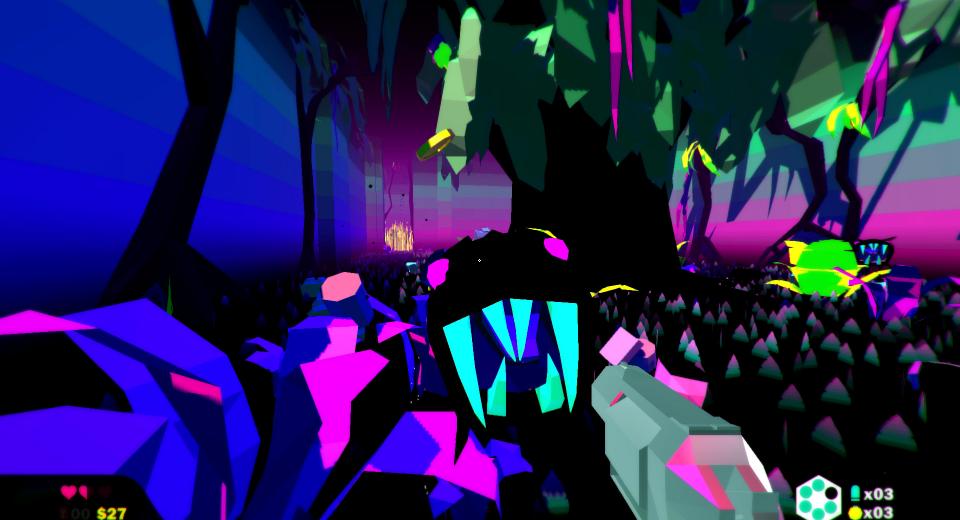 Through its low polygon count and neon colours it cuts quite a sight yet beyond the striking visuals it contains an impressively competent game. Never overstretching itself it keeps very tight and in doing so proves a surprising draw. Part of what makes Heavy Bullets so interesting is its ammunition, unsurprising given that its very name stems from it. For one, it’s highly limited. You start with a mere six shells to your name and although you may have played games with limited ammo before you probably have never done so quite like this as every bullet you fire has to be retrieved. Be it sunk into the face of an onrushing beast or embedded in the wall as you instead missed said onrushing beast, each shot fired will fall to the floor wherever its trajectory may end. With the chances of you finding extras lying around limited, they need to be recovered, too.

The whole premise leads to a heightened level of pragmatism when squeezing the trigger. I waited for onrushing foes to be mere steps away before dispatching them purely so I could easily pick up any expended ammo. Shots let off at range may be just as effective but with such limited resources I felt uncomfortable casting them so far away, fearing the trek could take me past as many if not more threats than I had ways of dealing with them. It may not strictly be a game for the cautious but those with a twitchy mouse finger may find themselves listening to the sound of an empty chamber narrowly before seeing a Game Over screen.

It’s clear that developer Terri Vellmann wants you to concentrate on your gun as furthermore every bullet has to be individually reloaded. During my first faltering steps I found it all too easy to forget, expecting a full clip to be replaced and being decidedly compromised when, at the crucial moment, I found it hadn’t. It became somewhat of a nervous twitch to fire and reload instantly but when you need to go and retrieve the bullets prior to reloading it can induce states of panic in particularly frantic areas. There you are defending against a fair number of threats and half way through the firefight you’re scrabbling on the floor looking for bullets as though you’ve dropped a handful of change when buying a train ticket and are desperately seeking out that elusive 20p, though this time the commuters you’ve embarrassed yourself in front of are actually trying to eat and/or shoot you.

This unique take on shooters couldn’t of course fit the moulds of the likes of a traditional Call of Duty deathmatch or Halo campaign, the sheer amount of bullets expended in the opening scenes of each pay testament to that. Heavy Bullets instead introduces you into its own world, one of simple rooms and a palette of colours last used readily on the ZX Spectrum. It’s extremely angular, with each wall coming off right angles from the last and reaching high into the sky, though variations come with little nooks and shifts in depth. Primitively shaped trees and rocks are scattered throughout too, each proudly showing just how few polygons they are made from and adding to the feeling that you’re prowling through a deadly walled garden. There’s no attempt to hide the pointed edges with shaders, it’s all part of the throwback style. The deadly fauna inhabiting the world exhibit similar features, wearing their vertices like a badge of honour. The basic threat appears to be a demonic version of ChuChu Rocket’s cat, a black and vaguely spherical feline with huge teeth that charges towards you, mouth chomping, the moment you catch its eye. Backing it up are large-fanged wasps hovering at head height, and strange insectoids with large legs that cower behind a defensive carapace before similarly dashing at you. They’re all relatively sedate adversaries should you see them before they see you. Very rudimentary AI cause them to advance in a straight line, making it very easy to predict their movements and meaning they should only be a problem if there are more of them than you have bullets.

In addition there are snakes that lie camouflaged in bushes, suicidal bomb bugs that dash towards you, and an armoured mole whose only weak spot is his delicate behind. Backing up their efforts are also a collection of static turrets that track your movements, whose sustained but periodic fire will see your diminutive health bar deplete quickly. Though all possess quite simple approaches to taking you down they can provide an uncomfortable mix when tossed in an arena together, doubly so when the turrets themselves sprout wings and become mobile deep into the game.

It’s at those points that all your planning can go to pot. It’s all too easy to fire off your precious ammunition and leave yourself unprotected as you circle strafe a turret, desperate to pick up just one bullet whilst avoiding the crafty snakes lying in wait in the surrounding flora. All those upgrades that you’ve bought can seem wasted but equally loading up with the right tools can save your life. A host of useful items are available from the vending machines found throughout the levels, from health potions to landmines they offer a way out. My frugal nature meant that I was forever walking around with a Last Will and Testament in my pocket - an item ensuring any cash scavenged wouldn’t be lost on the event of my death - but at other times opening a door and lazily sending in a homing bomb just to see the edge of an explosion ripple past the doorframe caused a wry smile. With only one or two spots available it again helps focus your play style and never allows you to feel as though you’re invincible. Compared to the very impressive procedurally generated wonders of Spelunky and Rogue Legacy, the maps produced in Heavy Bullets don’t compare. The level of interest required in the layout of a platformer is far greater than that of a shooter and here it manages to mask its simplistic floorplans with the odd trinket hidden down dead ends and a very garish colour scheme. Though it is undoubtedly a maze, the lack of any real definition or change in scenery does eventually feel as though you’re experiencing nothing new to complement the shift in enemies and so the sense of progression can be muted.

What does remain consistent throughout however is the wonderful sound design. The soundtrack that accompanies you is grand but it is the subtleties that I found most pleasing. The electronic whir as the cats notice you and spin to make their attack, the enthusiastic clinking of coins as they bounce on the ground, and the restrained tells of a snake lurking in a nearby bush. All are there to help guide you but equally add to the synthesised world that Vellmann has created. Although certainly striking it’s not the look of the game that should draw you to Heavy Bullets. Its interesting use of retrievable bullets and individually reloading each one helps to break modern conventions and forces you to think differently about how to approach this shooter.

Its miserly slant works well with its rogue-like structure, encouraging judicious use of resources whilst similarly amassing a war chest of coins so that when you do plan on a big adventure you can afford all the gadgets you’ll need to accompany you.

This is not a shooter for those awaiting the next annual Activision release, this is one for those wanting something a little different, a little more considered, and definitely a little more vivid.