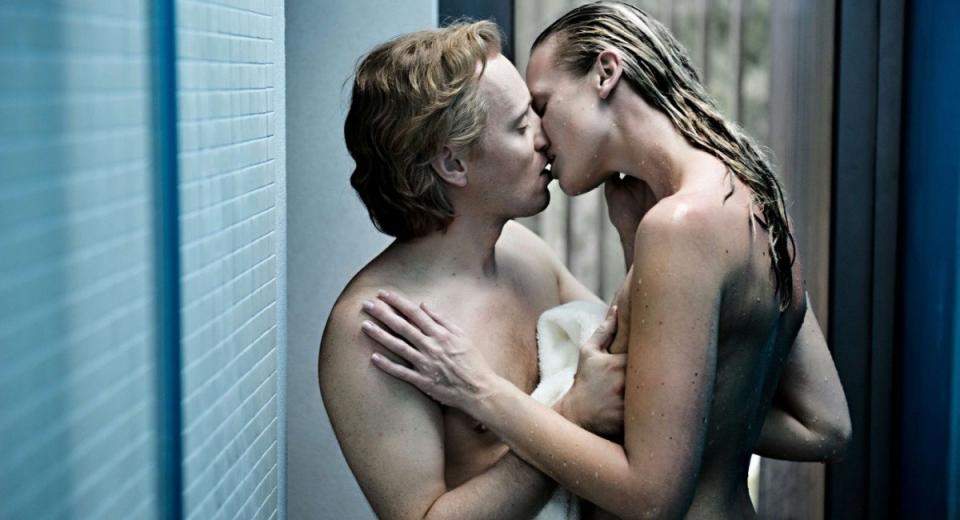 Fast-paced and frenetic, convoluted and contrived – but not unforgivably so – and darkly comic and pleasantly original, Nesbo’s Headhunters is an undeniably entertaining crime caper. Dark around the edges, but fluffy in the middle, it is both intricately structured and effectively twist-laden, and about one satisfying revelation away from being a great little gem, instead falling slightly short and landing on the side of just plain good entertainment. And there’s nothing whatsoever wrong with that.

The preposterous story involves Roger Brown, a corporate headhunter with Napoleon syndrome – he’s insecure because of his height – who also appears to be something of a corporate psychopath, clinically manipulating and mistreating his ‘victims’ at work, often to assist with his ‘hobby’ – moonlighting as an art thief. You see, after getting personal details regarding their whereabouts and itinerary, he then proceeds to rob his firm’s potential clients of their most prized paintings, replacing them with high class forgeries to delay the burglary being detected.

Why does he do it? Partly because he does not feel any moral compulsion not to, and partly because he has to maintain the lavish, expensive lifestyle to which his beautiful wife has become accustomed. He feels that without the money, she would have no reason left to be with him.

Committing these crimes with clinical precision and consummate professionalism, one day he thinks that he’s hit the jackpot. Commissioned to headhunt the smooth businessman Clas Greve, he discovers that Greve has a very rare, highly expensive original masterpiece at his home. Brown is determined to obtain this piece, and so puts together a plan to steal it. Everything appears to go well until people start popping up dead, and Brown finds himself very literally being hunted by Greve, himself an ex-Special Forces tracker. It would appear that this time Roger Brown has bitten off far more than he can chew.

Based on an original novel by acclaimed Norwegian author Jo Nesbo (whose Harry Hole series is due to be adapted for film by Martin Scorsese), Headhunters is a clever little Norwegian-German co-production directed by Morten Tyldum. Indeed the plot was so interesting to Hollywood studios that the rights were bought for a planned Hollywood adaptation before the Norwegian movie was even completed – although this is not wholly surprising given the recent spate of Scandinavian thrillers and corresponding Hollywood remakes, including the excellent Dragon Tattoo trilogy, controversially remade by David Fincher, and the acclaimed TV series The Killing, made into a US TV show by the same name. (Somewhat ironically, Headhunters even uses some of the stock footage from the original Swedish Girl with the Dragon Tattoo film, which would no doubt confuse anybody familiar with the intended location of the story.)

Despite the seemingly Machiavellian plot, the narrative of Headhunters actually develops in a fairly easy-to-digest fashion, adding increasing layers to the drama as we follow the lead character’s plight. In fact, it’s the character development that probably saves the whole film from being just another easily-dismissed – and eminently convoluted – crime caper.

Although it takes a while to warm to Askel Hennie’s Roger Brown – mainly because he is initially portrayed as little more than an amoral psychopath who doesn’t really care about anyone or anything – the unusual characterisation lends the production an intriguing edge. How is it that we are ever going to end up rooting for this little weasel? I’ll tell you how: by putting him through 96 minutes of pure hell. By the end of the film he’s been run off the road twice, attacked by a man-sized dog, shot, stabbed, barged off a cliff by a juggernaut, and buried in excrement. You’ve got to feel sorry for a guy who desperately tries to escape on a farm tractor, with an animal impaled on the front forks, in the full knowledge that his vehicle is only capable of about 25 miles per hour.

Opposite him we have the very determined hunter, Clas Greve, played by Game of Thrones stalwart, Nikolaj Coster-Walder (who you may also recognise from bit parts in Black Hawk Down and Kingdom of Heaven). Equally convincing when charming Roger Brown’s gorgeous wife off her feet as he is hunting down his prey like a relentless Terminator, Coster-Walder easily forges the suave Greve into a ruthless mercenary who makes Hennie’s initially unlikeable anti-hero seem like a naive rabbit-in-the-headlights by the end of the piece. (Although largely lost on Western audiences, the casting of Danish actor Coster-Walder in the role of the villain in this Norwegian production is apparently as ‘traditional’ as the casting of a Brit actor in the role of a villain in a Hollywood production).

Trapped between the two of them is the stunning tall blonde wife played by gorgeous newcomer Synnove Macody Lund. Although you initially assume her to be little more than a token accessory for Roger Brown to obsess over, Lund’s character is as developed as the others, proving to be an integral part of the proceedings, and indeed the part of Brown’s life that actually starts to make sense. In fact, as much as the thrilling, twist-laden, fast-paced event-driven narrative keeps you hooked, it’s actually the strange and disarming love story between these two that compels and endears the characters to you.

Unfortunately it’s not quite all good news because, at the end of the day, the revelations in the narrative are simply not strong enough to sustain the weight of all that improbability that has come before them. You expect a grand conspiracy, involving the authorities and clandestine organisations plotting to destroy these individuals; you expect a great big fat revelation which will tie everything up neatly and explain why Roger Brown has been hounded and harassed and hunted to within an inch of his life. Yes, things are tied up – and the twist is certainly surprising – but it’s all a bit convoluted and contrived, and it just doesn’t sit quite right. It’s just that little bit too anticlimactic for a plot with this much potential.

Furthermore, along the way, you’ve watched the protagonist go through absolute hell – and some of it is very serious – but there are moments where what happens to him is so extreme that you can’t help but laugh. The impaled dog; the excrement quicksand; the events that befall his only friend – it’s all a bit Coen Brothers, and not necessarily in a good way (less No Country for Old Men or Miller’s Crossing and more Barton Fink or Fargo), ill-advisedly robbing the serious drama of much of its seriousness. There’s a fine line when running a darkly comic theme, and Headhunters crosses it too often for its own good, leaving the end result just that little bit too fluffy to stand up as truly memorable in the genre.

Still, there’s no denying that this is a well-directed, well-constructed and well-acted production; an unusual little gem that is definitely worth watching. Just don’t expect anything deep, substantial or particularly rewarding. This is certainly a dark, compelling affair, but it’s just that little bit too fluffy in the middle, with nothing quite rewarding enough to bind it together. That it manages to make the weasely Roger Brown into a viable protagonist is a commendable enough fact on its own; that it takes the time to develop the characters in ways you might not have expected is even better, but unfortunately it does not quite make good on its striking trailer and favourable promotional quotes. Indeed I have to wonder whether it has enough substance to survive the (unnecessary) transition to Hollywood – with Tom Cruise rumoured to take the lead no less – but perhaps a few subtle but much-welcome amendments would turn this baby into a great film, rather than just an unusual and eminently good one.