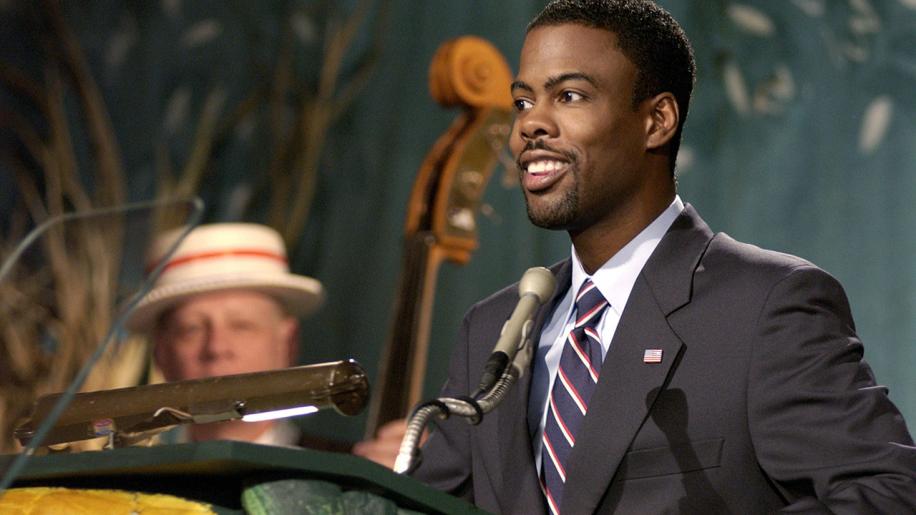 If seeing the names Chris Rock and Bernie Mac on the cover of this DVD fills you with horror, then you have good reason to be scared of this offering from Dreamworks studios. Written, produced, directed and starred in by Chris Rock, this is a slapstick political comedy with low aspirations.

Chris Rock stars as Mays Gilliam, a local politician - and bizarrely local hero, although we're never quite sure why - who is elevated to the heady heights of running for president. Quite how this comes about is loosely explained, but it revolves around the "power people" behind the scenes plotting for the next election, and needing a fall-guy. Mays Gilliam is their unfortunate - and I should mention black (yes, you guessed it, what comedy of this type could avoid dropping in the racial jibes? - "If I don't win there won't be another black president for 50 years!") - guinea pig, who from the outset is destined to lose the presidential race.

It's no surprise when things start going wrong as public opinion miraculously begins turning in Gilliams favour - strangely there are only two people in the race for president, the Vice-president being a cliched
highly-strung, out-of-touch-with-the-electorate type charicature. Enter Bernie Mac as Gilliams brother and newly appointed PR Manager, and things can only get worse..

Head of State is a poorly scripted ham-fisted attempt of a movie. I can only guess Chris Rock wrote the script (read: scribbled on the back of a fag packet) on a daily basis, just before the cameras were due to roll. Poorly constructed scenes and sloppy editing results in a disjointed mess of a movie which doesn't seem to know what it is. Outright comedy? Political satire? Or just a bit of silly fun with comedy aspirations? Actually silly fun is the best way to describe Head of State, except that the word "fun" doesn't seem to factor in the equation. The jokes and humour are mis-placed and simply not funny. I laughed not once in the whole movie, although the "24" in-joke made me smile (that's all I'll say on it, you'll know when you see it). Everything falls flat, including the cast of cardboard actors which only seem to be there as sideline decorations for Chris Rock, who features in almost every scene.

Fans of Chris Rock and Bernie Mac may find some entertainment here - although it's worth noting that Bernie Mac doesn't actually feature until an hour into the film - however everyone else will likely find this movie wanting. Unfortunately Head of State doesn't come anywhere close to being in the "So bad it's almost good" category, instead it's stuck firmly in "So bad it's just plain bad" territory. And if you think my attempt at humour is poor, just wait until you see the film.....