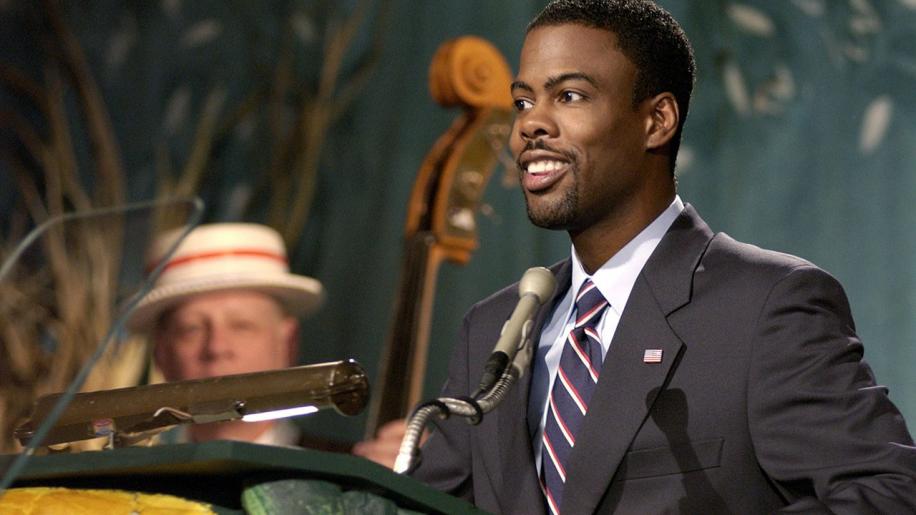 The video transfer on offer here is correctly framed at the theatrical 1.85:1 ratio. Presented to us in anamorphic, the print holds up well to scrutiny and is clean and generally artefact free. I say clean and it is -
colour saturation is generally good with Rock's boldly coloured tracksuits looking just that - bold and solid. Bernie Mac's gaudy green suit is a example of transfers managing colour bleed well (i.e there is none), but I wasn't altogether convinced of the colour of the suit itself. I'm not sure if it was simply the material itself, but the colour didn't quite look right (yellow also apparent?)

Another example of pleasing colour saturation is the "face to face" debate between Gilliam and the Vice-President. Shadow detail here is well defined, and the tone of the blue drapes behind the protagonists is rich and deep. See also the "School" (37:35) for good examples of solid colours: lots of strong reds here, with no perceivable bleeding.

Pleasingly, edge enhancement is almost entirely absent through the whole movie, although I did notice it on scenes where we see external shots of some famous American buildings: the building outlines suffer from very obvious haloing (and grain is present in some cases), and I get the distinct impression that some of these shots have been taken from different film stock, which is rather poor.

Otherwise, the transfer remains of reasonable quality. Relatively defect-free, but not one of the sharpest transfers around, it's a solid presentation if an unremarkable one.

Just as the movie is uninspiring (thats too generous), so too is the sound. I wonder if the sound engineers were either asleep during the mastering or simply didn't care, because what's on offer is a largely 2-dimensional affair. We have the choice of both DTS and Dolby Digital soundtracks, but unfortunately neither of them deliver. The action is largely locked to the front soundstage, and even then the steering is mushy, with little direction - it's a collection of missed opportunities, the most obvious being when Gilliam shouts "Security!" at several points in the movie. There's a cartoon-like whoosh, and the offender is whisked off the screen by suited arms. It could have been dynamic, the steering could have been crisp with obvious left to right panning. What we get instead is a mess, with no sense of depth or where the security guards are coming from.

Surround action is sparse and muted, on both DTS and Dolby Digital. Occasionally they spark into life, but this is generally confined to the Hip-Hop soundtrack (and repeating the same song several times is frankly pathetic, is this an advert or a film?), and a handful of other scenes, none of which stand out. LFE, too is restrained, although I would add that this really isn't that kind of film. When the low-end does kick in it's - again - during the hip-hop tracks, with the only other notable scene being "Independance Day Whitehouse" - the sound here is reasonably deep and kicks the surrounds into life, but it still sound muddled compared to explosions you'd see in a well-mastered movie.

All in all a very weak presentation. Comparing the DTS and Dolby Digital reveals very little in the way of differences. Both are laid-back to the point of almost being in Pro-Logic, however during moments involving music the DTS track sounds slightly more forward. It's not immediately obvious, but switching between the two options highlights that DTS is a little livlier than Dolby Digital.

On the back of the DVD Chris Rock's commentary is described as "outrageous", and in many ways it is. He sounds bored for the majority of the time, offering little in the way of interesting anecdotes on either the production or the ideas behind the movie. All we really learn is the names of the artists on the soundtrack, and that Chris Rock likes Sharon Stone. So yes it is outrageous. Outrageously bland.

Backing up the commentary is a 13-minute making of documentary, which is more of a puff-piece than anything else, also on offer are a number of deleted scenes: standard fare in that they don't really add anything to the movie, and if it interests you there are the usual cast and crew bios, as well as 2 trailers in pro-logic.This may be of interest if you're a fan of Chris Rock, but with an uninspiring and repetive soundtrack partnered with an average transfer and passable extras, most will find this release sadly wanting.