Head in the Clouds Movie Review 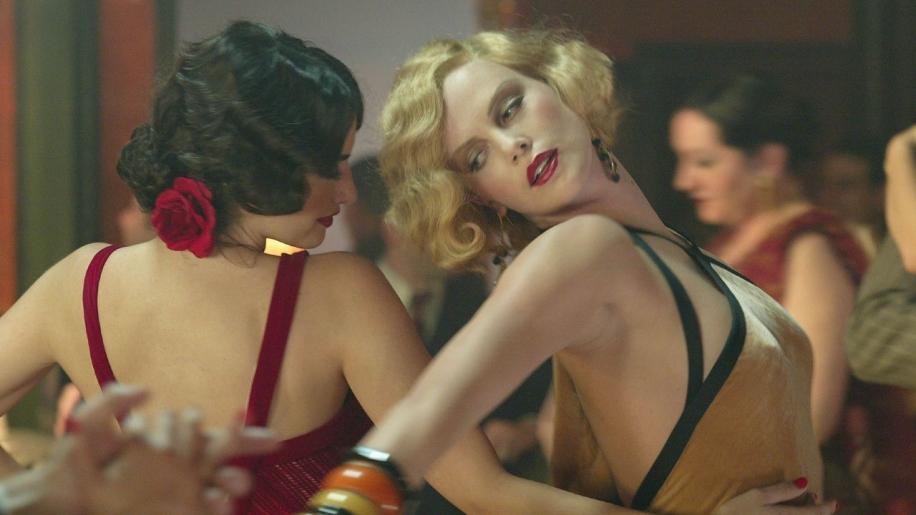 Wartime romantic dramas are a mixed bag. On the one hand, the life-and-death setting allows for heightened emotions and justifiably dramatic interplay between the characters. On the other, the overly syrupy sentiments that pervade movies like The English Patient have prevented me from ever wanting to re-watch it, despite some good performances and no matter how enjoyable it was the first time around. Similarly even the exquisite presence of the goddess Monica Bellucci could not save Malena from being a tough movie to revisit. Head In The Clouds brings together the lovely Penelope Cruz with the lovelier Charlize Theron in a dramatic wartime setting, but does it work?

It's thirties England and a hapless Irish student, Guy, finds his life turned upside down when a forthright rich kid bred in the States, Gilda, bursts into his apartment room one night. Despite the ongoing wartime strife that is going off around her, Gilda is a carefree capricious sort who would rather smile and wink and flirt frivolously than take anything in her life seriously - and pretty soon Guy finds himself both smitten by her and also confused by her 'free-living' spirit. When she goes travelling around the world, he thinks that he will never see her again and - for a while - he doesn't, getting on with his own life after graduation and becoming a campaign activist for the Spanish Civil War. After receiving a letter beckoning him to join her in Paris, Guy rushes to Gilda - his flames of desire still burning even after all this time. Still as free-thinking as ever, the two complicate their relationship with a third party, Mia, a Spanish model. Unbeknownst to any of them, fate takes a severe turn, changing their lives from whim and fancy into life and death, making Gilda suddenly stop and face the seriousness of the world around her, Mia choose between her friends and her country and Guy fight to keep his loves alive.

Head in the Clouds is a perfectly watchable if slightly vapid period drama. Following the lives of the three main characters is interesting enough but it is difficult to like or even sympathise with any of them, or consequently anything that happens to them. The central character of Gilda is probably most to blame because, even though she is written as a whimsical flighty floozy, she suffers because she has no redeemable features - other than the obvious in being played by Charlize Theron. Theron has done some pretty heavy-going movies recently, not least Monster, but while it is nice to see her get glamorous - and get naked - once again, there is simply no depth to her performance here. It seems like a bit of a step back for such a promising star and I hope that her lead in the upcoming cinematic interpretation of the strange but wonderful animation Aeon Flux at least gives her some action to make up for any lack in acting.

Stuart Townsend plays Guy just like he has played every other role in his career - with dopey nonchalance. Queen of the Damned, Trapped (which also starred Theron) et al. provide us with distinctly unexceptional performances from Townsend and here I wonder whether he really thinks that a dismal Irish accent broadens the range of his acting abilities. He would be wrong. This is the second time that they have played an onscreen couple and there is still no chemistry, not least because Theron is completely out of Townsend's league. Rounding off the purported trio we get Penelope Cruz, looking statuesque in her beauty but again being given little room to manoeuvre - in terms of character or even just plain screen-time. By the end of the movie you wonder why she is promoted as playing such an important character considering how relatively small her input is. I don't think I've ever seen her given the room to act as well as she did in Abre Los Ojos (Open Your Eyes, later remade into Vanilla Sky) and this movie certainly has not changed that track record. Finally, once again playing to his strengths as a caricature, we get a brief cameo by Steven Berkoff, hamming it up as Gilda's decorated French father. He seems like the only one of them suited to his role, even to his slightly strange new accent. Despite all the stifled talent on offer here - and the presence of the lacklustre Townsend - they still do somehow manage to make the film mildly entertaining for its duration, even if almost all of them could do better.

Aside from the average characters and performances, I think that the pacing was also a big problem. You spend the first hour wanting them to stop fooling around and waiting for something to happen then, when it does, the drama seems scattered and insubstantial, only becoming potentially involving for the climactic ending but, by then, it is too late. Despite all this, it is still shot so glamorously - to suit the period - that you somehow feel it is pretty enough to gloss over a distinct lack of substance. Unlikely to win any great awards or go down as providing memorable roles for all concerned, it sacrifices wartime drama for flimsy melodrama and lacks any real depth, but still remains marginally entertaining. Feeling like a wasted opportunity, it is merely yet another so-so historical romantic drama that gets a distinct ho-hum from me.