He-Man And The Masters Of The Universe: Season 1 DVD Review 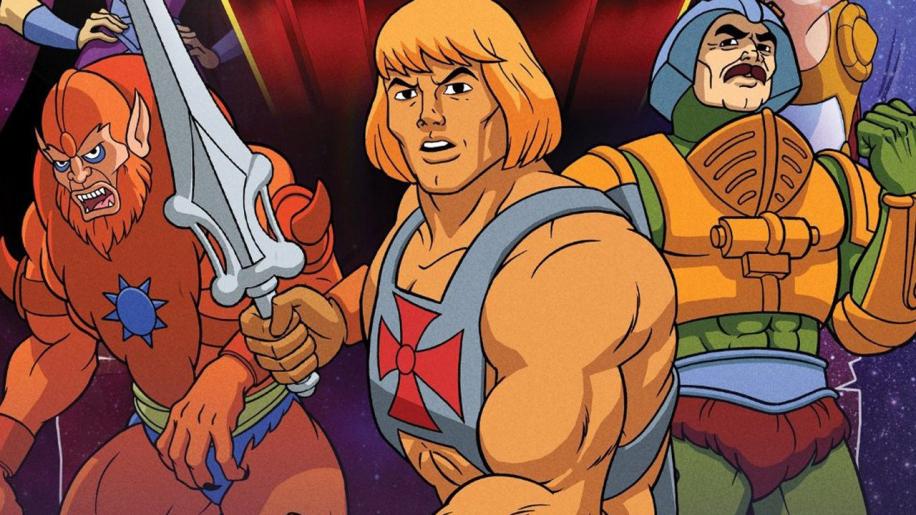 For a kids TV show from the early eighties, He-Man looks surprisingly good. Presented in non-anamorphic full-screen 1.33:1, the image is literally awash with gorgeously bright, bold and vivid colours. The true beauty of old-school animation shines through with a robust picture throbbing with life. Print damage, in the form of white spots and the occasional nicks and scratches are still in evidence, but it is safe to say that He-Man has never looked better.

However, the disc does have a few annoying problems. Sideways pans are often full of judders - and not all down to its NTSC origins - and there is some edge enhancement and a little bit of blocking in some of the deeper colours, the purples, the blues etc. But, I suspect that most of these errors are more readily apparent on larger screens. On the whole, I found the image very pleasing and quite well detailed, considering its vintage and modest source material. Personally, I had no great expectations of the DD 2.0 audio on offer here, but to be honest, I was actually quite impressed because it sounds pretty damn good. The track is reasonably loud and punchy, although separation is fairly limited. Dialogue always comes through clearly, though it can sound a touch harsh at times. The bass is hardly room-shaking but it is certainly adequate enough, with fx and score finding a nice level of depth. Occasionally I heard some popping, and a faint crackle, but this was nothing to be put off by as, on the whole, the audio was pleasantly warm, clean and buoyant.

I really think that this could have coped with, and benefited from, a full 5.1 remix, though. He-Man has quite a dense and effect-ridden soundtrack that would have sounded better with a widened range. Just wishful thinking, folks. The extras are to be found on Disc 6.

We get two mini-docs, the first of which is entitled The Secret Origins of He-Man and the Masters of the Universe. Running for 19.48 mins, this serves as an introduction to Filmation and Mattel's marketing master plan - a hit TV show with a ready-made toy line - but seeks to emphasise the creative challenge that He-Man head honcho, Lou Scheimer, set for his pro-social values fantasy-fest. Storming onto prime-time syndicated TV in a trend-bucking daily slot of 65 episodes-a-season, He-Man successfully broke the shackles of conventional Saturday morning kids programming. The proviso maintained that each episode had to have a moralistic life lesson, contain nothing that could be deemed detrimental to children, and action that couldn't be imitated by them. We meet the many staff writers, from Robby London - who confirms that nobody really knew who the real Masters of the Universe were meant to be exactly - Paul Dini (of Batman Animated fame), Michael Reaves and the sole lady, Janis Diamond. She says she was surprised to be the only woman on the staff team, but when that camera pulls back I can assure you that you won't be at all surprised why they kept her there. Can you imagine how she looked back then? Check out the photos of real-life bodybuilder/models posing in Eternia costumes - they were used for character profiles.

This is a nice, fairly detailed and candid piece about the less-than-humble beginnings of the pop-culture phenomenon, though the narrator informs us that there will be more in-depth coverage of the animation process in later docs on the future releases.

The second mini-doc, entitled The Stories of He-Man and the Masters of the Universe, runs for 27.16 mins and is a look at some of the key episodes and the thoughts of the people who wrote them. To be honest, this offers very little of interest, providing only a small degree of anecdote and insight into why certain steps were taken, and certain ideas employed, or ditched. The budget and the non-violence angle were tough obstacles for such creative and imaginative writers to overcome. But it is apparent how close the team became despite the creative differences that sometimes brought them and the show's producers into dispute. Can't use 'God' in a title. He-Man can't be seen to actually send his evil twin to his doom etc, etc. It's not bad, but hardly comprehensive and I doubt you'd ever refer back to it.

We also have Character Profiles, which offers us a choice of three categories - Characters, Artefacts and Creatures. You choose who you want and you are treated to a scrolling text biography, a picture and a very short video clip. It's fun for the kids to have a go at DVD navigation, I suppose.

There's also a rather nifty Storyboard-to-Episode Comparison for the great episode The Taking Of Castle Grayskull. This is a chance to use your angle button, folks, for a choice of three viewing options - I reckon side-by-side is best, myself.

The DVD-ROM stuff is a few complete scripts. Like you're going to bother. But there is another nice extra in the form of two tasty 4x6 art cards from Alex Ross and Bill Sienkiewicz. Oh, and a little trivia page that runs alongside the chapter headings for each episode.

It's a meagre assortment but some of it is very welcome. So long as you don't watch it a great marathon session - as it will get tedious, I assure you - He-Man has oodles of nostalgic, knuckle-headed fun to offer. The morals are a laugh and you really have to question the intentions of the writers sometimes. Kids aren't, and never were, that gullible. They might understand the ethics, but even they realise that a lot of this preaching means squat on the streets.

This box set is literally a work of art. It looks fantastic. Apparently, if you line it up on the shelf with the forthcoming editions, the spines join up to create a big picture. My money's on it being Castle Grayskull. The extras are nice, but given the effort they appear to have gone to, seem like badly cut-down versions of something much more comprehensive. Of course, the full set will have the real deal. Still, this is a great trip down memory lane. Good for father-son bonding, too, as I found out.