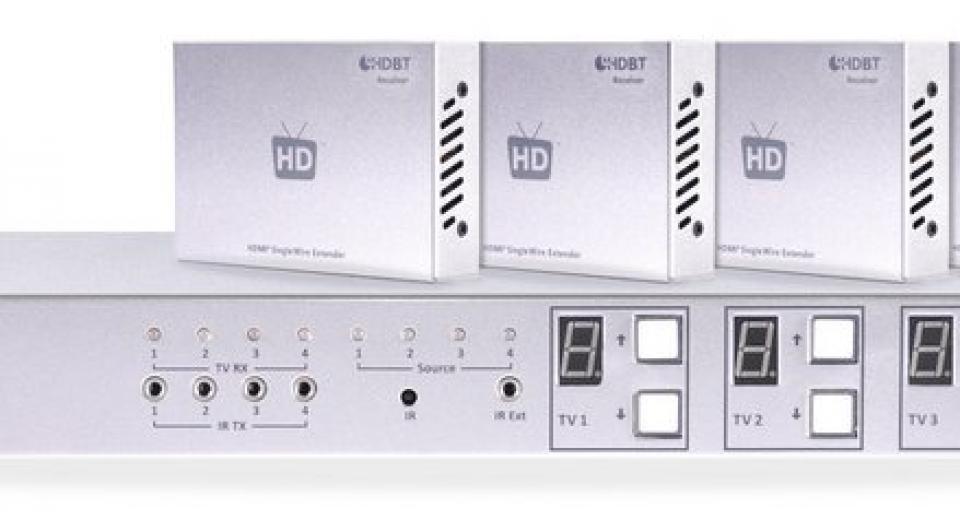 The idea of a truly connected home has been the dream of AV enthusiasts for years. As far back as the days of analogue TV, people were running aerial cables through splitters and boosters in an effort to have TVs in as many rooms as possible. There was something oddly satisfying about watching TV in the lounge, kitchen, bedroom or just about anywhere else, even if you did end up with a roof festooned with TV aerials. Pretty soon you had amplifiers with multi-zone outputs which meant you could pipe music to other rooms as well, as long as you were happy to lay down yet more cable. Times have moved on, of course, and now we have a myriad of devices providing video and music content. Luckily technology has kept pace and there are a number of ways of delivering all this content around your house.

Assuming you don't want to put separate devices in each room there are two ways of delivering content from individual devices to multiple displays around your house - wired or wireless. The latter option, in the form of a wireless HDMI connection, offers the simplest solution but this form of delivery can be somewhat unreliable and prone to issues in larger houses with thicker walls. So if you're looking for something a bit more robust, the best approach is to use the wired method and here you also have a number of choices. There are systems available that use either single coaxial cables or even your existing power cables to distribute HDMI around your home, which means you can plug the receiver into any power socket. However if you're in the position to wire your house up properly, then your best bet is to use a single HDBaseT Cat5e/6/7 wiring structure.

Once you have a HDBaseT Cat5e/6/7 infrastructure in place, you can then use HDanywhere's HDTV Multiroom Single Wire Distribution System to distribute the HDMI outputs of multiple devices around your home. The package comes with a central hub, to which you can attach up to four HDMI sources, and four receivers that can be placed in four different rooms to deliver the HDMI content to other displays. The system is robust and effective up to 100m and it supports all formats that can be passed over HDMI including 1080p, 3D and 4K (if it ever arrives). It also allows you to connect the internet via high speed ethernet ports and control the devices from other rooms via an IR passback. The system is compatible with universal remotes and it can be integrated into home control automation systems. It all sounds very interesting, so let's take a look and see how it works in practice.

The HDanywhere Multiroom+ system consists of a 4x4 central hub, four room receivers, a remote control, four IR emitters, five IR receivers, four DV5V power supplies for the room receivers and a power supply for the hub itself. The central hub is housed in a robust and well-built chassis measuring 317 x 156 x 28mm. The metallic finishing is well engineered and the unit has a solid feel to it, weighing in at 1.2kg. The overall appearance is simple but functional and at the front there is an On/Off switch, on the left hand side, and towards the centre there are a series of connection ports and LEDs. These four connection ports are for the IR emitters and the LEDs light up when the port is active. Next to these ports are four more LEDs, each relating to a different source and showing the status of that source. Beneath these LEDs is an IR extension cable port for the central hub itself. Finally, on the right are four indicators indicating what source input is being shown on each of the connected displays, as well as up and down buttons for changing the source input.

The four room receivers have the same metallic finish and well-built construction found in the central hub but they are appropriately small and discrete. At the front of each room receiver there are four indicator lights, one that confirms the HDCP handshake is complete, one that confirms the room receiver is connected to the central hub, one that flashes to indicate everything is working correctly and one that shows the room receiver is receiving power. Also at the front, on the right hand side, there is a connection port for the IR receiver and an IR extension cable port. At the rear there is an HDMI output which connects the receiver to the display in that particular room, as well as the HDBaseT Cat5e/6/7 input from the central hub. There is also a socket for the DV5V power supply and two ethernet ports for connecting the receiver to internet capable devices in the room.
The Multiroom+ system comes with one remote control for the central hub, although additional remotes can be purchased. This small black remote control is solid, compact and simply laid out and allows you to select the source input for each of the four room receivers. You can control the central hub directly or through the via an IR receiver attached to the room receiver itself.

Obviously before you can setup the Multiroom+ system you will need to ensure that there is HDBaseT Cat5e/6/7 cabling running from where you will be positioning the central hub out to the rooms with displays. The system can support cable runs up to 100m and once the cabling has been installed, actual setup of the Multiroom+ system itself is very easy. However it is important to note that the initial powering up and initialising of the system is crucial to its future operation and performance. The central hub includes a small memory which stores the initial handshake negotiations and authentications between the connected devices and displays, in order to aid faster switching times.

The process for first powering up and initialising the Multiroom+ system is as follows - power up the HDTVs and bring them out of standby and then power up the room receivers, followed by the HDMI sources. After that you connect the power cable to the central hub before finally powering up the whole system using the manual power 'on' switch on the front panel. On the initial power up, all 8 LEDs on the front panel of the central hub will light up in solid blue, whilst all the numerical LED displays will momentarily read 0 and then change to 1. If less than four HDTVs are connected, the numerical indicator for the unconnected ports will display 0 and there will be no corresponding blue LED on the central hub for the unused room receiver. In addition, the blue LEDs will only illuminate when an HDMI device is connected, any spare HDMI ports remain unlit.

If at any time a connected source or display is changed to a different HDMI input or is replaced with a different model, it is recommended that you perform a factory reset and reinitialise the entire system. To do this you need to power down every device connected to the central hub and then power down the hub itself. Leave the hub off at the mains for at least 10-15 minutes and then reconnect the central hub and power up again as if it was the first time. The system is designed to be left on and as such has very low power consumption but if you do leave the system off at the mains for more than 15 minutes you will need to repeat the initialisation process. You should NEVER 'hot-plug' the HDMI connectors or Cat cables - always ensure the central hub and room receivers are powered down before plugging and unplugging any cables - otherwise this could affect the performance of the Multiroom+ system. The manual includes a few tips for setup, including ensuring that any HDMI link, HDMI control or CEC protocol settings are switched off. It also suggests that the most commonly used source be connected to HDMI input 1 but if you have a satellite receiver, they suggest you always connect this to HDMI input 1. For 3D Blu-ray, the manual recommends high speed HDMI cables with lengths of less than 8m and also says that HDMI cables over 15m in length should never be used under any circumstances.

The HDanywhere Multiroom+ system is one of those products that does exactly what it claims to in the advertising. It is easy to set up (once you've run all the cable) and even easier to use, delivering flawless performance all of the time. Switching between sources was easy, either manually or using the remote control and we never had any problems with HDMI handshaking. We used a Harmony

One programmable remote to control all the sources and the central hub itself from different rooms via the room receivers and everything worked first time. As long as you follow the simple instructions and ensure that all the cabling has been laid correctly, the entire system is very robust and we never had any problems with interference. We found switching to be both quick and effective and far better than other distribution systems we've experienced, so clearly the HDCP buffer memory was doing its job well.

Overall we found that the HDMI signal was passed with no loss of quality which should be expected given its digital nature. We connected our MP500 signal generator to one of the HDMI inputs which allowed us to pass multiple resolutions without any problems whatsoever. We watched a large array of different content, including 3D, as well as a multitude of audio formats up to and including 7.1-channel lossless audio, without any issues. In the end, the Multiroom+ system did its job exactly as advertised and from a reviewer's perspective you couldn't ask for anything more.

Whilst you need to connect up your home first, using HDBaseT Cat 5e/6/7 cabling, once that is done setting up the Multiroom+ system couldn't be easier. As long as you follow the simple instructions and initialise the system correctly, the buffer memory in the central hub ensures quick and trouble free switching between HDMI sources without HDCP gremlins. The IR emitters and receivers mean that you can control the sources and the central hub via the room receivers using either multiple remotes or, more sensibly, a programmable remote. We used a signal generator and multiple HDMI sources to test the system and we found that it performed flawlessly, delivering whatever content we set without degrading the video or audio in any way.

Obviously, since the system uses IR emitters and receivers, it can't be used with an RF remote control like the one available for the PS3 but this is a very minor quibble and aside from that we could find nothing to fault in the HDanywhere Multiroom+ system. The only other point worth mentioning is the price because some people might baulk at spending £1,500 on a distribution system. In fairness to HDanywhere we have seen distribution systems far more expensive than this but it is still a lot of money just to distribute HDMI to four rooms. The only other problem is the fact that the system is restricted to four rooms but if you want to distribute to more rooms, HDanywhere also make a Multiroom+ system that can deliver HDMI to eight rooms. However this system costs an eye watering £7,000, which makes the four room system look cheap, although why there is such a large difference in price is something of a mystery.

Ultimately, the HDanywhere Multiroom+ distribution system is one of those products that does exactly what it claims to in the advertising. It effectively and robustly distributes content from up to four HDMI sources to HDTVs in up to four rooms around your home, without falling foul of HDCP or degrading the signal.