"This is the feeling I have been searching for my entire life, for as long as I could remember." 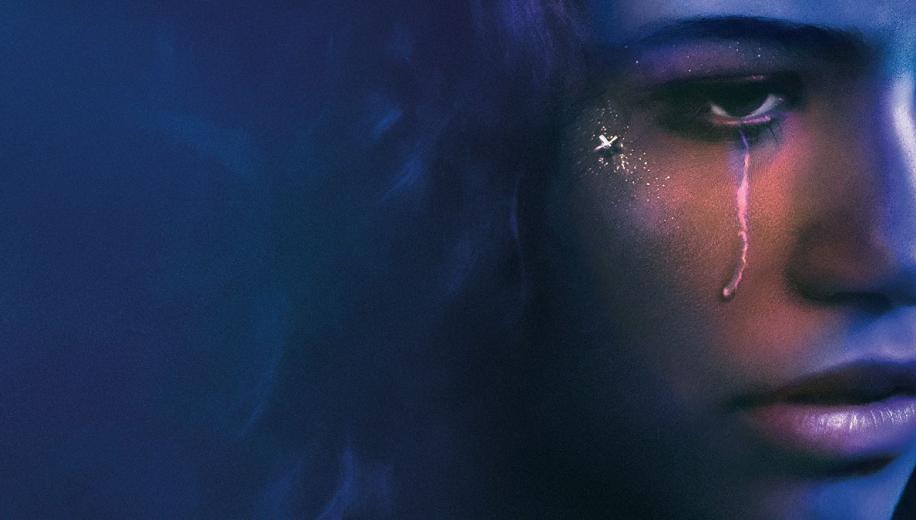 HBO's latest show, Euphoria, hits NowTV/Sky and proves more than just a US answer to the UK's Skins, affording a stylish and compelling look at damaged teens messily navigating life.

Sure, we've been here before, numerous times - the troubled teen, experimenting with drugs and sex, enduring school, exasperating parents, and threatening to derail her life even before its gotten started - but HBO's Euphoria finds a way to throw it back into a blender and come up with something that's still strangely compelling, without being insufferably derivative.

The story follows Zendaya's precocious teen, Rue, who's had a tragic but not inescapable path to drug addiction, but who just doesn't want to escape it, as she deals with the fallout from her latest overdose (which her kid sister witnessed); having to figure out how to fudge her addicts anonymous meeting attendances, pass her mum's regular urine tests, and convince her dealer - who actually thinks she's not going to find what she's looking for in drugs, and wants her to stop - that she's good for the next hundred bucks' worth. As well as deal with a school routine which she appears to just sleepwalk through (or, in one fabulous monologue, black out through). Will life one day give her a kick upside the head which she just can't shake off? And will she even care?


An increasingly intoxicating look at the horrors behind the teen curtain

Euphoria throws a lot of characters at you, but doesn't necessarily expect you to latch on to them all immediately, instead offering Rue up as the backbone to the story - it really is her narrative; even other characters' stories are played out as if it's Rue's future memories "She would later tell me what happened that night" - and gradually colouring in around her. The result is curiously compelling, taking you on this slightly otherworldly voyage to a valley of body-perfect teens (the token 'fat' boy and girl stand out a country mile, and there's little gradation between) who are almost universally damaged goods, displaying the effect that this damage does, in terms of violence, obnoxiousness and "rapey" behaviour (as one of the characters puts it), before slowly revealing what brought them to that point. Hell, even one of the nastiest of the people introduced gets a strangely melancholic speech reflecting to his 'prey' that she should choose a better path in life lest she end up just like him. Zendaya certainly doesn't win you over with her behaviour. She's sometimes quite a horrible girl, despite the tragedies she's endured, which are drip-revealed over the first few episodes, but she's still strangely relatable when it comes to her many bad decisions, and probably relatively authentic in terms of adolescent behaviour. Her exploits too, perhaps like those of the characters in Trainspotting, are eminently entertaining - it's compelling to see how she evades the urine test, or dances (literally) around the walls and the ceiling when she's high, or the montage of her experiences riding a push-bike when wasted. At times it could easily be a (great) teen Trainspotting saga, albeit laced with plenty more genuine tragedy and horror.

And there's more horror and tragedy to be found in the lives of those around the central character of Rue, with newcomer Hunter Schafer perfectly playing Rue's soon-to-be new best friend, the new girl in town, Jules, whose secrets are quickly revealed for those with eager eyes, but whose character is actually wonderfully integrated at a time when this kind of thing is usually handled in a much more obtrusive fashion. Jules is great, and utterly tortured in the path she chooses (although perhaps has little choice over), which becomes inextricably locked with that of college alpha male Nate (Jacob Elordi), whose own initially somewhat generic bully behaviour becomes clearer with revelations about his father (Eric Dane).


At times it could easily be a (great) teen Trainspotting saga, albeit laced with plenty more genuine tragedy and horror

The 'main' group of girls are less easy to get on board with - although certainly no less so than the jocks who hang around together topless for seemingly no other reason than they're prepping for a reenactment of the volleyball scene out of Top Gun - but slowly get their time in the limelight too, and Zendaya carries the whole thing with an air of authority and confidence in her acerbic narration that leaves her impressive but nascent performances in Spider-Man: Homecoming and Far From Home in the rearview mirror.

Created by Sam Levinson, the son of Barry "Rain Man" Levinson, fans of the newcomer director's sophomore theatrical feature - Assassination Nation - may see familiar under- (and over-) tones here, particularly when it comes to the pervasive effect of the internet on teens, and the public damage it can do in social and college circles; the lives it can veritably ruin. There may not be as many guns here, but Levinson still slow-burns his warning shots, whilst crafting an increasingly intoxicating look at the horrors behind the teen curtain.