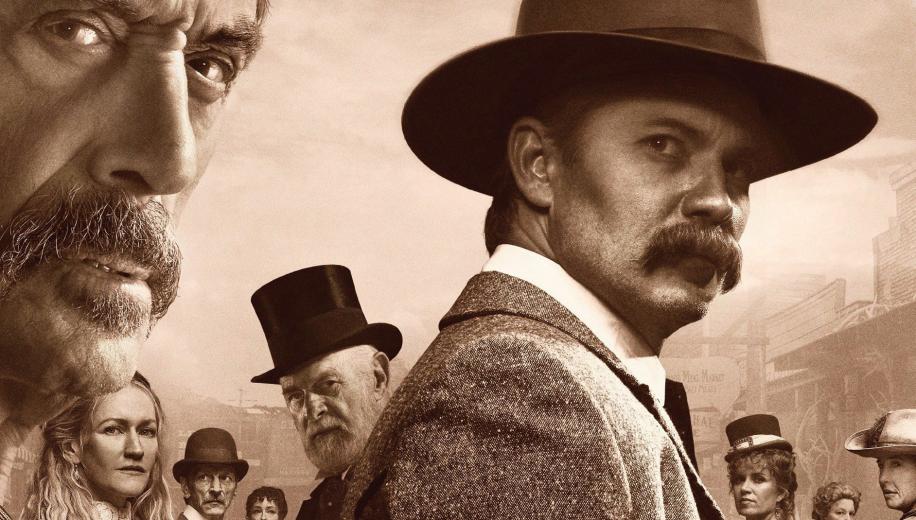 Over a decade after it was abruptly and inauspiciously cancelled, David Milch's seminal Western TV series finally gets a fitting TV movie finale.

David Milch created - and wrote - some of the greatest TV of the 80s and 90s, pioneering some tremendous cop and lawyer shows, including Hill Street Blues, L.A. Law, Murder One and NYPD Blue - running for over 250 episodes. Arguably one of his finest creations, however, was the 2004 TV series Deadwood.

Although ostensibly charting the life of celebrated gunslinger Wild Bill, the series was actually much bigger than any one name, single-handedly giving Ian McShane his career second wind (without this, we'd have never seen him in the likes of the John Wick film series, or basically stealing the show in Amazon's TV series, American Gods) and becoming a defining platform for Timothy Olyphant (who would compound his go-to role as a tough Marshal in Elmore Leonard's Justified TV series). It charted the rise of a small town in the West, peppered with competing brothels, corruption, crime and a desperate desire to bring some civilisation to the dirt town.

The show ran for three excellent seasons, driven by memorable - and unique - dialogue, as well as pitch-perfect characterisations, facing its biggest antagonist in the final season, industrialist George Hearst, who was powerful enough to destroy anything in his way. Unfortunately, a fourth season was not forthcoming, and the show ended on a distinct anticlimax, with Hearst tearing through the camp and then leaving; his crimes never fully addressed, leaving a sour taste at the end of such a great show.


Thirteen years later and Milch was finally able to complete the journey, bringing back almost the entire cast, and delivering a fitting finale

Thirteen years later and Milch, tragically recently diagnosed with Alzheimer's, was finally able to complete the journey, bringing back almost the entire (surviving) cast - who have, by all accounts - all been game for a return, and delivering a fitting finale, set 10 years after the last time we saw this colourful crew of characters.

The story sees George Hearst riding through town a celebrated and even more powerful senator, with the intention of buying up land in Deadwood to complete the phone lines running across the country, facing opposition from old enemies, and dealing with it in the only way he has ever known how, forcing Olyphant's Marshal and McShane's bar owner to formulate plans on how to stop him once and for all. It's both amazing, and sad, to see Deadwood return. This is, after all, what fans have been hoping for all this time, but after the first decade passed, it seemed an impossible ask. Fans, understandably, gave up and moved on. Now it's finally here, there's an air of tragedy that it took this long - this is the ending that fans have always wanted, but it's almost as if it has been stuck in a time capsule for more than a decade (along with the characters therein).

Milch may have written this in the last few years, but it feels like a tweaked version of whatever he must have had in mind for a fourth season finale - had they greenlit another year. It's a logical progression for the characters, with many facing tragedy, and many coming full-circle. It just took longer than it should to have come to fruition.


Perhaps fans shouldn't have had to wait so long for this fitting finale, but now it's here, it is an undeniable relief that it proves every bit worth the wait

Boasting a bigger budget than possibly the entire third season, the only other tragedy - aside from the wait - is that is only 106 minutes long, which is barely enough time to re-introduce all of these beloved (and utterly, utterly, despised) characters. Still, Milch doesn't waste a minute, interspersing a few flashback clips for those who haven't revisited the show of late, but often playing them out across new dialogue so as to keep the momentum going. It takes but seconds to feel at home once again in this small yet now bustling town, with all the familiar albeit aged faces and, by the end of the first act, the tension is as high as it's ever been in the series, affording a tremendous crescendo which climaxes in expectedly brutal fashion.

Reportedly, the last piece of work we will get from Milch (a further tragedy), at least he's going out on a wonderful high, delivering amongst his finest writing, and rising to the challenge of being constrained by having to fit so damn much into such a short runtime. Perhaps fans shouldn't have had to wait so long for this fitting finale, but now it's here, it is an undeniable relief that it proves every bit worth the wait.