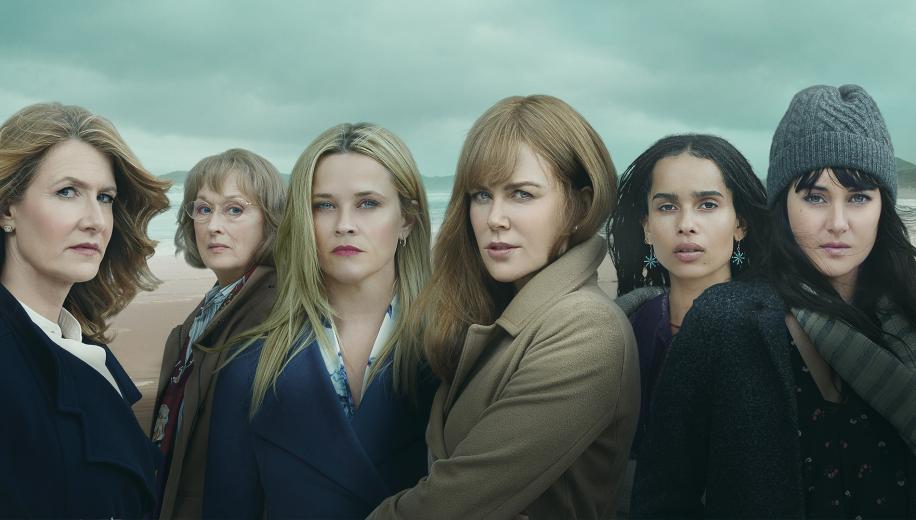 Although right from the very first episode of Big Little Lies' first season, the non-linear flash-forward storytelling informs us of a cataclysmic event - a murder at a school trivia night - the actual victim is not confirmed until late on. Hardly a surprise after a few episodes, it would be still advisable not to jump straight into the second season and thus not to read a review of the second season without having seen the first. You have been warned.


The second season changes pace - having already justified the actions of its protagonists, it now seeks to undo them through their own lies - which makes for compelling viewing

Created and written by David E. Kelley (whose heritage goes back to the days of The Practice, but more recently helmed Amazon Studios' excellent Billy Bob Thornton vehicle Goliath), and based upon the bestselling novel of the same name by Liane Moriarty (whose story was not completed in the first season), Big Little Lies focusses on a group of disparate parents - headlined by the trio of Nicole Kidman, Reese Witherspoon and Shailene Woodley - who initially only have their kid's school in common, although, by the end of the first season, it becomes clear that they end up with a murder in common too.

It's life as normal for social enemies-turned-unlikely-best-friends-through-tragedy, bringing their kids back for a new year, and trying to move on like nothing happened - let alone a murder. With the police seemingly happy to rule it an accident, the three main women involved in it appear - ostensibly - content to perpetuate the lie they told, rather than let the truth unravel all their darkest secrets, including the fact that the victim was an abusive husband to one and rapist to another.

Unfortunately, that complicates things when his mother turns up on the scene, seemingly offering comfort to her grieving daughter-in-law, but slowly and doggedly intruding on this close circle of confidantes, desperate to shine a light on what really happened to her precious boy. Making matters worse is the fact that a fourth woman, also involved in the incident, is struggling to contain the lie, allowing it to spill out into her marriage and flirting with the idea of confessing all to the police, even though the ramifications on all the people she knows would be far greater now than if they had all told the truth in the first place.


Streep is excellent, and despite the already tremendous cast, she absolutely steals the whole show

Big Little Lies initially built up to its dark reveals, teasing the impending trauma through flash forwards, and infecting its tone with memories of a horrific rape, but busying itself with seemingly innocuous bitchiness at the start, before unravelling its core of abuse in a horrific fashion. The second season changes pace - having already justified the actions of its protagonists, it now seeks to undo them through their own lies - which makes for compelling viewing even if its tragedy no longer appears to focus on moral justice.

The all-star cast returns to their roles as if they never left them, with Nicole Kidman, Reese Witherspoon and Shailene Woodley enjoying some great chemistry together, whilst Zoe Kravitz (Fantastic Beasts: The Crimes of Grindelwald) gets the juicier role as her character goes slowly off the edge. It's the new addition of Meryl Streep that really shakes things up, however, with her seemingly docile but secretly very aggressive grandma tearing a chasm in the group, and picking them all apart, one by one. Streep is excellent, and despite the already tremendous cast, she absolutely steals the whole show.

Even only at the outset of this 7-episode second year, it's clear that showrunner David E. Kelley - who has written every single episode - and second season director Andrea Arnold (who did the stunning Fish Tank) are intent on making this an equally dark ride, jarringly, but effectively interjecting immediate moments of sobering reality and palpable revelation into the ostensibly convivial meetings between the characters, and keenly focussing on the nightmares that so clearly haunt them. The cast may not have enjoyed all that much Big Screen success over the last decade (Kidman's finally come back with Destroyer and mainstream success in Aquaman; Woodley's Divergent series crashed and burned, but she has enjoyed smaller success with the likes of Adrift; and Witherspoon hasn't done anything of note in years) but they all enjoy some of her best work here.

Initially expected to be a mini-series, Big Little Lies makes a welcome return to complete its journey and, hopefully, it will be able to do so without losing some of the potency of its opening salvo.