"Your problem is branding. Your whole thing is that you're low-key. It's a very hard brand to sell." 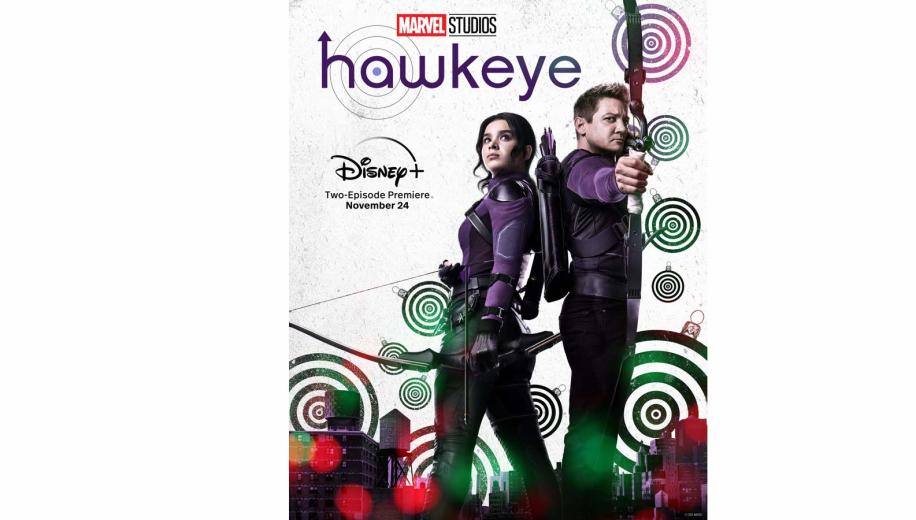 In the comics, the character of Hawkeye was fabulously well served, at one point - unarmed, tortured and bound - using his fingernails to dispatch a room-full of armed guards and escape. In the MCU, he's never quite come into his own, but for perhaps in his vengeful stint as "Ronin", underserved in much the same way - although arguably even moreso than - Black Widow (whose solo movie was undoubtedly a couple of phases too late). Star Jeremy Renner - who wowed audiences pretty early on in Kathryn Bigelow's The Hurt Locker - never quite struck gold whether it be in taking over from Matt Damon in The Bourne Legacy, or getting his own solo MCU outing. And now, much like the Black Widow movie, despite being called "Hawkeye", this is as much an origin story for the next Hawkeye, as it is a long overdue chance to spend a little quality time with the old one.

... They keep this going, and it could end up being something quite special

Back when the Avengers saved Manhattan, a young Kate Bishop watched her whole life change in the blink of an eye, losing a loved one and gaining a glimpse of what she wanted her future to look like in the form of the superhero archer Hawkeye. Now, all grown up, and suspicious as to the shady dealings of her mother's new fiancee, Kate ends up in a world of trouble, drawing the attention of a former Avenger who is wondering why somebody is running around town wearing his old costume.

Hawkeye comes to Disney+ in 4K Ultra HD with Dolby Atmos and Dolby Vision (both of which were not available first thing on this morning and took an hour to be added). It looks unsurprisingly tremendous in 4KDV, with a warm Christmassy look, a very cinematic 2.4:1 ratio - which adds to the extended-movie vibe - and some nice DV vibrance underpinning the palette (it may not be steeped in neon, but even little things like Father Christmas costumes look richer). Black levels are strong and deep, and production values are such that this could comfortably sit next to the movies, particularly the recent Black Widow.

Hawkeye takes its time introducing you to the new character, not desperate to build the real threat quite yet, and instead prepared to allow Hailee Steinfeld to warm to the role, which you realise - come the end of the second episode - was actually a very wise decision. Steinfeld was almost the entire reason why Bumblebee remains the only memorable Transformers movie in years (if ever), bringing a similarly fabulously quirky charm to her role as Kate Bishop here. She plays brilliantly against Renner's perpetually serious Clint, with their back-and-forth on his lack of branding a wonderfully meta reflection on just why Hawkeye never really came into his own as a character, further hinting that maybe Kate will be the one to change that, as nascent a look at her variation as this is.

... much like the Black Widow movie, this is as much an origin story for the next Hawkeye, as it is a long overdue chance to spend a little quality time with the old one

As difficult as ever to judge based on just two episodes, with the full knowledge that there are only 6 in the chamber in total, this may well be the kind of Christmas-themed production worth saving to binge over the festive period itself. It would be easy to see how it might play out as one long movie-sized story - perhaps even more than any of the other Marvel Phase Four small-screen outings, with Falcon and the Winter Soldier arguably closest in structure, but, even then, ostensibly larger in scope. That's no criticism though, a Hawkeye 'movie' over Christmas, injected with a hint of Shane Black-esque wit (more of that wouldn't go amiss), plenty of quirkiness (not just for Steinfeld either, with Renner's tour in faux combat a highlight), some nice nods to the past (not quite the PTSD of Shane Black's Iron Man III, but still comparable), and decent, grounded action, may be just what we need. And this is merely act one, barely first blush, yet it still leaves you wanting more, whilst also playing out as something a little bit different from the other shows under the Phase Four umbrella, which is pleasant to see. They keep this going, and it could end up being something quite special.

EDIT - FULL SEASON REVIEW - Well, Hawkeye really didn't disappoint. Sure, it's still not quite as Shane Black as some might have hoped for and, yes, it's missing that final stinger that might have tied it into all the other MCU shows but these are minor niggles in what is really a very good "ground level" MCU show, far, far better than Falcon and the Winter Soldier and arguably the most "fun" of all of the shows - even the imaginative Wandavision and the time-bending Loki. Steinfeld really comes into her own across the six episodes, and - between this and a couple of excellent moments in What If...? Jeremy Renner's Hawkeye has finally been done justice. The comedy - and heart - is spot on, and the tie-ins to the larger MCU (larger than many might have previously assumed, come the end of Episode 5) are absolutely worthy of an air punch or two. Every single one of the surprise cameos brings a grin, and even the extended Avengers Broadway Production is a fun inclusion. Just like What If...? gave us a look at an Ultron who was a genuine Thanos-sized threat, Hawkeye has given us not one but two Hawkeyes that we would actually like to now see more of. And just in time for Christmas too. It will be very interesting to see what the New Year brings.

Hawkeye is on Disney+ weekly in 4K Dolby Vision with Dolby Atmos, with the first two episodes available 24th November.