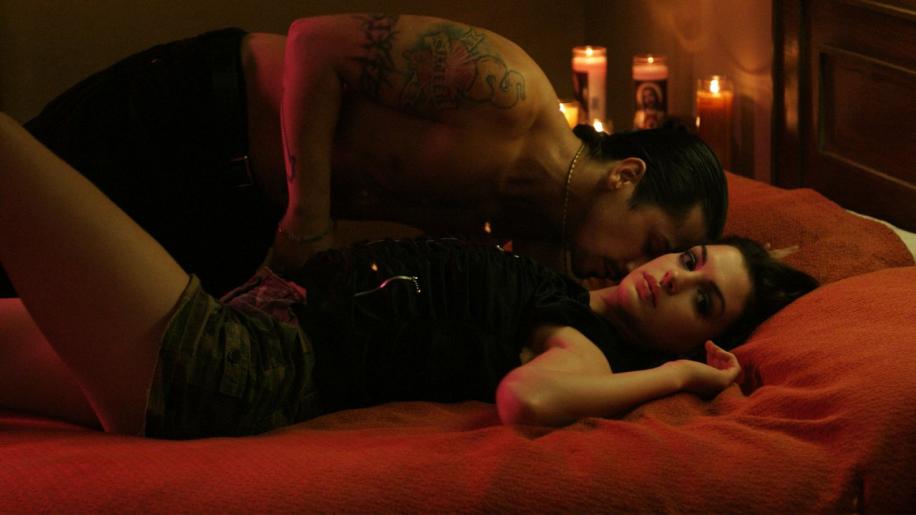 Obviously a low-budget affair, New Line to treat this with a lot of loving care, but there are some horrible faults. The first one, which made me wary was the opening credits where they have a halo and show some artifacting on the edges. At this point I was worried as to how the transfer was going to be. The second problem with the transfer is the print used which has noticeable dust specks over it, which arguably makes it a little grittier but ultimately for the age of the movie, it's unforgivable. The third and final criticism is the image is a little grainy, which again shows its low budget/indie roots. However, outside of these criticisms, it's perfectly watchable, with colours being accurate and black levels being deep and dark, maintaining a decent level of detail throughout. Skin tones are nicely handled and the detail is good (for example, you can see the hairs on Hathaway's arms when she gets into bed). Not a bad transfer, but there are a lot better out there. Containing both DTS and Dolby soundtracks, which seems to be increasingly the case with New Line, it is fine but again unexceptional. Ignoring the volume difference between the DTS and Dolby mixes which in this case is very slight, the only difference is the depth of bass which is deeper on the DTS version. Of course, this is irrelevant if you hate rap/hip hop (which I do with a passion), because there's only so much of it from the music you can stomach, which meant I choose the Dolby mix from that perspective. Although it is a surround mix, the movie is primarily front heavy with the rears only being ambient, with street sounds and cars passing by. It's a tad disappointing as there could have been a little more “oomph” in the rears and it would have a more engrossing experience, but sadly that's not the case here at all and is therefore, average. Some trailers, but that's your lot. With such unlikable characters, you'd think this would be hard to watch, but it's not really too bad. Viewed as a character based drama, it works - just, but that's primarily due to the execution of the main character, Alison. Without the insight into her character, this would be yet another Gangsta movie, but this does elevate it somewhat.