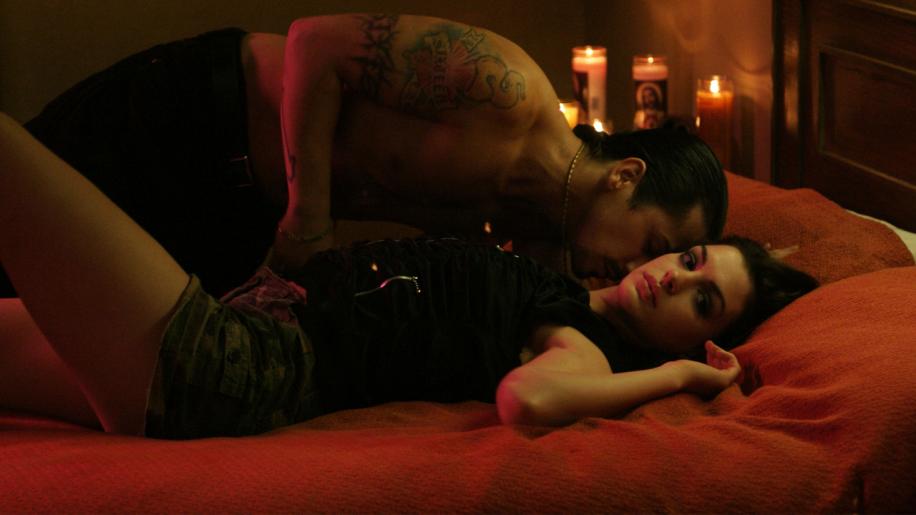 Anne Hathaway shows her breasts. There, got that out the way so those who needed that answered can stop reading and go grab a copy. Those who actually want to know about the movie, read on.

Hathaway plays Alison, a poor little rich girl with plenty of poor little rich teenage friends, who want to be Gangsta, or Wiggas as they are apparently dubbed. They wear their colours proud, look like every teenager at Lakeside and say "Dawg" a lot, so much so I was looking for an interpreter. Anyhow, these wannabe's talk the talk, have sex with their "bitches", smoke dope and then, return to their rich little world when they stop playing. We watch them at the beginning start a fist fight with a Latino gang for no reason whatsoever, while all the time it's being recorded by a friend who is obviously a media studies student. One night, our wannabe's travel to the east side where real Latino gangsters live. After a drug purchase goes wrong, Alison shifts her attention to the dealer, a Latino called Hector, who excites her life as he's the real deal, but his life is much more dangerous than her boyfriend Toby (Such a Gangsta name eh?) and the film charts how far Alison and her friend Emily wish to descend into this lifestyle, all the time being documented by our student filmmaker.

Well it's an interesting movie, which only underlined to me how dumb gang culture is. I already knew this, it just re-enforced my view. None of the characters are likable - sure Hathaway and Phillips are attractive, but the characters are so shallow and dense, one can't help but think that by the end of the movie, that the consequences of their actions is truly deserved. Will it be viewed as a cautionary tale? Unlikely, even though it doesn't glamorise the culture, I can't see teenagers thinking how ridiculous this mentality of gang culture is, simply because they generally aren't wired that way. There's also a nice subtext between Alison and Emily that implies a lesbian/bi-sexual relationship, which is spoilt later in the movie with a blatant, heavy-handed scene which ensures if you missed it initially, you'd get it here. Not clever at all, implied worked so much better.

Hathaway, for once, flexes her thespian skills and while she has some way to go, this was a brave choice compared to The Princess Diaries. She acts from Gangsta to seductress here, but is most believable at the end when she's just Alison being Alison. She'd be wise to try more diverse roles like this than the kiddie comedies she's known for. I didn't initially recognise Gordon-Levitt from 3rd Rock as the Jamiroquai stoner who is Toby's right hand man, so one can say he plays against type here, nor did I recognise Shiri Appleby from Roswell, although it's been a few years since I saw Season 1. He's not particularly used for much outside of comic relief, being a stoner, but good to see another recognisable face and she is sadly a really minor character - maybe this was “contractual obligations” for both of them. Even Laura San Giacomo appears - man, has she aged badly here. But at the end of the day, everyone is fine although it's still weird seeing a lot of Vanilla Ice wannabe's

As I said, it's an interesting enough movie, but it's not one where you'll come away with a fuzzy feeling, but one where depending on what side of the fence you sit, you'll either think it's realistic or that kids are really that naïve. I'm definitely being nice when I say naïve as well.