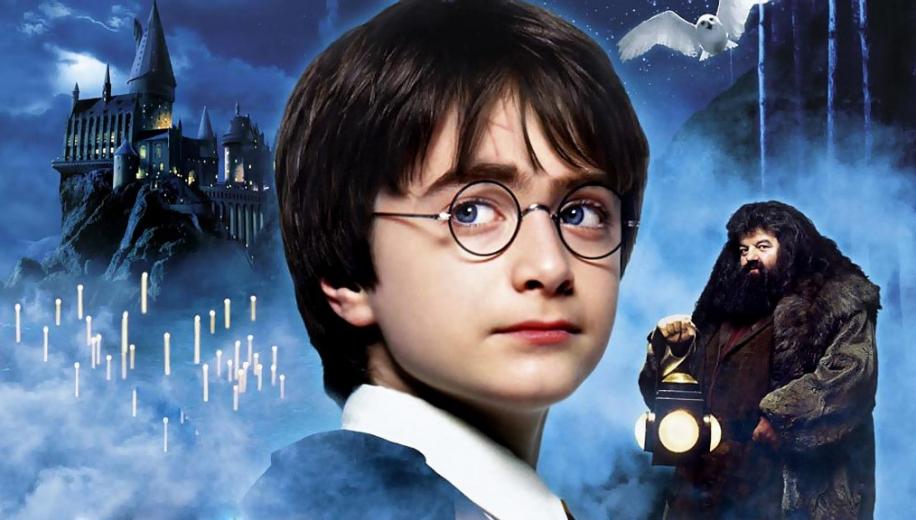 You're a wizard, Harry!

Just like the first book, this first film had a lot riding on it because the future potential was huge. As such there were very few, if any risks taken. Rowling was brought in to consult and the director chosen was ‘safe’ and ‘family friendly’: Chris Columbus. The story sees 11 year old Harry, who has been living with his brutish Uncle and Aunt and their equally brutish son, visited by a half giant called Hagrid, who informs him that he is a wizard and hands him an invitation to Hogwarts School of Witchcraft and Wizardry. He also informs him that his parents were killed by a very powerful dark wizard called Lord Voldemort, and that it was he who was responsible for the lightning scar on Harry's forehead. Whilst on the train to school Harry meets the two people that will become his lifelong friends, Ron Weasley and Hermione Granger and together these three discover exactly what is hidden within the walls at Hogwarts and use the meagre skills they have developed over the first year at Wizard school to prevent it from being used by a hardly human Voldemort. Broadly the film covers the major points of the book, however, it does come off rather like a whole lot of set pieces strung together with a weaker narrative.
Initially I put this down to the film missing a large portion of the source material, which, of course, it does, but actually that’s not the problem. The book itself, being the first and least mature, reads much like a ‘kids’ book - lots of exciting pieces strung together with a loose narrative. Yet the film does work; there is a reasonably exciting dynamic between the principle cast of Daniel Radcliffe, Rupert Grint and Emma Watson; and crucially they depict their literary counterparts well. In fact that can be said about any of the assembled cast, with particular merit for Richard Harris as Albus Dumbledore who adds an austere aloof and majesty to this most beloved of characters. The editing of the book does not go unnoticed however, large sections are removed, most are, to be honest, superfluous to the narrative, one part though, the third lock to the Philosopher’s Stone in which Hermione used logic not magic is missing but curiously she is awarded the extra house points... Ultimately, this first film fails to really ignite or excite, it plays out like family entertainment, it is the ‘safe bet’ that executives wanted and crucially it managed the success required for the commissioning of the second film. Harry Potter and the Philosopher’s Stone was shot using Panavision Panaflex cameras on 35mm film and has been scanned, cleaned up and finished as a 4K Digital Intermediate by Warner Brothers for this release. It is this 4K DI that has been used here for this Ultra HD Blu-ray. The film is presented with a 3840 x 2160p resolution and in a widescreen 2.35:1 aspect ratio, the disc uses 10-bit video depth, a Wider Colour Gamut (WCG) and High Dynamic Range (HDR), and is encoded using the HEVC (H.265) codec for HRD10.


HDR and WCG really show the benefit of UHD

What is immediately apparent is quite how tired the old 1080p Blu-ray image has become when compared to this new scan. There isn’t quite the leap up in detail you might expect, but it is clear to see; skin texture, the ornate robing of the wizards, the freshers' feast – all show tight decent edges. Indeed it is with wider establishing shots – those looking along Diagon Ally or overlooking the students in the Great Hall for example – where the best improvements are seen. However, it is with the clean-up, HDR and WCG that the benefit of the UHD really shows. Clothing has far richer colouring, the greens of the Quidditch pitch are far more lush while the oranges of the fire lit halls are far deeper. Perhaps the best scene to showcase the picture is the full size Wizard chess match; check out the gold inlay of the chess pieces, or the intricate detail in their carvings. So too is the dark in these Hogwarts Dungeons, far more depth added to the frame – of course it cannot show what is not there, so there are still some instances of crush; likewise some of the higher end suffers from clipping (mainly in flames). Also the increased picture resolution shows up some of the inconsistences of the CGI, particularly the quidditch match, but all these are minor quibbles, since that’s always been true.

The source is pristine, while retaining a decent grain structure. I did spot a bit of banding in the opening scene on Hagrid’s bike light, but other than that there were no digital issues. The English DTS:X surround track is a triumph, making full use of the extra speakers to give a fully immersive experience. There are plenty effects opportunities for the overhead layer to really add to the track; when the letters come pouring through the Dursley’s house, the quidditch match, the destruction during the chess match and the flying keys – all are incredibly immersive. Bass is deep and strong and really holds the track in check, some tremendous LF effects are present. Dialogue is always clean and precise, mainly front and centre but given the occasional bout of directionality. The score is well layered into the mix and, again, makes full use of all the available speakers. The old TrueHD and DYS-HD MA tracks are great, this DTX:X track easily tops them both. Harry Potter and the Philosopher’s Stone is part of an eight disc set released by Warner containing all films in 4K.

The disc itself, courtesy of a new 4K scan and clean-up, is presented as native 4K and looks superior to the dated Blu-ray: detail, colouring and black levels are all improved. The DTS:X surround track is quite excellent, with plenty of opportunity to showcase the immersive surround experience. Indeed this is the best way to see and hear the film. The only fly – no extras at all, no Blu-ray, nothing.