Harry Potter and the Goblet of Fire Movie Review 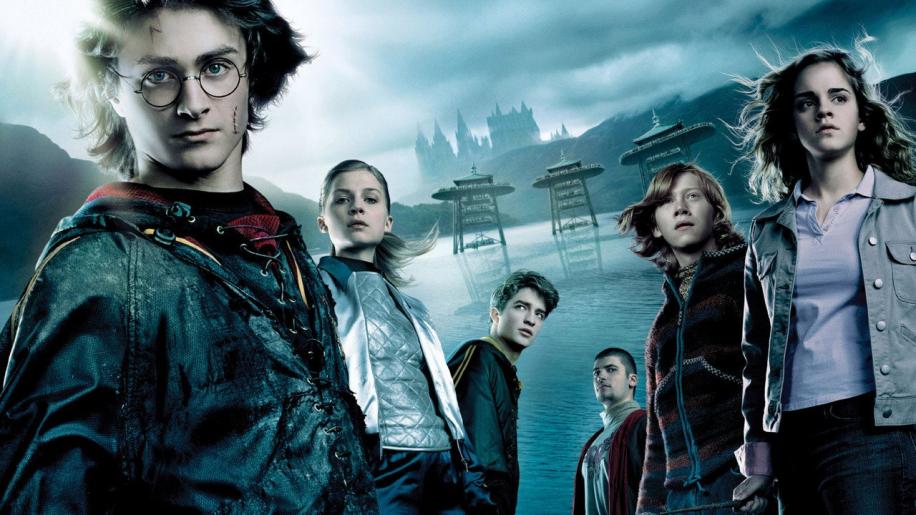 Harry Potter and the Goblet of Fire Movie (2005)

Harry Potter. Can't seem to visit a WH Smiths without seeing something about this apparent phenomenon, be it pre-order a book, or as it was when I write this, pre-order this DVD. Anyway, before I digress too much, I should elaborate on the storyline to this story, without elaborating on the previous 3.

It's the 4th year at Hogwarts and Harry is having some nightmares, well, one nightmare continually revolving around Lord Voldemort. Things get a little sticky after an attack by the Death Eaters after the Quidditch World Cup, which is the first sign that something is going awry and that Voldemort may be returning and a lot quicker than previously thought. Anyway, this year is the year of the Tri-Wizard Tournament, where 3 competing schools each have a student taking part in 3 challenges in an attempt to win the tournament and the trophy. To choose which students are to take part, a student has to write their name on parchment and drop it into the Goblet of Fire, which will then eventually decide who will take part. However a rule is introduced that forbids anyone under the age of 17 from entering, which is obviously made to prevent Potter from putting his name forward after the previous events. Well, the Goblet chooses 3 individuals, as it should, however it also chooses a fourth in Potter, which is kind of obvious otherwise the story couldn't really go anywhere. The 3 challenges that await our 4 assembled students will test them to their limit, not to mention that they are highly dangerous and it is entirely possible that they could be quite fatal. If this isn't enough trauma for our bespectacled hero, he also has to contend with something far scarier - The Yuletide Ball! Can Potter survive the 3 challenges, the appearance of Voldemort's Death Eaters and find a date for the Ball?

Ok a short-ish synopsis, but if I told you the challenges in any form of detail, would you really need to watch the movie? So, anyway what's it like? Well, it's pretty much like the other 2 that I've seen, being quite long with set pieces and a need for a general whodunit underlying theme, in this instance, how did Potter's name get into the Goblet and why. I suppose at this point in the review, I'd best put my cards on the table and say that I don't get why the books or indeed the movies are so popular. Adults around the world reading children's stories and raving about them, movies that do incredibly well at the box office but are really, quite mediocre at best (although, when you consider the viewing figures for Coronation Street and Eastenders, I suppose it makes complete sense really). I didn't watch the first one at all and still haven't - I had zero interest in it. The second one, I was dragged to by a lady friend - again, I really didn't want to be there and it was all rather by-the-numbers. The third movie I honestly can't remember why I saw it, but I'm sure it was against my wishes and this one I didn't venture to the cinema for. In fact the scenario for these movies is similar to the Lord of the Rings movies, missing the first one but being dragged by a female to see the other 2 - I had to buy and watch the first one on DVD so that I could at least have a clue as to what was going on. So, why am I telling you all this? Well, to be honest with you literally. No point in saying I'm a fan when I'm not, or that I was unbiased watching it. Truth is, I don't really care for the Potter phenomenon at all - it's certainly no literary masterpiece and no matter how you dress it up, they are still kids movies. Can't be any more honest that that.

But I will say that this one I didn't mind too much and there's a reason for it. Much was said about how dark the second one was, then the third one was darker and from what I'd read, this was darker still. No, I wouldn't call it a dark movie, but the reason it was more interesting to me was simply the last 20 minutes or so. I liked the fact that this was a kids movie that didn't end on a high note, oh no, the ending for this is pretty grim. In fact, there's a parallel here to The Empire Strikes Back. Both are at the half way mark, both have a resolution and both have revelatory endings that are far from happy - Luke finding out about his bloodline and having his hand chopped off and here when Harry................you'll find out.

I'm still not sure about the lead actors here, they still seem a little green and sadly, when you think of child actors, you tend to think of Dakota Fanning, who is usually quite exceptional, but on the other side, she's an exception and not a rule. If you did compare, then it really is, as the cliché goes, chalk and cheese. It's nice to see a lot of familiar faces, from the regulars such as Robbie Coltrane, Alan Rickman, Michael Gambon and Maggie Smith to the newer characters portrayed by Gary Oldman, Roger Lloyd-Pack (Trigger from Only Fools), David Tennant and Ralph Fiennes. With Mike Newell directing, whose screen credits are a somewhat mixed bag from the evil that is Four Weddings and a Funeral to Donnie Brasco (My favourite gangster movie), the tone of the movie seems to work here, where it's not all wonderful and we're slowly seeing a slightly grimness to the proceedings, but it still strikes me as overly long and a tad drawn out. For example, I'm really not sure what the point behind the Yuletide ball is, other than as a set piece, it didn't really further the plot any further and the tension between our intrepid heroes was already established earlier. But all that pales into insignificants to the final 20 minutes or so. I can't say, or shouldn't say too much, but not only does it have the same impact ala the aforementioned Empire Strikes Back, there's a psychological layer to it that kids may not get, verging on kidnapping and child abuse if you removed the magic and mystery elements of the Potter world. Anyway I digress.

So, keeping in mind my almost pathological hatred of the Potter phenomenon, is this any good? Well, it's the best one out of the 3 I've seen, it's still light and fluffy for the first 110 minutes or so, until the Maze challenge which is far darker than the other challenges, with a more psychological edge to the proceedings. However, it's still not quite a movie I'd go out and watch because it's still firmly rooted in children's cinema, but with the ending to this, I'm almost tempted and intrigued enough to be looking forward to the fifth, provided it can deliver on its promise here. Although with Jarvis Cocker performing in front of screaming children, there is a certain irony, regarding his history with Michael Jackson, that brought a wry smile to my lips.