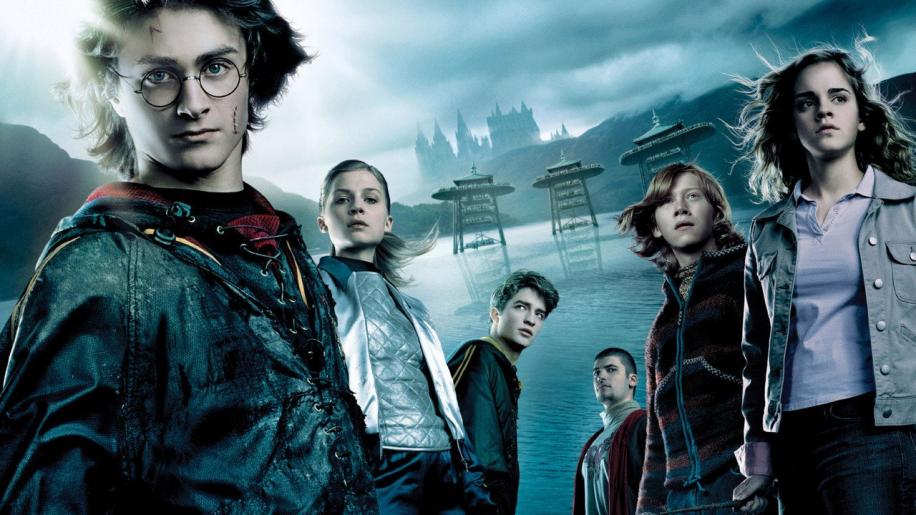 With a theatrically correct 2.40:1 anamorphic transfer, this is a superb transfer, which is as it should be for a very new movie. With colours being bold, with some vivid colours where needed, such as bolts from wands and black levels being dark, for example the maze sequence where it is ominously dark, the transfer holds up well. With the entire first disc containing solely the movie, it is no surprise that there are no signs of compression or artifacting present during the proceedings. I also can't say that I noticed any haloing or colour bleed, nor was any edge enhancement noticeable on my LCD. A superb transfer.

With a Dolby Digital 5.1 soundtrack, this is quite a solid affair, but it's not a reference disk. With a nice clarity of dialogue from the centre channel, one never misses what is said at all during the movie. LFE is frequent, from the rumble made when Voldemort casts the death curse spell in Potter's dream, to the roar of dragons, this is certainly a more bass driven movie than a few I've seen recently. Rears are used nicely for ambience, but there's also a lot more going on there too, again, from the dragon's flight sequence to the maze moving around behind you as well as in front, it utilises the speakers exceptionally well. However, while it is reasonably immersive, at no point during it did I think that it was exceptional or one of the best soundtracks I've heard. It is a solid soundtrack though and there is much to enjoy here.

Disk one has no extras whatsoever, not a trailer, nor a commentary track. Disk two starts off with two trailers, one for “The Ant Bully” and the other for “Happy Feet”. It then gives you the language choice and presents you with a menu split into 4 sections.

Dragon ArenaStarting off with Triwizard Tournament: Dragon Challenge which is an interactive game, where you have to avoid the dragon and collect the egg ala the movie. Not my cup of tea.

Then we have Harry vs. the Horntail: The First Task which runs for 6:07 minutes and focuses on the design of the dragon, the effects and the sequence as a whole. It tells you plenty about the actual sequence and I have to be honest, they seemed to think that the CGI dragon was imbued with character and so forth. Erm, no. It's a CGI dragon and that's all it is, sorry. Some nice behind the scenes shots, but other than that, neither in depth for any of the subjects it touches nor is it particularly revelatory.

Meet the Champions is a 13:03 featurette which, uncannily, introduces us to the three actors who make up the Triwizard cup challengers. It's very much a video diary type affair and while fans will love it, I found it a tad tiresome.

First up, we have Triwizard Tournament:Lake Challenge which is another interactive game. It follows the plot to the movie, so I won't bore you with the details and again, young kids are the only ones likely to enjoy this.

In Too Deep: The Second Task runs for 9:48 minutes and is again a behind the scenes look at the Lake challenge. Slightly more informative over the process than the first one, this is quite interesting although never completely in-depth compared to other DVD featurettes, this will inform to a point but you may wish there was more to bite into.The Maze

Triwizard Torunament:Maze Challenge is yet another interactive game and as before, won't really appeal to gamers, more for young kids.

To The Graveyard and Back Challenge is another interactive game where you shoot the death eaters. Seriously at this point I was wondering why anyone with a console would play these.

The Maze: The Third Task is a 6:48 minute featurette which, yet again, elaborates on the process of filming the maze sequence and yet again suffers from being not quite as informative as other disks. It touches on sequences and shows before and after, for example, but never the in-between process. Shame, but I suppose with the attention span of youth, it really isn't a surprise.

He Who Must Not Be Named is an 11:08 minute featurette revolving around Lord Voldemort, because up until now, he's been behind the scenes, pulling strings and orchestrating the challenges Harry has faced. Until now. Now, he's back and to coin a phrase, business is picking up. This featurette discusses the graveyard scene, Fiennes part in the proceedings and the CGI work utilised to construct the effects, such as Voldemort's face. It's definitely the best featurette on the disc, in my opinion.

Starting off with Additional Scenes, which is 10:07 minutes of deleted scenes. You can't choose these individually, rather having to view them all at once, but they are presented anamorphically, although without a Dolby Digital soundtrack. They don't add anything really to the movie, but I should be grateful that it didn't make the movie longer.

Preparing For The Yule Ball which runs for 9:03 minutes. If you hadn't guessed from my opinion above, this was a very pointless sequence in my mind, so this is a featurette which showcases this tedious scene. Ugh. For those who liked it, you'll enjoy it, for me I want the 9 minutes back.

Conversations with the Cast is a 30:32 featurette and, as the name suggests, is a chat hosted with Richard Curtis with the three heroes, as in Potter and his sidekicks Ron and Hermoine. This side of things lasts 21 minutes, the following 9 minutes is where 5 competition winners can ask the 3 stars a question each. You can guess the calibre of conversation somewhat drops here.

Reflections on the Fourth Film lasts for 14:12 minutes and is another video diary-esque featurette where various members of the cast talk about the events on set of the fourth movie, complete with behind the scenes footage. While it may be fun for them, I found it very tiresome, very quickly and again this is probably best suited for kids rather than adults to watch.

Finally, we have the theatrical trailer, which lasts for 1:17. There is some DVD-Rom content as well, which is a demo of the PC game of the film as well as a Hogwarts Timeline.

I can't stress that I find this Harry Potter phenomenon overblown out of all proportion. From what I can gather the books are certainly no literary masterpieces, but at the same time they seem to have captured a lot of peoples imaginations. While I didn't like the first 2 movies, and for the most part I found this not to dissimilar, with the somewhat downbeat ending and revelations, the next chapter could actually be interesting.