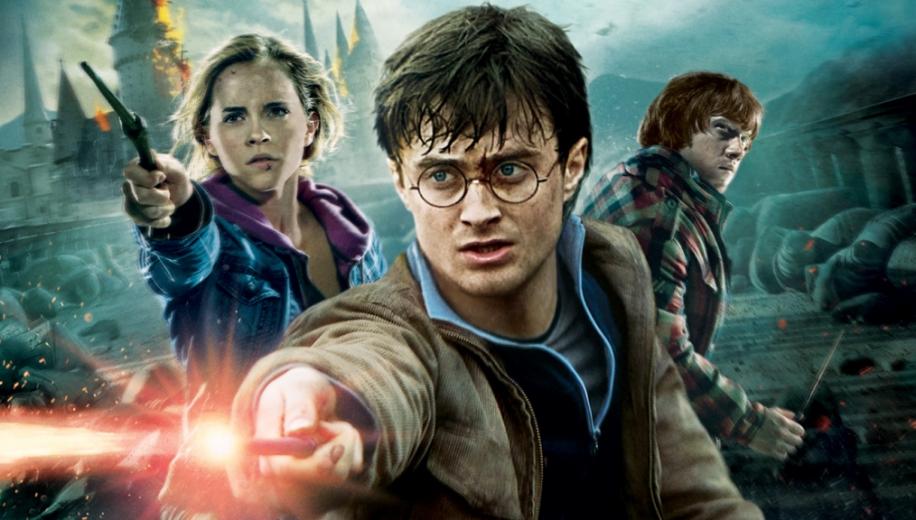 It is the quality of ones convictions that determines success, not the number of followers

Thunder cracks, Dumbledore’s sarcophagus splits apart, Voldamort takes the Elder wand and shoots the sky – so starts the final, final chapter directly from the conclusion of Part 1. Yates wastes no time in diving into the action; after a brief interrogation of Griphook about the contents of Bellatrix Lestrange’s vault at Gringotts, our intrepid trio are convinced that a horcrux is hidden within and hatch a plan to steal the item. A quick swig of polyjuice potion sees Hermione transformed into Bellatrix Lestrange. Things don’t quite go according to plan, whilst the three do manage to obtain the horcrux they have to improvise an escape by on a dragon. Once completed it’s off to Hogwarts to destroy the remaining horcruxs, though things are nearly halted before they start because when Death Eaters appear; it is only a timely intervention by Aberforth (Dumbledore’s brother) that saves them. We are quickly drawn back into battle as the Dark Lord descends for the final confrontation. There are some magnificent scenes that follow; Harry’s confrontation with Snape, the subsequent duel between Snape and McGonagall, McGonagall’s calling of the defence of Hogwarts by bringing the statues to life, the destruction of the protective barrier, the sheer bloodshed and spectacle of wizard against wizard and the battle between Harry and Voldemort.
Perhaps the best is reserved for Snape’s memories which reveal to Harry his true motivations for the past seven years in a scene both heart-warming and chilling, because to understand just what he has done; how he has suffered is a testament to Alan Rickman’s performance over the years: after this scene all of his motivation can be seen, right back to film one. The film is one long action piece with our intrepid heroes going from setpiece to setpiece. But the way Yates fillets the source the pace is kept high. As written this final chapter takes place over one day; the film tries the same – and for the most part it works, but where things do run thin, i.e. strained plot points or unanswered questions, a minute more here or there could have helped. Criticism could be levelled at the whole Deathly Hallows and their significance and the ‘love as a shield’ plot that enabled Harry’s survival in the first place, and was put in place after his sacrifice, was never even mentioned! These changes notwithstanding Yates has managed to once again make a fine film that captures the essence of the book and maintains enough to make it seem like there is very little missing. Indeed this film elevates Part 1 and as such both should be watched back to back, or at the very least on consecutive nights, as together they work far, far better than they do apart. Harry Potter and the Deathly Hallows Part 2 was shot using Arricam LT, ST and Panavision cameras on 35mm film, and originally finished as a 2K DI, which has been used by Warner Brothers for this Ultra HD Blu-ray release. The film is presented with an up-scaled to 3840 x 2160p resolution and in a widescreen 2.40:1 aspect ratio, the disc uses 10-bit video depth, a Wider Colour Gamut (WCG) and High Dynamic Range (HDR), and is encoded using the HEVC (H.265) codec for HRD10.

Much like Part 1, this UHD image hasn’t had the aggressive colour shift and darkening that previous discs in the set have had, it is much more in tone with the Blu-ray in this regard, only with an up-turn in resolution, colour and black depth. Detail itself is terrific, check out the opening scene, Dobby’s grave, the wind swept beach and John Hurt’s wrinkled face – all show a clear and definite detail up-grade. This is true for most scenes where edges are distinct: Bellatrix’s vault and the Room of Requirement, for example, but landscape shots fair just as well, the gathering armies, Voldemort’s followers on the hill crest overlooking Hogwarts are just some of the good examples. WGC and HDR really push this image as well; colours have more depth, skin tones are more robust – check out how gorgeous and hot fire looks. Black levels are wonderful; there is a new sense of depth to the frame with some strong shadow detail contained within when required. But it is with the white end where things really take leap – check out the Hogwarts protection barrier, or when it comes crashing down. The depth given to the background when Harry and Dumbledore meet and the vividness of the red against it, or the flashes of spells that pierce the gloom. And when Harry and Voldemort’s wands clash for the final time; a real picture!

The source is clean and maintains a good grain structure, excepting one scene – looking over Harry’s shoulder at the window when in the Bill and Fleur’s house on the beach – there is a bit of crawling going on. Digitally there are no issues to contend with. The English DTS:X surround track has to be the best of the bunch; effects are stunningly placed in 3D space to place you in the centre of the action. Of course the big action set pieces show case the major elements: the attack on Hogwarts, the burning of the Room of Requirement, the dragon escape from Gringotts. But there are more subtle effects, the wind swept beach in the beginning, travelling to Bellatrix’s vault or the Domino Charm once there. The overhead channels are working overtime! Dialogue is clear and precise and sounds very natural throughout; never gets lost in the mix and is given a bit of directionality when required. Alexandre Desplat’s quite astonishing score for this film makes liberal use of heavy brass, drums and strings while high choral notes advance the melody - it pitches the music at the right level to engross the battle scenes with filmic splendour that is both recognisable and unique, rousing and melancholic and is awesomely layered into the mix and makes full use of all the available speakers. Bass, itself, is deep, tight and well controlled giving significant impact the score and effects. A brilliant, brilliant mix. There are no extras on the UHD disc, and this 8 disc set does not contain any Blu-rays with extra features – a somewhat peculiar commercial decision by Warner. So if extras are your thing, you’ll have to hold on to your old Blu-rays. Harry Potter and the Deathly Hallows Part 2 is part of an eight disc set released by Warner containing all films in 4K.

The UHD courtesy of a 2K up-scale does improve on the Blu-ray, it also follows Part 1’s upgrade in that there has been little alteration to the colour pallet or darkening compared to the previous discs. Detail, this time around, has taken a shot in the arm, with a nice resolution increase, though it is with the WCG and HDR where the real improvements are; black level is deeper and (desaturated) colours are enhanced. The DTS:X surround track is another triumph, with bass and effects to really envelop and enthral, perhaps the best of the lot. The only fly – no extras at all, no Blu-ray, nothing.

And that brings to a close the UHD 8 film Box-set release. In re-watching these films I was struck at how well made they were, how captivating and how well constructed. There is a decent flow between them all, making them part of the whole, and they work much better when viewed consecutively, particularly the final 3. Harry Potter, a seemingly unstoppable franchise. This release is a curious gem; the films have all been given a make-over, some work better than others, but to not include any extras is an odd commercial decision. It is, however, the best way to enjoy these films in all their glory.