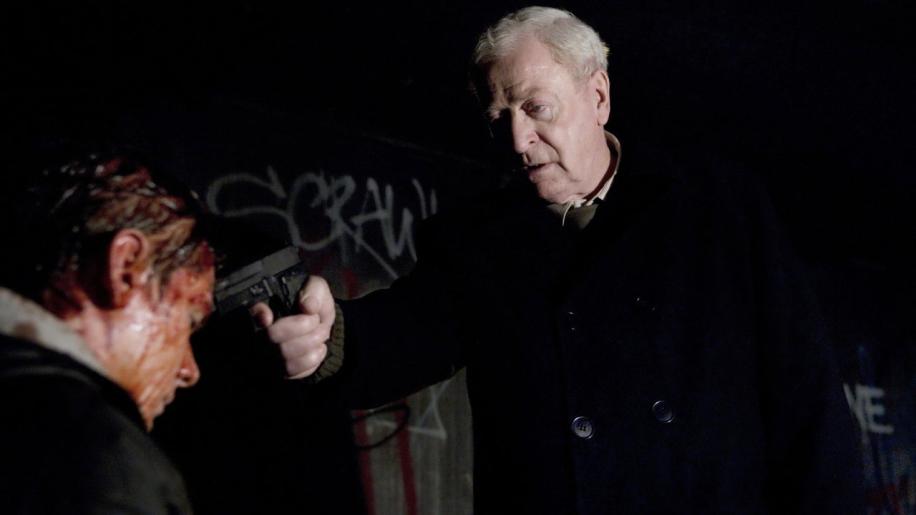 Michael Caine has had a long and interesting film history. In his youth, he starred in such diverse classics as Get Carter, The Man Who Would Be King, Sleuth and The Ipcress File. He was capable of playing gangster, soldier, romeo, or a sombre antidote to Bond's superspy. He could stand his own against Lawrence Olivier and share the screen with Sean Connery, bringing his cockney charm and old-fashioned grit to bear in most everything he was involved in. As his career went on, however, his characters did not appear to evolve, and the Eighties and Nineties saw him attempting to play the same characters as he had when he was much younger, but to an audience that just did not want that anymore. The films were of a lesser quality, and the man - however understandably - took far too many paycheque productions, leaving him out cold in Hollywood bankability terms. And then, all of a sudden, in the twilight era of his career, he finally started taking on older, more mature roles. It was around the time of his Knighthood where we started to get good films from him again. And then, when he offered up a pitch-perfect portrayal of one of the most famous fictional butlers in the world, Batman's Alfred, in arguably the defining superhero 'reboot', Nolan's Batman Begins, Caine was suddenly back in Tinseltown's limelight. Similarly superb supporting roles in the likes of Children of Men and Nolan's The Prestige and The Dark Knight (and he's in the eagerly anticipated Inception too) cemented his position, and he finally returned to leading roles in a couple of Brit indie flicks, both of which acknowledge, and respected, his ageing star status.
Michael Caine...is...Harry Brown
Harry Brown lives on a Council Estate in The Elephant & Castle. An ex-Marine and pensioner with a wife in the hospital with cancer and a teenage daughter long buried, he makes his daily trips to see his dying wife having to avoid a local underpass, which is plagued by gangs of young criminals, and take a far longer route. Despite witnessing numerous instances of violence from these youths, it is only after this gang affects him more personally that he finally begins to crack and decides that, with the police unwilling to help, he is going to have to take matters into his own hands.

Harry Brown is a sombre, moody and atmospheric little crime drama that takes themes and concepts from all those obvious revenge thrillers - like the Dirty Harry and Death Wish movies - and infuses them into a low-key affair set in the kind of bleak, gang-dominated environment depicted in the relentlessly depressing Brit horror Eden Lake. Many will likely compare this film to Clint Eastwood's tour-de-force acting swan-song Gran Torino, and the parallels are obvious. But with Caine's unusual character, and characterisation, as well as the tremendously authentic South London Estate setting, Harry Brown is a very different animal to its US counterpart.

Perhaps non-UK residents will not fully absorb the social commentary on offer here, but for us Brits, this is quite a relevant little movie. For quite a while now the 'age of the hoodie' has been upon us, where gangs of youths, with nothing better to do with their lives, cause trouble for the general public. They spend their time loitering around in groups, either by the local shops, or in the local parks or even just around the council estates that they have, more often than not, emanated from, and basically - for no reason other than their own puerile entertainment - shout abuse, intimidate and generally harass anybody they come across. Although normally involved in some low-level crime, they often go under the Police radar because they are too difficult a target to get a decent conviction on. Police stats and budgetary restrictions make it harder to go after these kinds of mobs when, more often than not, it would be difficult to identify which one of them actually committed a specific crime. It's normally motive-less, pointless crime too, perpetrated by a whole bunch of them. Vandalism, theft, and various degrees of assault are all crimes that go largely unsolved when it comes to youth trouble. And that's before you even take into consideration drug-related incidents, or crimes involving weapons - from knives to guns.

It's like a disease, and it leaves the average law-abiding member of joe public feeling quite helpless and threatened, when they should actually be free to go about their business without this kind of trouble. I don't really blame the police - after all they are only what society has moulded them into being, and if we wanted them to crack down harder on crime then we wouldn't have castrated them with endless rules and regulations that, seemingly, only go to make it harder for them to do their job. No, the blame really lies with parents. And this can be linked to the fact that we live in a society where the average graduate couple will probably have children in their mid-thirties (if ever), having established themselves to enough of an extent to provide for their family, and the average teenage school-leaver couple (if they even stay together) will probably struggle, end up sucking at the teat of the benefits system, and perpetuate the cycle of irresponsibility and immaturity on their own offspring. We end up with at least twice as many children from impoverished families than from financially stable families, and the cycle repeats, growing exponentially at every turn. Of course I'm generalising, certainly there are couples on estates who bring up their children with far greater morals and decency than some spoilt brats at Eton, but, on the whole, you don't encounter hoodie violence walking through Richmond Park at dusk, you find it on the council estates in the poorer areas (south and east of London and across the country). And somebody should really do something about it. New Yorkers would probably advocate a similar regime to the zero-tolerance policy that was instituted in what is now one of the safest cities in America. Hell, New Yorkers would probably be shocked by this depiction of what life really is like in some parts of London, having grown up picturing London through happy Brit flicks like Notting Hill.

I digress. Harry Brown is a fairly standard revenge flick made very unusual by the above-detailed setting. And made yet more unusual by one Sir Michael Caine. Some of my favourite roles for the guy have been where he has played characters with the name Harry: his Harry Palmer films (including the classic Ipcress File, and the vastly underrated Funeral in Berlin) and Blue Ice, a lesser-known crime flick where he plays an ex-spy named Harry Anders, and now Harry Brown. Many might be confused by the poster art for this film, playing too much on Caine's Get Carter role. Harry Brown is nothing like Jack Carter, he is arguably unlike any other character played by the man (although his post-Knighthood performances in Brit indie flicks like Shiner and Last Orders certainly paved the way for this). And it's a part which allows him to truly shine, the director allowing plenty of observation of tiny little looks and nods here and there, which really enrich the charming vigilante pensioner. Caine has perfected his ageing performances, putting intelligence, despair, drunkenness, determination and rage all into the mix to create a defining lead role in the twilight era of his career. Unlike Eastwood's contemporary in Gran Torino, Caine's Harry Brown has the added dimension of being submissive during the first half of the movie, the events that take place slowly chipping away at his resolve to just 'mind his own business' before he evolves into a very determined killer.

Although this is definitely Caine's baby, there's a solid and authentic supporting cast of actors to make the movie all the more engaging. They include Emily 'Shutter Island' Mortimer as the D.I. who suspects Harry Brown may be more than just a pensioner, Red Riding's Sean Harris as an unpredictable drug dealer, Resident Evil's Iain Glen as the Senior Police Officer in charge of that area and oblivious to what is really happening on the streets, Liam 'Clash of the Titans' Cunningham as the landlord in Harry's local, and David 'Harry Potter' Bradley as Harry's loyal chess-buddy. Then there's the youths involved, including a few familiar faces from the Brit teen drama Skins, and one Ben Drew aka rapper Plan B (who performs for the great track, End Credits, which... erm... also runs over the end credits of the film). If you don't know what Drew looks like (i.e. haven't seen his excellent performance in Adulthood), then it is a great surprise to find out that it's him in this movie because he really is very convincing. It's a tremendous performance, scarily immoral and bristling with unbridled energy, and he's perfectly cast as the loudest of the gang members.

This is Daniel Barber's debut film as a Director, and he has created a seminal revenge flick that will likely be hard to top by his next production. He gets everything just right in this movie, from the low camera angles that show off Caine's towering frame, to the slow shots of the Estate and the well-staged segments of violence. He gets the film-work just right to raise this above the level of the average revenge flick, and captures the right feel and atmosphere to make it feel unique. The cinematography is spot-on, bringing the less well-known parts of London to life, and the accompanying soundtrack is amazing, brimming with this brooding score 'theme' that haunts you throughout. The only minor quibble is the use of CG for the blood (and smoke) sections, which looks thoroughly over-the-top and does not suit the sombre, down-beat material. But its largely forgivable considering the limited budget that they were working with, and the wonderful job that they managed to do nonetheless.

Harry Brown is a powerful little film, arguably one of the best Brit indie flicks to have been made in recent times - especially amidst the plethora of sub-par Danny Dyer efforts - and it offers up a controversial social commentary on the youth crime committed in modern times (which is particularly poignant after the recent furore over the guy jailed for defending his home from intruders who tied up him and his family). Featuring a commanding lead performance by the great Michael Caine, this is arguably the defining role of the third act of his filmmaking career (I'm sure that 'You have failed to maintain your weapon, son.” will go down in history amidst his most popular quotes). A bleak unique setting, some thoroughly engaging and authentic supporting cast members, adept first-time directorship, stylish cinematographic and a haunting score round off one of the most recent sleeper hits (it eventually got picked up and marketed in the States, and is being released theatrically in a few weeks). And it really is a film that deserves all the praise that it has been getting. Highly recommended.