Just squint, risk a seizure and flip your speakers around if you want to enjoy this movie. Simples. 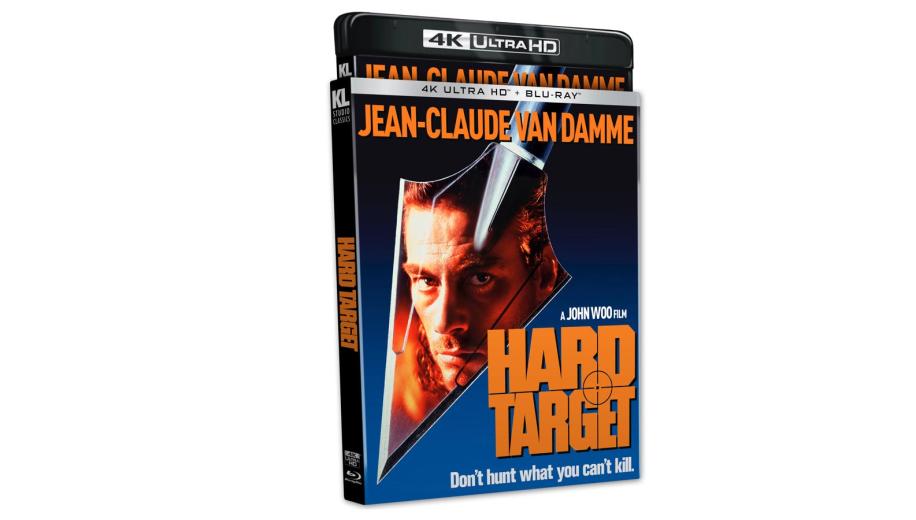 Almost thirty years on, and Hard Target remains a veritable action classic and one of the best movies of Jean-Claude Van Damme's career.

Back in 1993, however, it marked celebrated Hong Kong action maestro John Woo's troubled Hollywood debut. He'd just come off his tour de force Chow Yun-Fat actioner, Hard Boiled - arguably the best film in his career, and certainly one of the best action thrillers of all time - and found the transition to Hollywood difficult, not least because of the restrictions placed upon him, and the emphasis on front-end management by the production studios, but also because of the problems he encountered whilst working with a diva lead actor.

You see, in '93 it was Woo who was the outsider, with a post-Universal Soldier Van Damme being something of a golden boy. Running over schedule and losing an epic boat chase at the bequest of his lead actor (who preferred horses; the boat sequence would be saved for Woo's later Face/Off) the director turned in a first cut which was too long and violent for the studios - earning a dreaded NC-17 by the censors, back in the days when they refused to specify what exactly needed to be changed to secure a more studio-friendly R-rating. Several cuts later and we had a film with considerably less violence and also more of a focus on Van Damme, at the expense of the other actors: reportedly even Van Damme himself sat down with the editors to deliver an alternative cut, which trimmed away the development of the antagonists in the film in favour of more of himself, allegedly because "audiences were paying to see Van Damme, not Lance Henriksen".

To this day fans still yearn for a proper release of a bootleg workprint of one of Woo's earlier, longer cuts in favour of the least cut official version that is currently available (Kino themselves tried and failed to get it). What are you missing? Well, an ill-advised romantic scene with Van Damme's hero doesn't mean much but the longer scenes with the antagonist - talking about his previous hunting experiences against a violent montage backdrop of real-life animal hunting footage - are quite good, as is the added action, not just from a visceral point of view but also because it makes the film far more classically Woo in style. Still, the official international cut is a quality action film even with all the troubles behind the scenes, taking the classic story from The Most Dangerous Game and updating it to a contemporary setting.

Woo may not have made his best film here, but it was easily one of his best US outings, crafting a bona fide action classic

Although the dual language barrier made their working relationship even more strained than it already was - so much so that Woo opted out of any further projects with him - having Van Damme on board did come with a silver lining, as it meant that Woo could tailor the script to feature considerably more action than before, as well as a hefty chunk of expertly-choreographed martial arts, something that Woo's HK projects had only dabbled in. It certainly lent itself well to the auteur's distinctive balletic action style and, at the same time, probably made Van Damme look the coolest he'd ever looked (and, likely, ever will). 1992's Universal Soldier and 1994's Timecop might have been his biggest hitters at the Box Office but, sandwiched in-between, Hard Target is easily the best action film in his entire career.

Every decent film - action or otherwise - needs a decent villain, with Lance Henriksen fondly recalling his work with Woo on Hard Target as some of the best of his career; and it shows, offered a choice part to sink his teeth into (with The Mummy's Arnold Vosloo as perfect support) and committing 100% to the growling frustration he has not only with his target, but with his own men, and to the very physical stuntwork required of him (actually being set on fire).

Woo's trademarks are all present and correct: yes, slo-mo and freeze-frame, but also doves (well, pigeons), two-handed gunplay, back-to-back confrontations (where two characters trade words as they reload, separated only by a thin partition), and the lead character anticipating the actions of others through reflections in mirrored objects. This may not have been pure HK John Woo - indeed many, quite rightly, regard this as more of a Van Damme film than a Woo one - but there was still enough on offer for fans to revel in.

Woo may not have made his best film here, but it was easily one of his best US outings, and he inarguably worked wonders with the ingredients he had, making Van Damme into an eminently cool action icon and certainly delivering his best flick, whilst crafting a bona fide action classic in the process.

Hard Target was shot on 35mm film and has been gifted a new native 4K restoration pulled direct from the original camera negative. The 3840 x 2160p resolution image has a theatrical widescreen aspect ratio of 1.85:1 and uses 10-bit video depth, High Dynamic Range in both HDR10 and Dolby Vision flavours and is encoded using the HEVC (H.265) codec.

The detail they've pulled from the print is exceptional, giving the '93 flick a new lease of life

So, playing back Kino's Hard Target 4K disc in Dolby Vision is a disastrous affair, with painful flickering/strobing pervading the image to the point of making it utterly unwatchable. It's a shame really, because there are some impressive DV tones, particularly in brake lights and street lighting, popping like this film has never popped before, but it's simply unwatchable. And for those who have no option to force stop DV playback, this is where the story rather tragically ends, with the only light at the end of the tunnel being the hope that Kino - who are reissuing a fixed disc due to the audio problems to be later detailed below - also fix the DV issue.

For those who do have the ability to force stop DV, playback in HDR is suddenly perfectly... normal. And, perhaps even more frustratingly given what you'd have had to go through to get here, actually pretty frequently stunning. The detail they've pulled from the print is exceptional, giving the '93 flick a new lease of life, with close ups to die for, fabulous skin texturing and background nuances; hair, clothing, weaponry all looking so finely observed it's frequently jaw-dropping. If it weren't for the missteps with the DV application, this could easily be a contender for a 10/10 presentation, defying some barely noticeable print damage, the limitations of the budget, and the stylistic choices (clumsy fade-outs) and providing a warm, organic HDR application that seeps into the skin tones naturally, brings vibrance and pop to the flames and explosions like you wouldn't believe, and institutes impeccable black levels. In fact, barring the further audio issues, those without DV would have likely absolutely loved revisiting this action classic in 4K.

The kind of film ripe for a 3D object-oriented HD audio Dolby Atmos track, Kino unfortunately completely dropped the ball here as not only have they stuck to just 5.1, but they've screwed up the surround channels, seemingly reversing left to right. Possibly depending on setup and inclination, the audio snafu is infinitely more tolerable than the strobe effect of the DV layer, however the flip side to this is that there is a fix to the DV issue - at least for some - in that if you are able to watch it with the base HDR layer only (i.e. DV switched off) then the video is pretty-much flawless. There's no corresponding 'fix' to the audio, short of manually switching front speakers or something equally ludicrous. Your mileage may vary in terms of how debilitating the sound issue is, but it is undeniably noticeable, and not just in the action sequences where there's arguably so much going on that it is sometimes easier to forget the misplaced sounds. In fact, simple things like closing car doors can sound a bit off, as discrete noises which are just not in quite the right place within the soundscape, feel 'thrown' across the array.

... depending on setup and inclination, the audio snafu is infinitely more tolerable than the strobe effect of the DV layer

Kino have addressed this issue - although it seems have not yet discussed the DV issues - by way of a replacement program which will seemingly see replacement discs sent out by default, however time will tell, particularly for international customers who have imported the disc. The review will be updated in due course depending on whether a fixed replacement disc is forthcoming.

There's a great selection of newly-minted extras on this release, included on the accompanying Blu-ray release, with only the Audio Commentary ported over to the 4K disc proper.

... a great selection of newly-minted extras

The listed extras include:

Peak Van Damme and possibly even peak Hollywood Woo, Hard Target is a bona fide action classic, perfectly blending martial arts, action, style and scoring, chewy character performances and star turns and a fabulously chosen ensemble cast bolstered by tremendous hero and villain characters, all pitched against a cleverly simple premise which is used as a foundation for a blisteringly exciting succession of action setpieces.

... barring the audio issues, those without DV would have likely absolutely loved revisiting this action classic in 4K

Kino Lorber's 4K release of Hard Target was clearly heavily pre-ordered, with a possibly surprising number of people on both sides of the pond eagerly excited to revisit this 90s effort in 4KDV. Unfortunately, it's another release which is likely to put fans off preordering in the future as, unless the replacement scheme operates seamlessly, this could end up a frustratingly protracted and painful position particularly for international importers of the disc. In playback, the audio issues aren't fatally bad, and actually the flickering DV layer on the video may well prove to be the real death sentence to playback, certainly for those who haven't got the option to watch without. If you can watch it in HDR, and tolerate the odd moment of distinct aural displacement, it's actually a whole lot of fun revisiting this action classic, which has certainly been done justice by some tremendous native 4K remastering. But really, the final scores won't be in until they've fixed this mess and the dust has settled. 2021 has certainly not been a good year in the QA departments of the main boutique labels (c.f. Arrow's Donnie Darko 4K et al.)

Hard Target was released by Kino Lorber in the US in 2021, however it has been pulled from stock for a corrected re-release tentatively placed in February 2022.