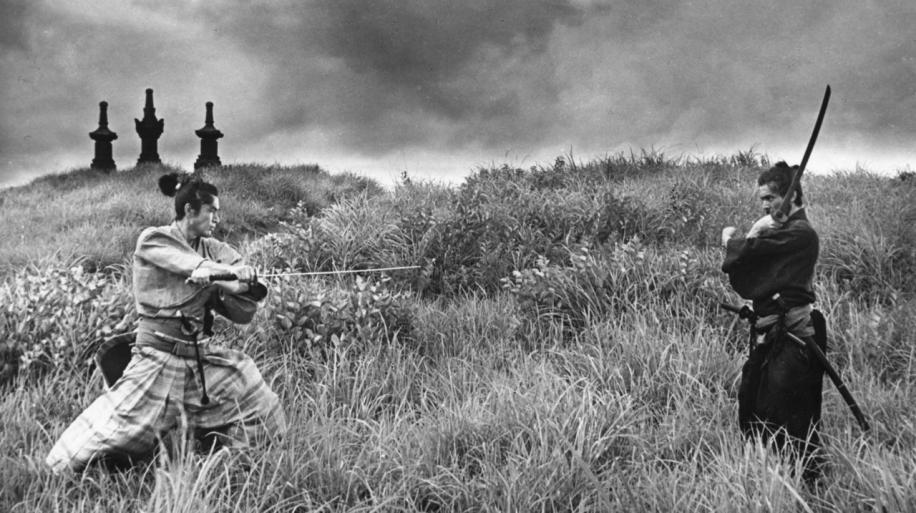 Cruel, damning downright brutal, of all the jidaigeki (essentially Japanese period films) of the 1960s, few can hold a candle to Masaki Kobayashi's Harakiri (based on the novel by Yosuhiko Takiguchi) in terms of sheer power of emotion, and it is little wonder that Takashi Miike chose to follow up his remake of 13 Assassins with his own take on Kobayashi's masterful dissection of the skewed values of a past era, but in this case, perhaps even Miike will find his propensity for nihilistic cruelty outdone by the original's weight of human despair. Tatsuya Nakadai stars as Hanshiro Tsugumo, once a retainer for the former Fukushima clan in Hiroshima whose house fell in 1619. Now he is merely another masterless samurai, down on his luck, the signs of his impoverished lifestyle evident for all to see; not just his tattered clothing and unshaven face but the bags under his eyes and a lackadaisical walk as if holding his demeanour has tired him beyond sanity. He arrives at the headquarters of the Iyi clan, he requests the use of their forecourt to commit hara-kiri (roughly translated as "belly cut" - a ritual suicide that requires the performer to disembowel themselves with a short blade or sword) and thus die a samurai's death with honour. Upon hearing his desire for such a gesture, the clan's senior counsellor, Kageyu Saito (Rentaro Mikuni – Kwaidan) agrees to meet with Hanshiro and relay the story of what happened to the last samurai to approach him making the same request.

What follows is a masterful example of a layered narrative, told partially through flashbacks and with each interval between the remembered segments heightening the tension as all the pieces start to fall into place. Key to everything is the supreme cinematography by Yoshio Miyajima and reserved pacing by Kobayashi, the early shots of Hanshiro following a retainer along the clan's compound corridors indicate the duality and message that is about to unfold, the retainer in light and Hanshiro in dark clothing, the clearly ageing ronin a metaphorical shadow of the young man who leads him onwards. As they pass the doorways, the pair are never in the same shot as the intervals of the openings on the walkway are timed as such as to show only one at a time even though they are both in motion, as if they inhabit separate time-lines, but Hanshiro's very presence is to be a stark warning of the fate that may befall all who hear his tale.

This duality and repetition is present in the scripting as well; Saito's relaying of the incident of the last young samurai asking to use the courtyard for the same purpose has pauses, clearly wishing to dissuade Hanshiro from making the request without the intention of carrying it through. It comes to light that due to the aftermath of the battle of Sekigahara and a severe government, many clans were disbanded which has led to a flood of impoverished samurai, some of whom have approached the remaining affluent clans asking to commit hara-kiri, but merely in the hope of being paid to leave. Each time Saito stops his recounting of the last such incident, he asks Hanshiro what his intentions are, and each time he is given the same answer, with exactly the same expression. The scruffy ronin before him seems confused as to what matter his host is asking about, “You mean....about this?”, then mimes his own slow disembowelment. He is not to be swayed from his decision, despite a painfully visceral tale of what befell a fellow samurai, who was to hamsfistedly impale himself on his bamboo sword. Some have questioned the directors need to show the act in such totality, but Kobayashi doesn't shy away from the bloodshed because to do so would not only undermine the potency of the film but also the character transition of the protagonist; it needs to be excruciating and hard to watch, we must know how terrifying, protracted and ultimately truly unedifying the act was to be, just as Hanshiro does.

“Our lives are like houses built on foundations of sand. One strong wind and all is gone”

The strata of Kobayashi's indictment of martial valour and a society based around twisted notions of honour are slowly peeled away once Hanshiro has taken his place in the centre of the courtyard, ready to die. He is to choose a second (a skilled swordsman who will remove his head once he has performed the requisite horizontal and vertical slices to his own abdomen) , but unfortunately his preferred man is not present, so the counsellor, clearly swayed by the ronin before him and his resolve, sends for the retainer, who has been taken ill but may still be well enough to appear for such an honourable task. In the interim, Hanshiro declines the offer of a comfortable seat and refreshments inside, in favour of recounting a story, hoping that his last words may be of some use (though he humbly indicates they may be ramblings) to those around. Once more, Saito is impressed and instructs all present to listen with intent at what will no doubt be precious words.....and the tables begin to turn.

“The hardscrabble tales of a half-starved samurai don't amount to much, but what befalls others today, may be your own fate tomorrow”

Hanshiro admits he knew the previous samurai beseeching them for the use of the courtyard to commit hara-kiri, and with that the game of cat-and-mouse is afoot. The framing continues to emphasise Hanshiro's central position, if he is up to something then he is wildly outnumbered, but Nakadai's depiction of the character exudes calmness and the sort of assured confidence disguised as humility and confusion that, for most other actors, would be career defining, but for a man whose credits include Sword of Doom, Kagemusha and countless others it is just another peak in a series of mountainous acting performances. It is a master-stroke of casting that sees Rentaro Mikuni as his opposite number in this duel of wits, as his worrisome brow starts to give away his unsettlement; a picture of nuanced trepidation towards a danger he is yet to fully comprehend both in terms of its purpose or the manner in which is is to be executed.

A seemingly straightforward drama of a recounted yarn of poverty quickly metamorphoses into an inspection of the samurai code; through a painful backstory of heartbreak and timeless human tragedy, those hoping for a narrative of sword fights and honour are confronted with a stark reality and reappraisal of values, just as Hanshiro is. The interplay between a man intending to die and the counsellor granting his wish is slow burning but has an inferno at its heart. The sneaking sense that Hanshiro has ulterior motives becomes less of an inkling and more of an inevitable reveal, but just as Saito comes to this conclusion, the social mores attached to his part in the ceremony of hara-kiri and the code he claims to hold dear become as much of a hindrance as anything. A mental chess game of civility with the swelling waters of unrest beneath, the climax of which doesn't disappoint. We are treated to one of the most exquisitely shot duels, perhaps not in terms of swordplay but in sheer atmosphere and cinematography it is startlingly beautiful and terrifying all at once. The final reel brings with it not only the most thrilling scenes but also the most poignant indictment of samurai values, something Hanshiro, through all his plan, hasn't truly deviated from despite his resentment of all they have come to represent.

“After all, this thing we call samurai honour, is ultimately nothing but a façade”

A rewatching is essential, as the early scenes of a young samurai goaded into impaling himself on a blunt bamboo sword are hard to watch first time around, but once the full story of his circumstances is known to the viewer, on a repeat watch it is almost unbearable, and that plays perfectly for Kobayashi to get his point across. This is not a small film about the struggles and heartache of the underclass in any society - the cruelty of individual instances would make this film a drama, but the indication that history as whole will wash over such acts is far more crushing than any bloodshed or poverty.

“Who can fathom the depths of another man's heart?”

Enigmatic and with an appraisal, nay dismantling, of core ideals that underpinned an entire era (as well as arguably a fair chunk of the Japanese movie industry at the time) and were still lingering in society at the time of release, Harakiri is a seminal example of a small scale tragedy acting as a symbolic message that ripples exponentially further than the minor circle of characters it primarily affects; it is easy to see why Miike would choose such material as a follow-up to 13 Assassins. Kobayashi draws us through a cinematic portal, not only into a past time but also into the fluxing mindset of Hanshiro, a man in turmoil who has come to the end, forcing us to experience all his pain and suffering, but even in victory not sparing us the coup de grace, that for all his condemnation for those around him and himself, valuing a sword above a human life and the pomp and pretentious masquerade that blurs the lines of empathy, he cannot escape that he is to follow his word and die a samurai's death.