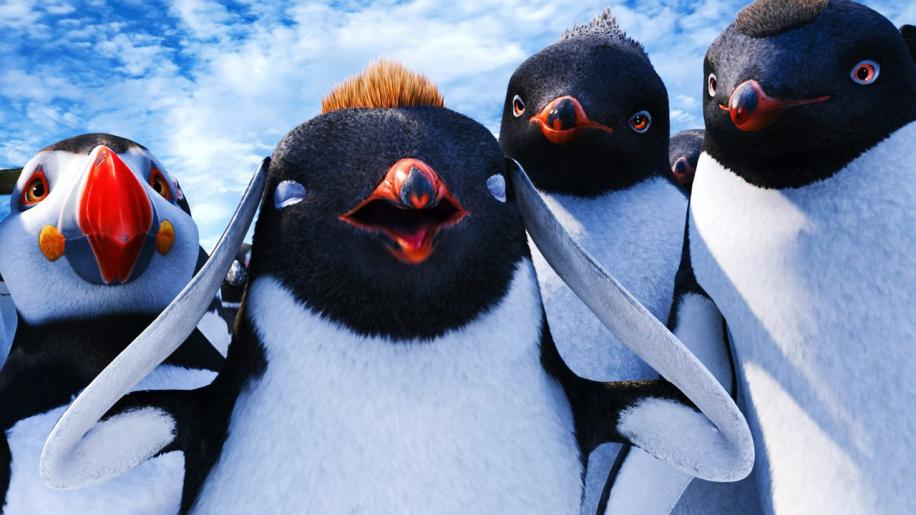 I’ve never seen Happy Feet. There, I’ve said it. Never seen it, have no desire to see it. Oscar winning dancing penguins? Does nothing for me. So it was with more than a little trepidation that I spun tonight’s feature the sequel to Happy Feet, entitled, rather imaginatively, Happy Feet Two. Although with George Miller at the helm, a director with some calibre (the Mad Max trilogy and Lorenzo's Oil to name but three) there was, along with that Oscar win for the first film, at least some light at the end of the tunnel. Or that is what I thought. Unfortunately this sequel is a rather muddled mess of a movie that, despite all the grandeur and style, fails to have any real dramatic narrative or, worse still, any point to make and seems to exist purely because of that previous Oscar win. However, let us strap on our dancing shoes and tap away at tonight’s feature presentation, Happy Feet Two in 3D.

We open to a huge song and dance number as the Emperor penguins join together in one monumental song; everyone gets involved in the dance moves from the smallest chick to the eldest bird. Everyone that is except Erik, a new born, and still quite small chick, that seems to be embarrassed about joining in; he self consciously looks around him as all the other penguins sway and tap their feet, even his friends, and he can’t even bring himself to nod his head. This seems at odds with the colony, and even more so when you consider Erik is the son of Gloria and Mumble; both of whom were responsible for bringing singing and dancing to the Antarctic in the last film. When his father’s words of encouragement finally give Erik the courage he needs to join in, he slips, falls on his head and wets himself – and despite his friend’s best efforts and his father’s presence, his worst fears are confirmed, the colony laughs at his misfortune. Being hurt and feeling alone Erik hides in a small hole wanting to be left alone.

The opening of a film should serve to introduce to the audience the main characters, set out the dramatic narrative and give an idea on the overall plot. From the above opening we could guess that out main protagonist is Erik and we are to follow him as he comes to terms with his place in the world and follow his journey of gaining the courage needed to fit within it. But that is not what this film is about. Indeed as soon as this thread is established with Erik, followed by his friends, leaving the colony following Ramón (a Chinstrap penguin) who wishes to return to his own colony to find a mate, than the drive changes with the introduction of a revered ‘God-like’ penguin that can fly (actually a puffin that is plainly obvious from anyone with even the most basic ornithological knowledge) called The Mighty Sven. Suddenly the film looks to be discussing cults, brain washing and misplaced devotion. And just when you think you have a handle on this new revelation the film cuts to krill in the ocean and introduces us to Will and Bill; Will wants to know what is outside the swarm and this revelation leads to his being fed up of being at the bottom of the food chain and his subsequent wish to evolve into something higher up. And that is not the end of the story thread introductions; Elephant seals that do not back up, parenting concerns, spousal infidelity, chasing a mate, bravery, human rescue not to mention the broader themes of climate change, environmental issues and Karma. Seriously there is so much going on in the film that it simply does not know where to go. Developments are introduced and dropped with alarming regularity never to be resolved or mentioned again. As a consequence there is little drive forward as we are not ‘following’ any one story but being asked to dip in and out of several concurrent ones. Indeed the only real story thread that has any forward momentum and comes to any sort of conclusion was that of the two krill’s, Will and Bill, whose narrative punctuates the ‘main’ film and contains all the adventure and empathy that is needed to make a film work, add to that Will’s prophetic statement of “What can one krill do” actually meaning something in the climatic race to save the Emperor penguins you have a complete and rounded story – this is where the heart of the film should have been. But alas we have to suffer through story threats that purport to be dramatic but then dissolve into yet another song and dance routine, it very quickly becomes tiresome.

But what of the acting talent, well Warner has not shirked there. Returning from the first film there is Elijah Wood as Mumble, who, for reasons unknown still has his baby feathers despite having fathered a son, I guess his character still had to remind the audience of what he looked like – it’s just one of the many inconsistencies that are scattered through the film. As to Wood’s performance, there is very little to say, his lines are delivered satisfactorily, but the part does not require much and therefore there is not much given. His spouse, Gloria, is voiced by Alecia Moore (P!nk), who replaces Britney Murphy who tragically died of pneumonia far too young, and much like Wood, isn’t asked to do much with her part since the part does not demand much from her, still she does well in the role and shares some nice chemistry with her son and the surrogate children she adopts during the later crisis. Their son, Erik, is voiced by Ava Acres, who, at eight years old, already has a very impressive résumé and does give a decent enough performance that encompasses joy, sadness and will power; it is just a shame that the film has so little to do with Erik’s journey that as soon as she has something emotional to delve into then the film cuts to another different element of the narrative. Robin Williams returns for the part of Ramón (and Lovelace) and does much the same as he always does with such a small part, i.e. is very over the top, but his heart is in the right place and he does at least sound like he is winning the heart of his affections. Brad Pitt and Matt Damon give the two wily krill, Will and Bill respectively, voice and their banter works really well; Will’s determination to discover more of his universe is bookended very nicely with his discovery that being alone is not all it’s cracked up to be; it's filled with plenty of empathy and you actually care about his plight (even if it stretches way beyond the realms of plausibility, which, if anything, goes to show how well Pitt embodies his inner krill) while Bill is ever the pragmatist. Other big names such as Hugo Weaving and Anthony LaPaglia as well as Nicole Kidman and Hugh Jackman (actually un-credited cameo’s) add further weight to the acting talent, it’s just a shame that they are asked to do so little with a script that does not know where to go.

As well as a gaggle of terrific voicing talent the film actually looks quite spectacular; clearly designed with 3D in mind there are sweeping vistas, voluminous solidity to the characters, and so much depth atop a typically gorgeous CG animation, and although I go into more detail in the picture section, it is sufficient to say that the film looks stunning. But as we all know a good looking film, even one packed with talent, won’t hold much (if any) attention if there is no real narrative drive. In fact it’s been five years since the original film; you’d think that in that time a decent, strong and above all coherent script could have been developed. Instead we are left with a meandering piece that simply does not know where to hang its emotional hook. And it tries so hard to emote; the two baby Elephant seals thinking they are going to be left alone, the monumental effort of the Emperor penguins as they try anything (including trying to fly) to escape their prison, Noah the Elder’s impassioned speech to stand strong against the Skau attack, Erik literally hanging by a thread and, of course, the typically feel good ending all conspire to try and grab your heart strings and give them a tug – but since our attention is divided too thinly over all the differing story arcs some of which get resolved, many of which don’t, it really is a case of an overload, with the net result being a severe case of not caring one way or the other.

It is not as if Miller doesn’t have an idea on how to tell a story, his back catalogue, of which I’ve only mentioned a very few, show just how well he can pace and deliver a dramatic telling. Perhaps the adding of one or two too many writers or producers tipped the balance from a tight series of stories to a whole bunch of interconnected but nevertheless inconsistent ones, because the resultant film is just too messy to have any real merit. And a song and dance number does not provide a satisfactory conclusion to a story arc, or a dramatic situation, despite the films desperation to prove otherwise. It is entirely possible that children will be swept away by the majesty of the visual excess, or caught up in the (many) song and dance numbers, but for everyone else there really is not much to recommend. Watch for Will and Bill’s underwater adventure; just try to ignore all the above water bits as they only get in the way of an otherwise great story.