No more gingerbread, it's time to kick ass! 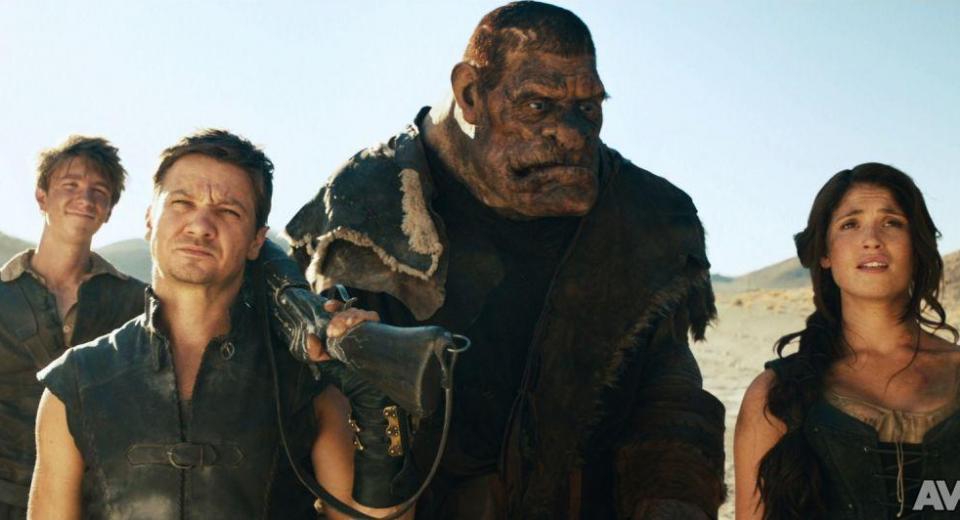 It's as if by some black magic or some unseen sorcery that Hansel & Gretel manages to remain completely and utterly devoid of any substance worthy of praise for its entire running time – which, by the way, feels like an eternity. Billed as a light-hearted faux-modern take on a well known fairy tale, it's a staggering disappointment in every sense of the word. I'm bewildered as to how the director of the much lauded Dead Snow could have gotten this one so very, very wrong. Perhaps it was a blasé approach inherent to the success of his nazi zombie flick, but whatever way you sugar-coat the blame, it surely lands at Tommy Wirkola's gingerbreaded door.

Hansel (Renner) and Gretel (Arterton) are bounty hunters. They hunt witches. Having been abandoned by their father in the forest as young children, they stumble upon a cottage made of candy where they are captured and force fed sweets by an evil witch to fatten them up. They of course escape, but Hansel and Gretel are, shall we say - damaged goods. Gretel's temper is sharpened by her childhood experiences of being abandoned and then almost being roasted by a witch, and Hansel has developed diabetes and is insulin dependant due to all the sweets the witch fed him. Basically, they're angry people, and they take that anger out on witches across the land. Whilst on one such witch-hunt, the siblings discover that their target may possess a dark secret that will unlock their mysterious past. Crossbows, Trolls, witches and magic are never far away in this “inventive” re-telling of one of the most famous fairytales of all time. Truth be told – you'd do better to use your own imagination and spare yourself the droll mundanity of enduring this feckless gore-fest.

It's really quite sad because the story of Hansel & Gretel, one of the most famous in history, seems to have been processed and rushed far too quickly. Within a matter of 3 minutes, the movie is done with the Hansel & Gretel characters we all know from the fairytale. Director Tommy Wirkola clumsily and unnecessarily reinvents the characters in such a way that they are entirely unrecognisable, and in doing so completely distorts who they are. This subsequently mutates the whole tale into a dull and utterly forgettable freakshow that bears such little resemblence to the original characters that it might as well be called Torville & Dean: Witch Hunters.

For ninety eight minutes this chilly torrent of drivel prodded at my patience with a big knobbly stick, occasionally pausing to remind me of how Jeremy Renner, along with his impenetrable on-screen woodenness (Hurt Locker excused), has stooped lower than I ever thought possible - while the effervescent and fiendishly beautiful Gemma Arterton manages to crow-bar in enough cringe-worthy one liners along with a grossly misplaced and freakishly unconvincing head-butt, it's enough to make you wonder whether these two A-list actors owed somebody a favour and ended up here.

It's all well and good to dislike the movie, but are there any saving graces? Well, the CG is not half bad. It's no Hobbit or Man of Steel, but it's fairly convincing in a cartoon-like and fantastical way. Some of the witches' make-up and movements are quite eerie and the production design is worth a nod too, with carefully thought out settings and decent lighting, and an arsenal of imaginative, almost steam-punk-esque style weaponry on display, but it's all smoke and mirrors to pull your attention off the abysmal narrative, or lack thereof.

To top it all off, guess what? This is the "Extended Cut" - which effectively means you're getting a full 10 minutes more than the theatrical version had. Normally this would be a bonus, but if there was ever a case for leaving the rubbish on the cutting room floor, it's this. If you're into gore and gratuitous lingering shots of flame engulfed witches, or heads being popped or bodies being torn apart, you'll probably be thankful of the additional 10 minutes. Personally, I would have been thankful for an "Un-Extended Cut" with 10 minutes less than the theatrical version just so the whole torid experience was over quicker. Perhaps it could have been called the "Put-them-out-of-their-misery Cut"