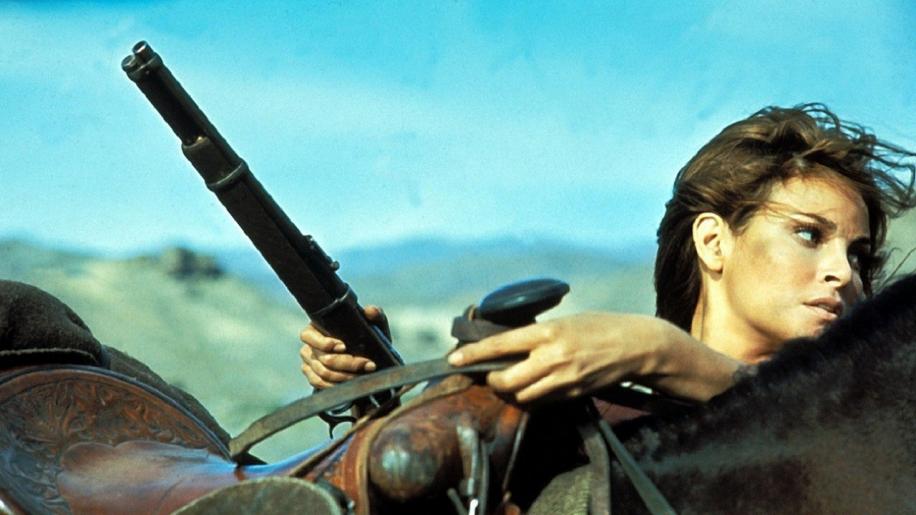 Mention the name Raquel Welch and most people will think of ‘One Million Years BC’ or ‘Fantastic Voyage’, but there are one or two films that the pneumatic sex symbol made during her movie career that don’t get a lot of air time on TV. ‘Hannie Caulder’ is one of them and it’s a movie that I saw once as an early teenager and have never seen since. Its other claim to fame, as far as I’m concerned, was the fact that it was one of the few movies that you could buy as a full length feature on the Super 8 home movie format that took up four 400 foot reels. That was way before VHS or Betamax home video had been invented and was only available to the few of us (a true minority) who’d invested in a movie projector.

So now, forty years after its theatrical release (in 1971) we’re blessed with a Region free American Blu-ray disc, courtesy of Olive Films. It’s an interesting film inasmuch as it was produced by British outfit Tigon Productions who were more famous for low budget horror movies that attempted to continue the Hammer tradition. Shot in Spain, it was directed by old Western hand Burt Kennedy (‘The Train Robbers’) and featured a strong supporting cast including Robert Culp (‘I-Spy’ TV series), Ernest Borgnine (‘The Wild Bunch’), Christopher Lee (I don’t really have to tell you what he’s done, do I?), Strother Martin (‘Cool Hand Luke’) and Jack Elam (‘Once Upon a Time in the West’).

Not monumentally long with an 85 minute running time, it tells the simple tale of a bunch of inept Bank robbers, the Clemens Brothers (Messrs Borgnine, Martin & Elam), who happen across a small ranch where they kill its owner and then rape his good looking wife, Hannie Caulder (Ms Welch). Afterwards she enlists the help of a Bounty Hunter (Robert Culp), who teaches her to use a gun, and a kindly gunsmith (Christopher Lee) who makes a custom built hog leg for her. She then spends the rest of the picture tracking down the three men who raped her. Does she succeed? You’ll have to watch it to find out.

Seeing it again after forty years, there were flaws that jumped out at me that I hadn’t been aware of as a teenager. Probably the most noticeable was just how incongruous Ken Thorne’s music score seemed, giving the feeling that it had been tacked on without him having actually seen the work print of the movie. While Mr Thorne was responsible for the scores on some of the Christopher Reeve Superman movies and many others, his work on the incidental music for the TV series ‘The Persuaders’ is what sticks in my mind. There are strong similarities in style here as his stings and underscores assault our ears and stab our senses.

Many people (usually other actresses) claimed that Raquel Welch couldn’t act but she gives quite a strong performance as the titular (had to get that one in) heroine as she covers the full gamut of emotion. On top of this she’s very easy on the eye and that’s always a pleasant bonus. Robert Culp, too, works well as the experienced Bounty Hunter who reluctantly agrees to help Hannie get herself killed – as he sees it. Christopher Lee eschews his fangs and red lined cape to portray a gunsmith with a continually growing family. They’re both quite sympathetic characters and their on screen chemistry ensures credibility.

The three villains of the piece, the Clemens Brothers are all played by case hardened actors (Borgnine, Martin and Elam) who seem to have been directed to play it for laughs as they bicker like old women for most of the picture and it’s hard to take them seriously as ruthless killers. It was almost as if the director had told them that Raquel Welch was really playing Cinderella and they were the three Ugly Sisters. After the rape scene near the head of the movie, I found it rather odd that we were then being treated to a comedy turn from each of the three rapists. It’s hard to get a laugh from characters who have committed such a deplorable act.

Diana Dors pops up for a moment or two as the local Madame, but she’s woefully underused here. I guess they couldn’t have two sex symbols in the same movie. Stephen Boyd makes an uncreditted appearance as ‘The Preacher’ – another Bounty Hunter who is feared by all and hails from the strong but silent school of acting.

The prize for the most efficient use of one piece of artwork to create a title sequence should have been awarded to this picture as the rostrum camera pans, tilts and zooms its way around the single arty shot of Ms Welch drawing her guns – and she gives a whole new meaning to possessing a ‘pair of 38s’. You could imagine the briefing to the camera operator being along the lines of, “Look, we’ve only got the one background so make the most of it.”

Ted Scaife’s Panavision camerawork is impressive as he uses the widescreen 2.35:1 canvas wonderfully to capture the landscape and, indeed, the beauty of the leading lady. It’s been a while since I’ve seen a movie where the blood being spilt bears such a close resemblance to Crown Gloss red that you can almost smell the fumes, but it reminds us of days gone by where the gore was not too realistic.

Despite its flaws, ‘Hannie Caulder’ is still a satisfying Western that leaves no cliché unturned and overall is quite a stylish piece of moviemaking. It’s an oddity that most Western movie buffs should add to their collection.