Hands Of The Ripper DVD Review 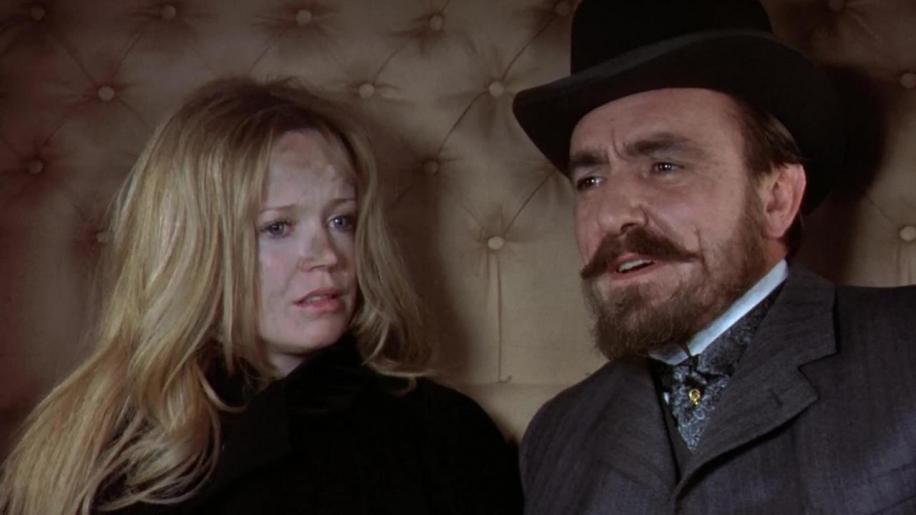 The anamorphic 1.78:1 image is blessedly free from grain and exhibits scarcely any print damage at all. In fact, all I can really comment on is the slight frame jump that occurs during the Whispering Gallery sequence. Blacks are strong and fairly robust, with a decent contrast displaying light and dark in the same shot with accuracy. However, there are occasions when shadows can look a little grubby or smudged.

Colours, though, appear muted and dry, lending the film a kind of jaundiced look which is a real shame as Hammer films usually take on such a resplendent array of hues and visual flamboyance. Skin tones can, therefore, seem a little ill and pallid. Blood, however, does look suitably bright and gaudy. And, despite a slight softness to the overall image, detail can often be quite revealing with some nice attention paid to the nick-knacks filling up Pritchard's house and the splendid costumes on display.

I had no trouble with edge enhancement or blocking and found no obvious signs of compression errors, which was nice. Overall, this is a decent transfer that just lacks the normal vibrancy associated with Hammer. Although billed as being just a 1-channel mono track, Hands Of The Ripper sends the signal out via both channels and, to be fair, sounds just fine. The reproduction of the original soundtrack is clear and distinct without coming across as either tinny or harsh and I heard no evidence of drop-out or fading. From the voices and screams to Christopher Gunning's mysterious-cum-lushly romantic score (atypical for Hammer and not particularly memorable in my opinion) and from the clacking of shoes and hooves over the cobblestones to the raucous babbling of the whores in the police cells, the track is never less than clean, atmospheric and eventful. Besides the obligatory theatrical trailer, we have a small Image Gallery, a well-put-together booklet of viewing notes by horror historian Stephen Jones, which fills in the background to the film and its major movers and shakers, and then a fairly decent commentary from Jones and fellow horror writer Kim Newman, and star Angharad Rees.

Now, I have become quite a fan of the Newman/Jones double-act lately and find their brand of fan-based banter, observation and opinion quite infectious. Their track for Mark Of The Vampire on the recent Legends Of Horror boxset is a pure joy, but it has to be said that they lose a lot of their vigour when joined by somebody else, as evidenced on The Medusa Touch and, sadly, upon this release too. Here, we have a few awkward silences and a fair bit of prompting from Jones, particularly, to goad some responses from Rees. The actress is often slow and faltering but, when pushed, can still come up with some decent anecdotes about the film. Jones obviously feels that he has to keep things going and, as a consequence, can occasionally repeat the odd question and veer away from the film itself into Rees's later career at large. Newman is content to have a giggle now and then and to keep quiet when Rees's memory is obviously at odds with his own comprehensive knowledge of the film. Still, this is an entertaining enough track for fans of the film - but I would still prefer to have the pair unleashed without the dubious company of a memory-lapsing star or director.

And, fleshing out the roster of extras is a bonus episode of the 70's TV show Thriller, devised and written by Brian Clemens and starring Angharad Rees. Called Once The Killing Starts and running for just slightly over an hour, this great little tension-builder also features American ex-pat Patrick O'Neal, Patricia Donahue and Michael Kitchen. Typical seventies fare, although it does feature a brutal bludgeoning, this bumbles along in that alternate-reality of TV crime fantasy, focussing primarily upon the killer and his emotional paranoia. It isn't that clever, and its only connection to Hands Of The Ripper is Angharad Rees (unless you count the tenuous link that Clemens wrote Hammer's other Ripper movie, Dr. Jekyll & Sister Hyde, as well as Captain Kronos Vampire Hunter) but I enjoyed it, just the same. Hands Of The Ripper is a fine horror film that takes the cosy old Hammer aesthetic and gives it a thorough shake-up. The violence - for its day - is pretty ripe and the theme of sexual psychosis is a heady one for what many still consider to be just another period romp. With a hero who is obsessed with a pretty young killer to the point where he will actually help cover up her crimes and even blackmail an innocent (ish) politician, and a murderess who may, or may not, be possessed by none other than Jack The Ripper, the film seems to take pleasure in subverting the norm, and is never less than entertaining. This Special Edition from Network is a pretty respectful release too, with a decent transfer and a small, but effective package of extras.