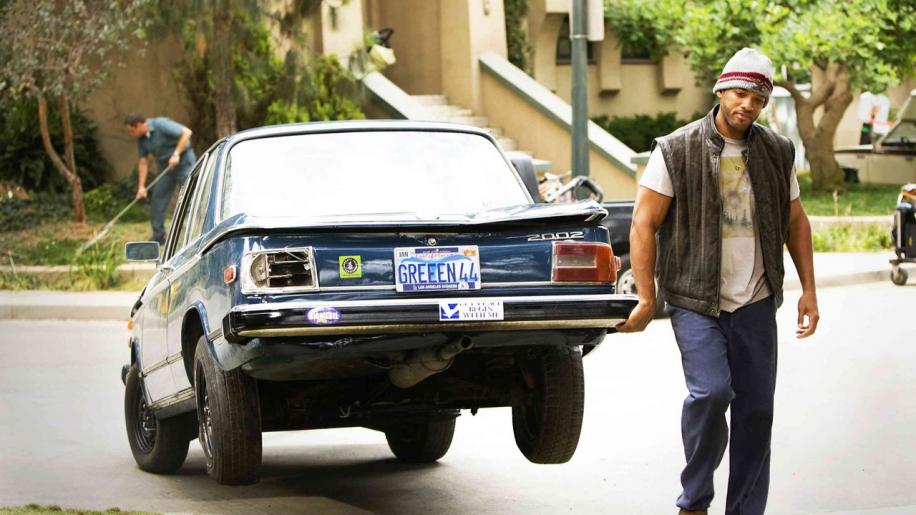 Chris Nolan's The Dark Knight (2008) was one of this years biggest superhero blockbusters. Following on from his very successful Batman Begins (2005), The Dark Knight was not your typical superhero fodder; it dealt with action, consequence and how those consequences affect not only the 'heroes' but everyone around them. It was a dark and moody film and written with such relish that it was destined to become a monumental hit. Coming out around the same time was tonight's feature Hancock and whilst it deals with very similar themes it takes a far more personal approach, but never really has the power of its convictions and meanders around the subject, taking in genres and ultimately falling at the last hurdle.

When we first meet the titular character he is drunk and asleep on a street bench, while a little distance away a violent car chase shootout is occurring. A small boy wakes him and after a little cajoling finally flies off to 'save' the day, though in this might better be defined wreck. We are invited to reflect upon the persona of Hancock, a super strong, super fast flying super hero that prefers to drink, sleep and be a general bum; he is unwashed, uncouth and in everyone's eyes unsuitable for the gifts he possess. We are meant to feel distain for this person, wonder about his past and what made him so; the trouble is he's being played by Will Smith a person so effortlessly a star and so damn likable it's difficult to see past!

Next time we meet Hancock he is saving Ray Embrey (Jason Bateman) from being crushed in his car by a train; this typically ends in disaster as Hancock flips the car and proceeds to get hit by the train himself causing it to derail. Ray is a PR man, trying to sell his ideals of a brighter future to multinational companies by getting them to distribute key products free to the developing world. After he is saved he witnesses the backlash Hancock receives by the crowd of angry people sick of his wreck inducing antics. Hancock just stands there taking it, insults, like bullets, don't penetrate his skin. Ray immediately jumps to his defence, proud and thankful to have been saved and this single event changes their respective lives forever. Inviting him home Ray introduces Hancock to his family and there is an immediate spark between him and Mary Embrey (Charlize Theron ) something that neither of them can explain. That spark soon turns to distain on Mary's part as she tries in vein to persuade Ray to give up on Hancock; but he refuses since everyone else already has and decides to use his PR skills to reinvent Hancock to an unwilling public.

When the public demand that Hancock go to gaol for his disruptive rescues Ray seizes upon this chance believing that you never know how well off you are till its gone; so just like Superman being killed, Batman committing suicide and Spiderman hanging up his suit, Hancock takes himself off to gaol and promises to abide by the rules. Something he, at first, finds very difficult to accept, but after a while with time alone and solitude he begins to rest and recoup; even sharing feelings, however short, with fellow inmates and returning to the pen after flying out to collect a miss-shot basketball. While he is away the crime rate sores with one particular standoff involving hostages and a gun battle seeing the chief of police asking for Hancock's assistance. Having worked on his landing and even donning a uniform Hancock saves the day with minimal damage and, how fickle the mob, immediately secures the gratitude of the people.

Later that same evening Ray, Mary and Hancock celebrate with a meal in which we find out the heartbreaking truth behind Hancock's previous behaviour. It seems that eighty years ago he woke in a hospital bed with a caved in skull and now suffers from amnesia, so he no longer knows who he is or was and as far as he knows is all alone in the world. This is a very touching scene and goes far further into emotional depth than anything preceding it. Smith once again proving he can plumb the emotional depths when asked too. He speaks with a straight face and a little waver in his voice, as if recalling for the first time to anyone but himself; Theron providing the emotional anchor here, she becomes the emotional wreck to empathise with all of Hancock's physical wrecks. At the end of the evening, with Ray drunk in bed, the spark between Hancock and Mary finally boils over; their chemistry mixes and they bond. Again, shot in such a way as you can see it a mile off, there is a genuine chemistry between these two fine actors; you can see the turmoil in their minds and feel the heat between them. Then suddenly the film takes a very different twist and one that I did not see coming. Up until this point the film has been reasonably predicable; helping the helpless, action and consequence, humbling and coming to terms. And just when you think you know where the film is heading it pulls the rug from beneath you.

Directed by Pete Berg with a frantic and almost jittering style he injects the film with the kind of pace one might expect for a high octane thriller; unfortunately Hancock isn't that type of film. In fact Hancock doesn't define itself to any genre but spreads itself too thinly across several. There is not enough action to encompass the action element, it isn't funny enough to be called a comedy neither is there the emotional depth to call it a drama and whilst some films can flitter about genres becoming indefinable and get away with it, Hancock doesn't. At its best Berg looks at how an individual totally alone in the world and set apart from it becomes a near recluse wanting essentially to be left alone, but drawn by the ethical dilemma to help, however clumsily, and the way in which his action affect the world around him. Hancock may be super but he is barely a human being; and the world around him treats him as such; beat an animal enough it becomes withdrawn; well Hancock has been beaten enough. It takes far more strength to come out of his shell than stopping any train. But at its worst the inability to define itself Hancock means it looses its way, and instead of becoming a different slant on a new idea, just becomes rather run of the mill and dare I say ordinary.

This is a shame because there is much to like in the film; Smith is as terrific as ever and he is ably supported by Theron, when they are on screen together they sizzle. The action sequences work very well, the beginning shootout, the bank robbery and the super punch up all come across with a keen eye and enthralling entertainment. It's scored by John Powell (whose credits are far to numerous to mention) and he gives is a rousing but emotional core. There are moments of real tenderness and it has a climax that genuinely plays on your emotions. But the sum of these parts don't manage to add up to a cohesive whole meaning that even though there is a decent enough journey it ultimately ends up as unsatisfying.