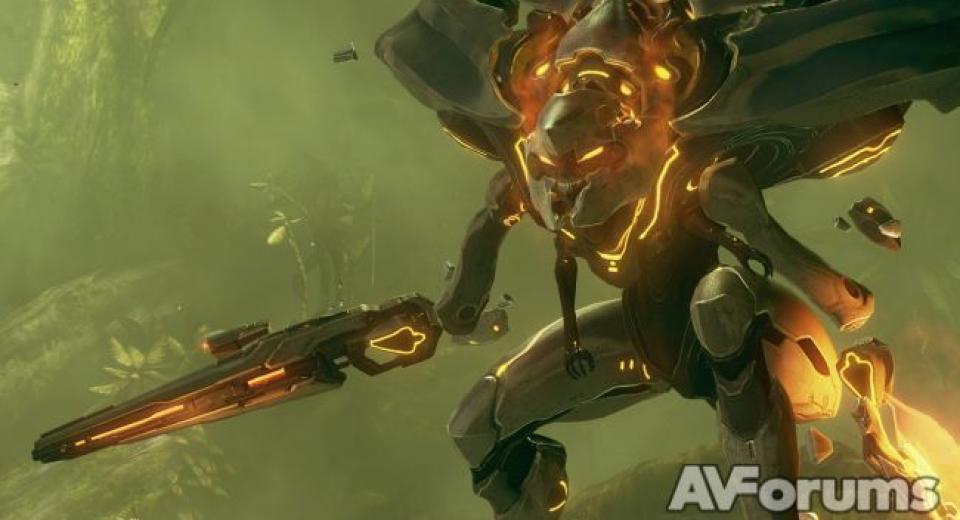 It's been two years since creators Bungie set sail from the Halo franchise and 5 years since Master Chief was left frozen on the adrift UNSC Forward Unto Dawn. Whilst Bungie closed off their trilogy pretty neatly; the legendary ending of Halo 3 left the door slightly ajar for 343 Industries set up shop and start their own "Reclaimer" trilogy.

Whilst they have been cutting their teeth around the fringes of the Halo universe for a while developing Waypoint; the hub of all Halo information, eventually taking the reins of Halo: Reach when Bungie moved on and handling last years Combat Evolved remake, this is their first time centre stage, taking full control of the next numbered sequel in Microsoft's premiere franchise. You can almost feel a collective breath being held...

We start (in a nice Combat Evolved nod) waking from cryo-sleep; as if to make a point the beginning of the game plays a lot like standard Halo with you shouldering your trusty assault rifle and that popular Magnum to bring the Spartan brand of hurt to all your old Covenant favourites.

The first thing you immediately notice are the upgrades 343 have endowed the engine with, great care has been taken to redesign all the enemies and environments we have become so familiar with. Halo has always had an almost cartoon like feel with its bright colours and sci fi designs; this is still maintained but a more realistic filter has been applied. This also shows through in the sound design where everything now appears to carry more weight; with weapons adding some serious punch to their signature sounds. In a market where colour palettes seem to exist mainly in shades of brown some of the environments in Halo 4 are a true delight. It's not often I find myself stopping to admire the scenery but some of the vistas you come across are nothing less than works of art and almost force you to stop pushing the sticks forward.

This design is further enhanced by one of the biggest changes to the series since the inclusion of the Brutes in Halo 2. Halo is already as sci-fi as they come and if it's even possible they double down on this with the addition of the Prometheans. The new weapons are all introduced with some ice cool animations; the first time you pick each one up slickly showcasing the way they hover and snap together.

The enemies themselves add some welcome changes to the gameplay, once 343 have finished proving they are competent at replicating the series standard moves they introduce the Promethean enemies and start to make their mark. The Knights are teleporting warriors who tend to come with their own "Watchers" who hover over the battlefield protecting and occasionally resurrecting fallen enemies.

They add a nice change to the action; while the Covenant are adequate foes another game of sniping Jackals through the gap in their shields and pistol whipping Grunts would have gotten old very fast. The Prometheans keep you on your toes and turn out to be a core part of this new trilogy's identity.

Their "digital" nature permeates through everything from the way they disintegrate when killed and the Tron like illuminations which run through their bodies, weaponry and the world designs. Even the soundtrack which maintains its soaring themes with the occasional monk filled chorus; moves forward with some fitting electronic elements thrown in. All in all 343 stepped up to plate and succeeded in moving the franchise forward whilst maintaining its essence, small tweaks like helmet lights on snipers which help you pick them out from miles away show they are aware of the appropriate changes needed to improve the core experience without wildly changing it. The breadth of gameplay is still here ranging from classic corridor shooting to the expansive battlefields which cater to a range of approaches; broken up by some fun pallete cleansing vehicle sections. The roughly 8 hour campaign (depending on difficulty,skill level and if you chose up to three friends to join you over Xbox Live) does what it came to do and then some, I've always been a fan of the single player in the Halo games, having saved the planet from middle eastern terrorists at least 5 times this year it is nice to be lead through locations and plot points which are markedly different and not just a formality before moving onto the multiplayer.

Most will be hitting the multiplayer long before they wake the Chief from cryo-sleep; and it's here where 343 have made their biggest changes. Halo has stood steadfast for a long time, refusing to buckle as game after game followed suit in the standard gain XP, rank up and unlock weapons cycle. Everyone always started with the standard assault rifle; core to the gameplay was map control and most importantly the spawning of the power weapons, knowing where the "Rocks" (Rockets) or sniper would be spawning was key to success.

In a calculated decision classes and unlocking weapons are here, don't worry people wont be equipping rockets and a snipers from the off, class customisation is restricted to weapons of largely equivalent strength. I hate the standard assault rifle and therefore I would tend to gravitate towards the "Team SWAT" mode where the starting weapon was the much more useful Battle Rifle. Now I can simply create a class and customise my primary, secondary and grenade slots; choosing my personal favourite the single shot DMR or maybe you prefer the Covenant Carbine or the new Promethean Light Rifle; the choice is now yours. Power weapons are still obtained in the field; spawning in random locations which are now handily highlighted on your HUD when near them. After collecting a number of kills you can also get an ordinance drop directly to your current location which can contain a random choice of options such as an over shield, speed boost or a power weapon like the brand new "SAW" a Light Machine Gun which is criminally fun to use. The kills required can be accrued over several deaths so drops aren't restricted to the best players. Plus once you die anyone can pick up your freshly dropped weapon so make the best use of that Spartan Laser before it gets used on you when you respawn.

The first thing you'll notice when you load up your first match is the movement speed, finally everyone can run, granted it's not unlimited (that's hidden behind an unlock) but it's good enough to speed up the gameplay and make it feel a lot more modern. It's normal to have to adjust to a new set of shooter controls but the one thing which made Halo feel "old" was the inability to sprint as default.

Even the "Perk" system has been adapted into abilities which allow you to add  even more things to your load out like a deployable sentry, jet pack or camouflage depending on your play style. The unlocks keep coming with Tactical Package and Support Upgrades adding two more slots to customise with a range of options from quicker reloading to extra starting ammo. None of these things change the game as much as you might think; which is a testament to their subtle implementation. It still plays largely the same as the Halo of old, for better or worse depending on your opinion; however it's certainly more user friendly to those raised on modern shooters and adds that motivation of ranking up and improving your character which encourages you to play "just one more round".

If you're still looking for things to spend your Spartan Points on all the customisation options for your armour can also be bought allowing you to customise each individual piece to your liking. There is certainly more than enough to keep the average player busy and enough options that you can legitimately have different load outs for different purposes; larger maps may favour the DMR, Thruster Pack and Mobilty (unlimited sprint)  whereas you might find the assault rifle, Promethean Vision (highlights enemies through walls) and the extra ammo of Firepower of more use in the more intimate levels.

Other mechanical improvements are the long overdue ability to join games in progress and the option to instantly spawn upon death finally satisfying the now in built reaction to hammer X as soon as you die. Kills now pop up points on screen along with numerous rewards for "Close Call", "Protector" and the like

The laundry list of modes return including the standard slayer (deathmatch) game type, the Flood infection mode where players have a shotgun and a Magnum to defend themelves lest they join the horde and Regicide where the leader gets marked on the map and killing them nets triple the points of a normal kill. Halo has always had great variety in its gametypes and if the past levels of support are their model moving forward then they should continue to be added upon and improved over time.

The variety continues in the selection of 10 maps which represent both those large open maps like Ragnarok which is home to 8 vs 8 battles including Tanks, Warthogs and Banshees and  the small kill boxes like Haven where targets lie round every corner. The level of care taken to create these environments is impressive with the meticulously functional levels looking just as beautiful as some areas of the campaign.

Multiplayer will no doubt hold somewhat of a hazing for new players, changes have been made but the skills that have been honed over the last 10 years still apply; meaning new players will have a few respawns ahead of them before they can hold their own. Luckily 343 have just announced they are bringing back the clever Skill Rank system which provides you with a separate rank per game type which can go up and down depending on your performance and should match you with player of a similar skill level, hopefully making matches as enjoyable as possible. Spartan Ops replaces Firefight as the co-operative multiplayer element, with episode 1 included on the disc; consisting of five missions in each episode, a total of ten episodes are slated to come out all free of charge. It all ties into the multiplayer system earning XP towards your next level and its associated unlocks. They are loosely tied into the story with some cinematics but it's more about the gameplay giving you and your squad more reasons to work together and survive the different situations.

Rounding out the package as always are the Forge and Theater modes. Forge allows users to create their own levels with a preset set of tools on maps designed especially for tinkering. Theater mode allows you to replay all your recent play sessions at your leisure saving your favourite moments and screenshots to your file share so you can preserve those extra special moments.

343 have handled the unenviable task of continuing the Halo franchise with a deft hand, staying true to the established parameters to keep the fans satisfied but making enough changes to avoid churning out what easily could have turned into a unnecessary sequel. Halo continues to be one of the best first person shooters with both a genuinely epic campaign and with its modernisations; an addictive multiplayer, throw in free ongoing DLC, all of which is looking and sounding better than ever before and theres isn't much not to like. Die hard fans can exhale happy in the knowledge the franchise is the safe hands of a capable developer and those not so excited should take another look at the most exciting version of this franchise to date.