Over a decade on and still no Halo movie? 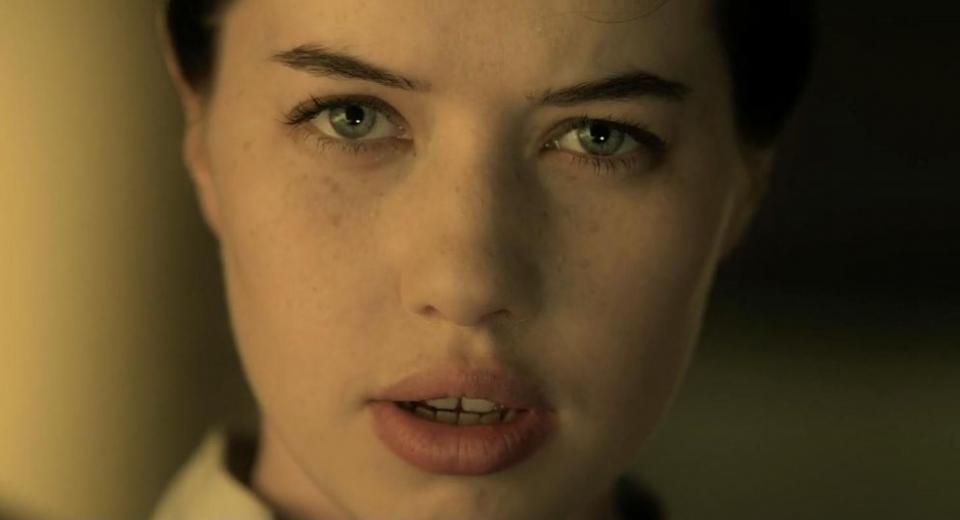 Halo 4: Forward Unto Dawn hits Region B-locked UK Blu-ray complete with a largely impressive 1080p/AVC video presentation matching up to the preceding US counterpart. Although inherently limited by the web series format – and $10 Million budget – the feature does look like an extremely glossy TV series pilot, even if it doesn’t achieve feature film quality. Detail is very good indeed, and the stylistic choices – lots of close-ups and slow-mo – lend themselves not only towards giving the feature a more filmic feel than it should technically have, but also towards making it look better on Blu-ray. All that said, there are some problems, most notably banding, which raises its head as the series shifts from the predominantly day-set first half to the night-set and action-packed second half. The whole feature is flooded with sepia and heavily saturated, to give a distinct Halo-universe feel, which works for the most part, again both helping the feature escape the limitations of its budget, whilst also preventing it from ever really being regarded as anything more than a specialist release. The colour scheme never really leaves sepia for that first half, but once night sets in and the bad guys arrive, the plasma weaponry ignites the darkness with screaming neon pinks and greens. Blacks are reasonably strong and allow for largely impressive night sequences. Overall this is a punchy, generally very good presentation that certainly does the best with the material.

The accompanying DTS-HD Master Audio 5.1 option easily bests this video presentation, however, because – unlike the video – it does not appear to be limited by the budgetary restrictions on the material. Dialogue comes across clearly and coherently throughout – it takes a while to get used to the Master Chief’s voice – and largely dominates the frontal array where appropriate. The score isn’t as thematic as you might expect from a Halo-universe feature, but certainly provides the surrounds with a little more to do whilst the action kicks in. But it’s the action that really brings the sound array to life, with mock skirmishes igniting the forest long before the Covenant arrive and grenades have to be lobbed here and there whilst plasma cannons blow the trees apart. The warthog is suitably growly, although its mounted gatling gun isn’t as much fun as it should be, and it’s in the explosive effects and immersive texture of these setpieces that the track truly excels and that the feature finally manages to leave behind its budgetary limitations. Beware that the feature defaults to 2.0 so you have to manually select the 5.1 option.

Although still boasting the same weighty 10-part Documentary that the US counterpart release had, as well as the half-hour of Extra Footage in the form of the Vignettes, unfortunately this release lacks the 3 Audio Commentaries, the Isolated Score and a few other bits. It’s probably not a deal breaker – the extras on this disc are far more than you would normally expect from a release like this – it’s just a shame that there is a better release out there.

Extra Footage
Vignettes: Enlist, Cryo, Joyride, Capture the Flag, Classroom Lecture, Squad and 7 Cadet Interviews. Each running at less than a couple of minutes in length, these snippets are actually more like 22 minutes of Deleted Scenes and not Behind the Scenes, with the cast members – in character – giving brief reflections on the title subjects. Some of the footage has been used in the main feature, but most of it is new (using the same sets of course) and we get to see most of the characters reflect on joining the academy; a couple of them talking about what cyrosleep is like; a trip in the warthog; more wargames; and plenty of one-on-one interview snippets that allow us further background into these characters.

Corbulo Academy of Military Sciences Recruitment Video is a 2-minute faux recruitment video for the Academy.

The disc is rounded off by a couple of Trailers for the main feature.

The massively popular game franchise – probably the only thing that has kept Microsoft in the gaming market for the last decade – has suffered numerous aborted film productions over the years, with still no firm idea of when we are going to finally get a decent adaptation. Forward Unto Dawn is more like an extended live-action promo for Halo 4, or a decent TV series pilot, and does not carry much weight as a feature film in its own right. Still it’s a good teaser for what we’d need in the real thing, and I’m sure fans will struggle to resist picking it up and revelling in all the great little nods to our favourite gaming moments.

On Region B-locked UK Blu-ray we get very good video and excellent audio as well as a impressive extras package – a release perhaps only let down by the knowledge that the US counterpart has a little more (including no less than 3 Audio Commentaries) to offer. Still, if you’re a big Halo fan, this is worth a look.