"There are a group of men called The Firm. They've been running things for a long time..." 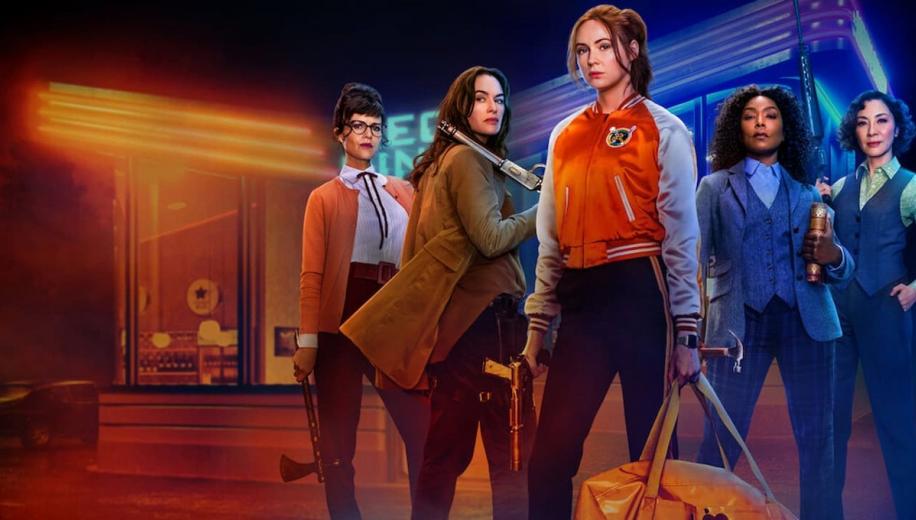 Bathed in vibrant tones and drowned in slo-mo, there’s definitely some veritable promise here, like a slightly offbeat female assassin riff on The Guest. A little dark humour, a lot of style, and a strong lead could have carried that all the way across the finish line, with decent action being the cherry on top. But Gunpowder Milkshake has a very different agenda, seeking instead to craft some John Wick-esque universe of underground all-female assassins, worldbuilding the hell out of the endeavour, and completely forgetting to tell a decent story and extract some decent performances along the way. They could have just called it The Expendabelles, but that would have probably set expectations too high.

... Netflix's own Kate trumps this

Sam is a master assassin, but after she completes her last mission a little too well, she finds herself being hunted by her own company as well as by a rival gang, turning to unlikely allies to help her cause, and an even more unlikely companion in the form of a young girl who Sam feels responsible for.

Gunpowder Milkshake doesn’t really rely on solid scripting, painting in the kind of broad strokes that could leave it tangentially related to something like Sin City, although distinctly lacking the self-awareness to double-down on the OTT noir in quite the same way that Rodriguez and Miller did. This probably wouldn’t matter too much, but, rather shockingly given how great a Nebula she is, and how much fun she was in the Jumanji movies, Karen Gillan plays her central role here with zero charisma. Sure, she’s supposed to be a detached killer, but she mostly comes across as bored and annoying, and only a few inventive moments make the most of the mayhem she gets involved in.

Fear not, though, because there are a whole slew of supporting actresses ready to bare their teeth, including Lena Headey, Carla Cugino, Michelle Yeoh and Angela Bassett, right? Right?? Oh boy this crew of fabulous heavyweights are not dealt a very favourable hand by the story, which soon becomes a kind-of makeshift unintentional Jane Wick outing that appears to involve a bunch of women assassins who, rather randomly, stash guns in books, and kill their male enemies in elaborate, faux-stylish ways.

They could have just called it The Expendabelles, but that would have probably set expectations too high

Perhaps Israeli director Navot Papushado - making his solo directorial debut here - hoped it would all come together in post-production, slapping a wild, neon pink colour palette over the whole thing, and basically deciding everything was game for slo-mo. Some of it works, but some of it really doesn’t, and ultimately Gunpowder Milkshake is little different from all the throwaway male-dominated action flicks of this ilk which have been churned out over the last few decades, making the fatal mistake of assuming it would be enough to merely change the sex of the main characters. They were average movies before, and they’re no different now. And perhaps the one thing all of those movies, and this one too, absolutely positively need to save them from utter mediocrity, were good action sequences, with Gunpowder lacking in that department too, conflating flashy style with satisfying fights, and leaving a neon-drenched bowling alley sequence an amateurish moment of unintentional comedy as a block-heel wearing Gillan attempts to navigate a clearly slick bowling club floor and look like her gingerly slow moves and positively cumbersome kicks are absolute ninja skills. Ah, who cares, cause that’s why we have slo-mo right?

It’s not all a loss. Dead arms lead to some inventive physical comedy, Cugino offers a singular moment of heart, and Headey’s good fun even in stupid trash, with My Spy and Big Little Lies’ Chloe Coleman being far from annoying as the young ward, and Paul Giamatti being, well, Paul Giamatti. As a Netflix (in the US) and Sky (in the UK) streaming release, it’s a watchable bit of throwaway nonsense not wholly unlike its male-dominated forebears, but the simultaneous theatrical releases are optimistic at best - a shame really, as this was a flick that a lot of people were hoping would be a real blast. Honestly, Netflix's own Kate trumps this, both on the style and action front, and Gunpowder Milkshake really ought to have been a whole lot better than this.

Gunpowder Milkshake arrives in Cinemas and on Sky simultaneously on September 17th.