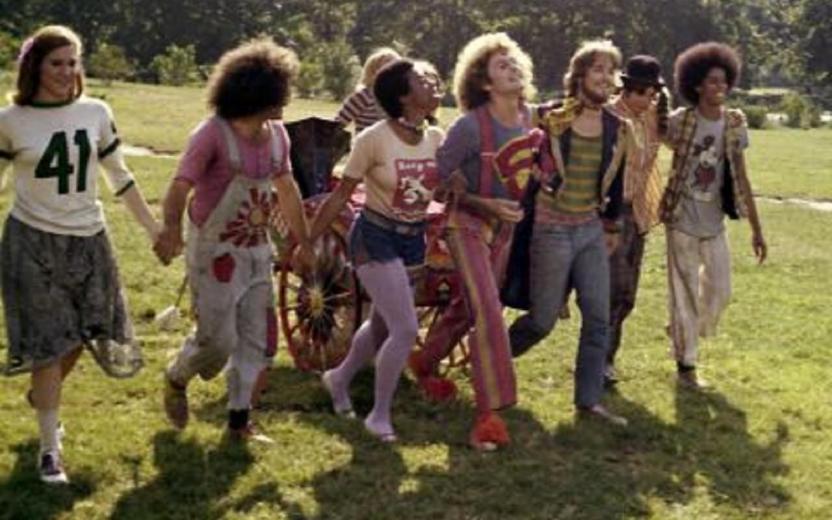 Jack Black is the Marmite man of American movie comedy. You either love him or hate him. I keep watching each successive picture in which he stars with the hope that one day I’ll find him funny and likeable. I’ve seen him in ‘School of Rock’, ‘Tropic Thunder’ and the truly dire ‘Year One’ – all billed as comedies, yet they failed to really tickle my funny bone and Mr Black just made me feel uneasy.

Now, when I heard that he was to star in a remake of ‘Gulliver’s Travels’, I thought that it had potential for his ‘over the top’ delivery and larger than life character. My hopes were raised even higher when I heard the supporting cast included Billy Connolly, Catherine Tate, James Corden and Emily Blunt (so good in ‘Wild Target’).With a bunch of talented comedians and actors, some of whom write and perform their own material, working together how could it possibly fail? How naive I was!

The American Region A locked Blu-ray spun in the drive of my player as I sat down to be entertained. Okay, so we’ve got the classic Jonathan Swift tale of Gulliver but we need to bring it up to date for the modern day cinema audience – and this is where things start to go awry. Lemuel Gulliver, as we all know, works in the Mail Room of a New York newspaper. He’s laid back, attempts in vain to be cool and ‘down wiv da kids’. He’s a slacker. He also has a major crush on Travel Editor Darcy Silverman (Amanda Peet). In order to impress her he claims to be a writer in his spare time, so she asks him to submit a sample of his work. His multi source plagiarised effort then earns him a commission to write a piece on the Bermuda Triangle. You can see where this is going, can’t you? After his boat is sucked up by an inverted whirlpool, he’s washed up on a beach but strangely can’t move his arms or legs as they’ve been tied down by the Lilliputians. Wow, didn’t see that one coming!

So now we’re out of the update and into the good old Jonathan Swift tale of the land of Lilliput where Billy Connolly plays King Theodore, Catherine Tate acts as Queen Isabelle and the lovely Emily Blunt is Princess Mary. While incarcerated in the dungeon, Beast (the Lilliputians name for Gulliver) meets up with small town guy Horatio (Jason Segel) who’s been banged up for making eyes at the Princess - much to the outrage of her suitor, the blowhard General Edward (Chris O’Dowd). So, a lifelong friendship is forged in prison that will pay dividends to both parties. Eventually Gulliver wins the trust of the Lilliputians by putting out a fire at the Castle and saving the lives of the Royals by relieving himself on the flames. Now, talk about missed opportunities – Billy Connolly could have had a field day with this! Gags about being ‘peed off’ or never having felt so ‘wee’ spring to mind but no such thing was forthcoming thanks to the script, written for a retarded 6 year old audience by Joe Stillman and Nicholas Stoller. Interestingly, the ultra safe script didn’t stop the movie getting a PG certificate. A lot of the comedy seemed to focus on the inclusion of modern pop culture references, which was fun for a while but became predictable. Catherine Tate was also disappointingly gagged (not even a “Do I look bovvered?”) by the dull script as was ‘Gavin & Stacey’s James Corden who appears as Jinks, one of the Castle flunkeys and does a lot of running around. It was very frustrating to watch a group of performers who you know are all capable of something far better, being kept under the thumb by those with less talent. Speaking of which, Jack Black was also an Executive Producer of the movie and this probably explains why nobody was allowed to outshine him as he thinks he’s also the star. He meanders his way through the movie, hands in pockets, and never appears to get out of first gear. Maybe he too felt that there was no point trying too hard as the real star of the movie was the CGI Special Effects work – so perhaps, like the others, he felt it was best to have as good a time possible while making the movie and think of the mortgage payments.

Now the effects are good, although not exactly seamless. The compositing worked quite well so that a big Gulliver looked fairly real in the land of the little people but on several occasions my brain said ‘That’s an Effects shot’. I also noticed a couple of eyelines that were out of alignment, so the suspension of disbelief crashed and burned then too but generally much of the technicians hard work paid off. No doubt they’ll look better on the 3D version of the movie, coming to Blu-ray soon – and the kids won’t mind anyway.

Back in the story, Gulliver becomes the Lilliput people’s champion after seeing off an invasion by their enemies (the Profusians) from across the sea. It was interesting that the good burghers of Lilliput all had English accents (or close enough) and their enemies seemed to have French accents. Eventually, the writers decided to slip in a moral message by getting Big Jack and the cast to perform a kickin’ number entitled ‘War – What is it good for?’ in a large scale choreographed song and dance routine. Don’t worry, I’m not going to relate the whole story here. Does Gulliver make it back to the full size modern world? Does he manage to meet up with the lovely Darcy again? Do the people of Lilliput miss him? Who knows? Watch the movie to find out.

Obviously, ‘Gulliver’s Travels’ is aimed at the family audience but I really had to struggle to overcome my disappointment with something that could have been so much better. As a movie for young kids, it’s not really all that bad with the added benefit that it’s only 85 minutes long. Taken as a piece of entertainment, it just lacks the special kind of sparkle that Disney seem to specialise in – although I hasten to point out that this is not a product from the Big Mouse, just in case a Solicitor is reaching for the phone. Still, it’s bright, it’s colourful and played in a pantomime fashion – a bit like kids TV really. Perhaps with a script that made better use of the supporting cast and with a more universally likeable star, it could have been quite special. As it was, it was just a bit of fun – but only just. If you want to see a really good version of ‘Gulliver’s Travels’, track down a copy of the 1996 Hallmark Entertainment TV mini series starring Ted Danson.