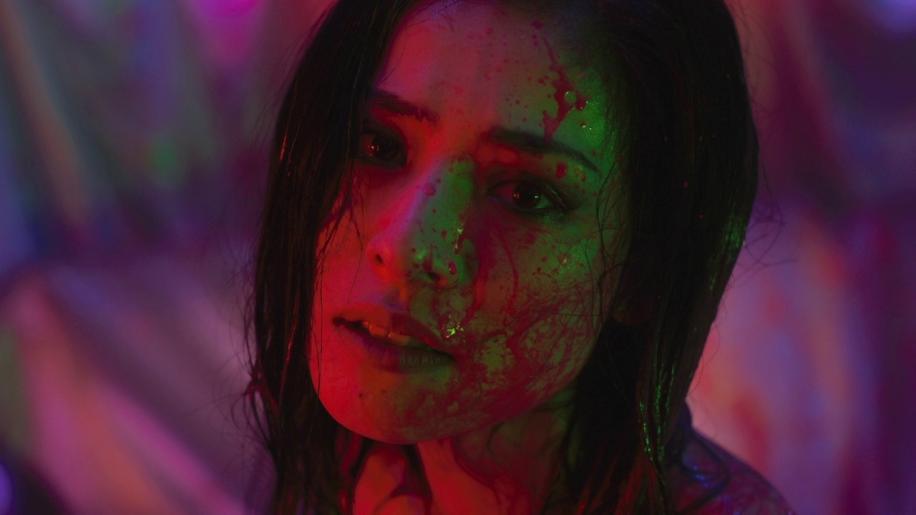 “People come to Love Hotels for sex. Many Love Hotels are in the Love Hotel district. In the 90s hookers worked the streets of Maruyama-cho Love Hotel district. A mystery took place there on the eve of the 21st Century.” Thus starts Sion Sono's Guilty of Romance, and the intro text is certainly guilty of hammering the term “love hotel” home. The third film in his “hate” saga, following up from Love Exposure and Cold Fish. Interest in the director has somewhat peaked since 2002's Suicide Club hit all the right notes to titillate the specialist festival circuit crowd and became a cult hit. Guilty of Romance is perhaps best described as a twisted Japanese Belle De Jour, updated and mixed with a mystery horror theme.

We are in Shibuya, more precisely a “love hotel” district of the city (and if you don’t know what a love hotel is, well your first guess will likely be right, a knocking shop by another name). A police car rolls up, cutting through the umbrella holding gawking bystanders eager to see what's going on. Detective Yoshida, a female cop, enters the scene, being ushered hurriedly towards whatever has the rest of her colleagues rattled. A woman has been butchered, her body cut into pieces and arranged with parts of a mannequin to form two separate figures, each dressed and seemingly posed to some symbolic degree. Paint and blood are daubed on the walls, and the word “castle” takes pride of place in this theatre arranged by the killer. It's a good set-up, the horror angle is low-budget in its use of maggots (strange to think they're still a staple of the genre given how frequently television audiences are exposed to them as a squeam-factor on shows like I'm a Celebrity...) and Sono makes sure not to show too much in these early moments. So far, so Jack the Ripper in Japan then? Well, in part.

Sono segmentalises the various strands of the film by way of not only drawing several narrative elements together from different directions (more on that later), but also by introducing a simple, almost pulp noir literature air by highlighting the chapters. Chapter 1 is dedicated to Izumi Kikuchi, the protagonist we stay with. She is shown to be a prim-and-proper middle class housewife, typical in a traditionally Japanese manner, dedicated to the minutiae of servitude to her husband and the rituals associated with pleasing him. She keeps a good home, her appearance is well groomed but unflashy, she arranges her husband's slippers by the door awaiting his return and sits by his side whilst he sips the tea she prepared, eager to know if she has passed muster in her duties. However, the smile on her face hides a dissatisfaction with her life, she is bored and frustrated. Her husband, a novelist, appears to know of sentiment and love by way of his writing, but this too is something of a façade as he fails to apply the same tenderness and understanding of women to his wife. The simple symbolism of a mannequin's mask is rudimentary for the viewer to grasp, and the more we see of Izumi, the more it seems an overly simplistic metaphor. When her husband leaves, she turns his slippers from facing the door to facing inwards, a sign that she must await his arrival.

It's worth noting that Sono is not merely a director but also a poet and novelist, and this may help explain his need to oversimplify. The genesis of the idea is sound, but the execution is too focussed in tight shots, as if the director would be more at home hiding the analogies in an abundance of words – a story to be interpreted rather than viewed, but his framing and want to always present the visual narrative elements as front-and-centre get in the way of this possible layering. What you need to know is always in front of your eyes, analysis on second viewing thus depreciates, even the literary references are thrown in heavy- handedly and as the plot descends into madness so too does the wordplay.

Soon the bored Izumi gets a menial job to fill her day, the symbolism and a hint of Sono's humour infuse this straight away, as she is trying to tempt customers to try her sausages in a super market, but is told she must speak up. She soon meets an agent for a modelling company who wants Izumi to try her hand at it. What proceeds is a tumbling into the rabbit hole of desire and unexplored emotions, as Izumi moves from modelling to simulated sex, an affair with her male co-star and prostitution, all whilst keeping up the appearance of a well-to-do attentive middle class wife. This is what's lead to the inevitable comparisons to Bunuel's Belle De Jour and it is a burden that Sono's work cannot maintain when things are sane in the first chapter. Not because the premise isn't solid (though, as with Bunuel's acclaimed work, there are some who still see it as a muddled view of female emancipation viewed through the eyes of male lust) but because Sono has so much else he wants to add to his version of sexual exploration.

The mystery of a killer lurking in the background and two more main female characters, each with their own peccadillos and ways of rationalising what they're doing muddy the waters of what, at times, could be a vaguely studied attempt at exposing the lack of cultural mobility for the female middle classes in Japan. A learned professor by day and prostitue by night, Mitsuko – Izumi’s guide in this world of depravity - applies her own intellectualised interpretation of her actions.

The early scenes set the tone, in artistic terms if not atmosphere (which shifts quickly in places) for all that comes after – if you favour Sono's heavy handed, sometimes strangely dark humorous approach to the nitty-gritty of the character's sexual relationships then you will find what unfolds likely still a mixed bag, but at least one that contains enough moments of interest told from a fairly unique perspective. At just under two hours it keeps a pretty tight pace, with emotions bubbling under and drama punctuating the juxtaposition of the women’s lives.

If, on the other hand, you favour metaphors that require interpretation, symbolism that is slowly drawn out and failed to appreciate the Bunuel's Belle De Jour then you'll no doubt find this, beyond the vague noir angle, hard to get into, at least until it descends into typically Japanese bouts of madness. Unfortunately that describes my view. The idea that it portrays women as sexually avaricious is not unique or taboo-breaking, and the veiled message that permeates, though was not obviously meant, is one akin to likening a woman unsatisfied in life in purely Freudian terms - “she looks a bit down, maybe her husband's not giving her what she needs...snigger”. Sono's piece works so much as it applies this prism to a Japanese view of femininity, but it still fails to move beyond a vaguely exploitative depiction of faux-empowerment, in the end relying on pure cliché driven insanity to propel the drama.

It's got a few hooks, the mystery noir angle will draw some, but the Pandora's Box of feminine desire is only explored in a shallow manner and pulls ever towards the cruel and twisted the more the movie runs. Sono's laboured symbolism doesn't help alleviate the inevitable predictability this creates, and no amount of wordplay masquerading as a genuine message, nudity or horror titillation can adequately answer this lack of substance.