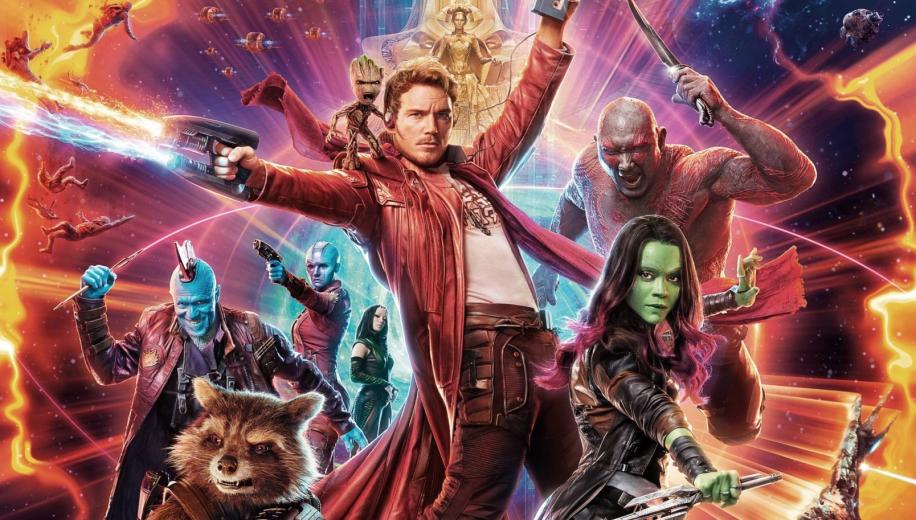 The Guardians of the Galaxy return in a shiny sequel that may not be quite as fresh as the first film, but is just as much fun.

Setting the tone right from the outset, with a spectacular opening credits sequence that is every bit as fun as the first, you know what to expect from this film. Yes, for these guys, it's just as important to have your speakers hooked up to your soundsystem in advance of a battle as it is to have your weapons ready. Maybe even more important. Everybody gets time to shine; Pratt finds his home in Starlord; Gamora and Nebula vent their fury; and even Rocket gets some scene-stealing moments, not least opposite Yando of all people. But it's Bautista's Drax, of course, who remains the highlight, here getting some excellent lines opposite the insect-like Mantis.
The story focuses on Kurt Russell's aptly-named Ego - a key player in Starlord's past - and the colourful chaos that ensues when the gang (on the run from another intergalactic army) bump into him. There's lots of heart in this one, and even without the freshness of the first one (where you really didn't know what you were walking in to), the script is sheer perfection, never wasting a moment to deliver a great line, and somehow servicing the story and characters at the same time. Things may end up in the same standard MCU CG-fest battle, but the ride is still a spectacular one, and this remains easily the most fun franchise in the Marvel Universe.

Guardians of the Galaxy Vol. 2 marks the flagship Ultra HD Blu-ray release for Marvel and Disney. Although shot at resolutions of up to 8K, it looks to have been finished with a 2K Digital Intermediate (DI), resulting in a 4K upscale on this disc, although the 2160p presentation, framed in the movie's original theatrical aspect ratio of 2.35:1 widescreen, is a suitably marvellous-looking rendition nonetheless, making for an impressive 4K debut for the studio.


This is a perfect flagship vehicle for the format

Although likely picked just because it was the most recent release available at the time Disney wanted to get into the 4K game, Guardians of the Galaxy Vol.2 is a perfect flagship vehicle for them to get into the format, exuding wondrous, vibrant colours and a rich and varied palette. It's a playground for impressive implementation of WCG and HDR. Alien skin tones - in particular the new gold-skinned intergalactic enemies - and Ego's world are absolutely stunning. Yondu's blue skin (which puts Gamorra's green skin to shame) practically radiates with intensity, whilst futuristic weapon blasts ignite the screen. It was already a rich and vivid world on 1080p Blu-ray, but the Ultra HD Blu-ray release is markedly different, something which should please fans who appreciate impressive WCG and HDR implementation and silence naysayers who won't look beyond the pixels. This is, after all, a mere 2K upscape, and yet the differences between it and the Blu-ray are undeniable. Aside from an uptick in clarity - with finer details on clothing weaves and skin textures - the colours are simple gorgeous. With solid, deep, bottomless black levels to round things off, it's a fantastic presentation.

On the aural side of things Guardians of the Galaxy Vol. 2 gets a considerable step up from its Blu-ray counterpart as well, sporting a Dolby Atmos track as opposed to the Blu-ray's DTS-HD Master Audio 7.1 track. The immersive HD audio Atmos track is founded upon a reference Dolby TrueHD 7.1 core which brings the piece to life with precision and veritable punch.

Dialogue gets clear and coherent presentation across the front array, whilst effects lap up the almost equally diverse futuristic and alien sounds on offer - from the tech to the weaponry to the creatures and even the damn planets; there's so much room to bring the soundscape alive, and the track doesn't hold back in lapping it all up and making the most of every discrete little element. The score is peppered with another plethora of Awesome(TM) tracks which keep the fun vibe flowing, but it also knows how to raise the stakes in the action or emotion department. As with a few of Marvel's releases (and perhaps even Disney's as a whole), there is a tendency to master at a slightly lower volume, but this generally doesn't affect the quality at all - you merely have to turn it up that little bit higher to reach the same level of reference perfection you'd get on another movie. Still, it's worth noting when you sit down to watch; this one might need turning up to 11.

Marvel misses a trick on the extras front, as they could have helped champion the notion of porting the extras over to the actual Ultra HD Blu-ray disc itself, but instead merely leave viewers to switch it for the Blu-ray when it comes to wanting to explore the supplemental material. Still, it's a solid set of extras.


Although they're all on the accompanying Blu-ray, there is a solid set of extras.

The extras are headlined by an Audio Commentary from director James Gunn, who offers plenty of background into the piece, the story, the production and the effects, as well as how they maintained the humour, humanity and momentum from the surprise hit first outing. There's also a brief 1 minute intro from the Director, and a 38-minute 4-part Documentary which is split into: In the Director's Chair with James Gunn; Reunion Tour: The Music of Vol. 2; Living Planets and Talking Trees: The Visual Effects of Vol. 2; and Showtime: The Cast of Vol. 2. We further get a selection of Deleted Scenes, a fun Gag Reel and a hilarious faux-70s Music Video featuring David Hasselhoff called Guardians Inferno.

On the plus side there is an impressive little Steelbook package, one of the few new 4K steelbooks on the market, which offers the same Steelbook package Marvel have conventionally afforded their 3D releases, only substituting the 3D disc for the 4K one. The only downside? No 3D, but for many 4K adopters, that was a sacrifice made at the hardware level anyway. And it is a very nice, embossed, detailed steelbook.

Disney and Marvel make their long and eagerly awaited debut on the new 4K Ultra HD Blu-ray format with an excellent Ultra HD Blu-ray release of Guardians of the Galaxy Vol. 2, which sports stunning video and audio, as well as a decent selection of extras. If this is the way of the future, then bring on the rest of the Marvel back-catalogue, not to mention all of Disney's other franchises.