Great characters, great laughs and just a great deal of fun - this is what sci-fi fantasy space opera should be 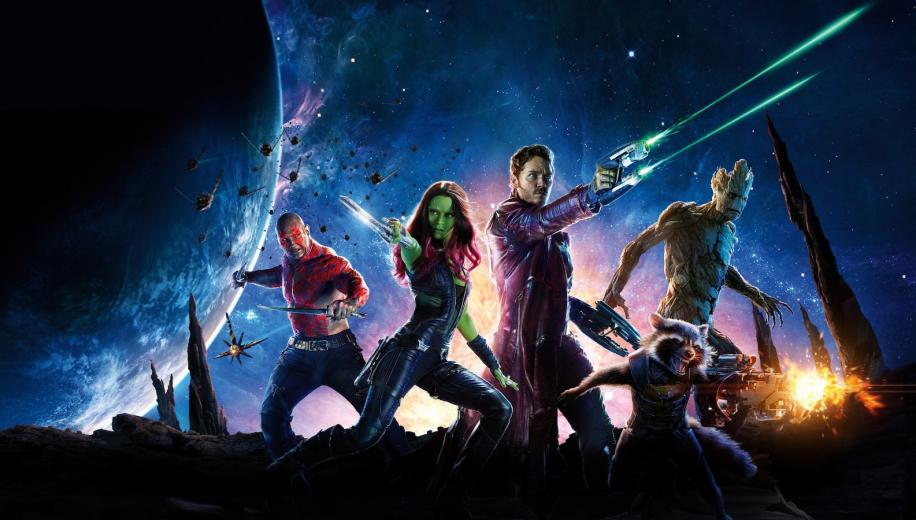 Guardians of the Galaxy Film Review

Avengers meets Star Wars for some Indy-flavoured full-throttle sci-fi-western-fantasy hi-jinks in the vein of Whedon’s Serenity.

Kick-starting with a wonderful nod to Raiders of the Lost Ark, Guardians established its credentials right from the get-go, resetting the balance after the game-changing Winter Soldier, and showing you just how expansive the galaxy-hopping MCU could be. There may well be some solid Marvel-standard action setpieces, and galaxy-far-far-away effects, but it’s the superb humour that drives the piece and leaves it still one of the most memorable Marvel entries.

Certainly, if Whedon didn’t have a hand in the script for this, then Gunn should consider a side-career of ghost-writing for the Buffy creator; his trademark humour is stamped all over this piece, which could have easily been reworked as either a Serenity sequel or even a (far better) Han Solo prequel – in some ways – both of which should be regarded as big complements.

One of the most memorable Marvel entries

Back in the early days of Phase II, introducing the world to all of the bigger players in the Marvel Universe (Iron Man, Cap, Thor) must have looked like a walk in the park in comparison to what they had to do here, with a quintet of arguably some of the least well-known sub-characters in the comic universe all needing to be brought up to scratch and integrated within a 2-hour runtime that also, somehow unfathomably, gets the ball rolling on the whole Endgame saga with its further introduction of Thanos.

Yet Guardians absolutely nails it all, not least thanks to the perfectly chosen cast; equal parts funny, goofy, heroic, dumb and loyal. Pratt, Bautista, Saldana, Cooper – they’re all superb – and, even though the film doesn't ultimately escape the now-obligatory giant-CG-space-battle-alien-invasion-war-end-of-the-level-thingy, Guardians still does a standout job for an origins movie, so good in fact that it almost single-handedly paved the way for Marvel to do every other left-field entry since, from Ant-Man to Doctor Strange to Black Panther to Captain Marvel, and upcoming projects like The Eternals too. If Winter Soldier showed just how gripping and adult a serious MCU movie could be, Guardians expanded things out in the other direction, proving just how big this universe really is.

Guardians of the Galaxy 4K Video

Guardians of the Galaxy follows the standard format of the MCU, namely that it's ultimately - technically - held back by a 2K DI. Nonetheless, this is a pretty nice rendition for the 2014 flick's 4K bow.

A pretty nice rendition for the 2014 flick's 4K bow

We take it for granted now, but Guardians was the first really expansive MCU entry, and it delivered its galaxy-hopping escapades with visual majesty, integrating some fabulous grand-scale action into the mix, and delivering largely seamless effects at every stage. Detail remains impressively rendered, from the weathered look of the ships and costumes to the battle-ravaged landscapes, to the fleet of star fighters and gigantic enemy destroyers. It may well be a 2K DI, but this 4K upscale wrings every last nuance out of the image, and delivers plenty of texture and finer object work beneath the surface.

Of course it's the colour handling that reigns supreme, thanks to WCG and, even without Dolby Vision, HDR is impressive. Colour depth is strong, sometimes subtly enhancing the SDR 1080p Blu-ray look, sometimes more strikingly popping with neon influence and primary opulence. Black levels are considerably deeper, making for a darker experience than the Blu-ray, but also one with a broader range from peak brightness to inky blackness, affording better nuance again, and superior shadow detail. It was never going to be a head-and-shoulders-better-than-the-Blu-ray 4K spectacle, in part because the standard of that was already pretty damn good, but it does a very good job nonetheless, and makes for a pleasant upgrade.
﻿

Guardians of the Galaxy 4K Audio

The Dolby Atmos track is a similarly marginal 3D object-based high definition immersive audio upgrade on what was an already largely reference DTS-HD Master Audio 7.1 mix. Indeed, some might argue that they would prefer the more wholesome weight and depth of the Blu-ray's excellent mix over the slightly more compromised - although clearly far more expansive - Atmos remix, and it would be hard to dispel such an opinion.

A compromised although expansive remix

Dialogue is rendered with clarity throughout, delivered with priority largely across the frontal array, whilst the engaging score affords a backbone that permeates the array and keeps everything really quite engulfing in form. It's the effects, of course, that define the piece, bringing more fantastical, futuristic tech to life both in terms of weaponry - from hand blasters to potential planet-blasters - ships, again wondrously realised in all their imaginative innovation, and just general cool features, allowing for smaller subtleties, as well as more throaty explosions to decimate the soundstage, whilst dynamics impress with a certain degree of separation across the discrete channels. There's plenty of LFE to go around, and the track is not lacking in the bass department, although, as per, you'll need to turn it up a notch to get it to the right level. Still, there's some throaty but nuanced range to the DTS-HD 7.1 mix that somehow hasn't quite translated here into an equally deep Atmos alternative, leaving it - as with the video - a very good mix that nonetheless doesn't earn either a demo or reference nod.
﻿

Guardians of the Galaxy 4K Extras

There's nothing on the 4K disc itself, with the accompanying Blu-ray containing all the old extras from the previous release.

Nothing on the 4K disc itself

A James Gunn director's Commentary, a trio of Featuretttes, some Deleted Scenes and a much-welcome Gag Reel leave this set covering all the bases.

Guardians of the Galaxy 4K Verdict

Although recapturing the magic second time out may have proven more hit and miss - and certainly less memorable - there's no denying that the Guardians have remained an integral, and hilarious, addition to the Marvel pantheon, and few won't be eagerly anticipating seeing what the outstanding Thor/Guardians combo can come up with next.

If Winter Soldier showed just how gripping and adult a serious MCU movie could be, Guardians expanded things out in the other direction, proving just how big this universe really is

Disney's last set of MCU movies to make their 4K bow - the first Ant-Man, and the first Guardians of the Galaxy movie - finally land with expectedly very good, albeit, also expectedly, not outstandingly so, video and audio. Guardians of the Galaxy is still an upgrade over its Blu-ray counterpart, and fans will want to close out their 4K collection with this last missing releases.
﻿