Lucha what we have here... Drinkbox is back to unleash its masked hero upon the gaming world Juan more time 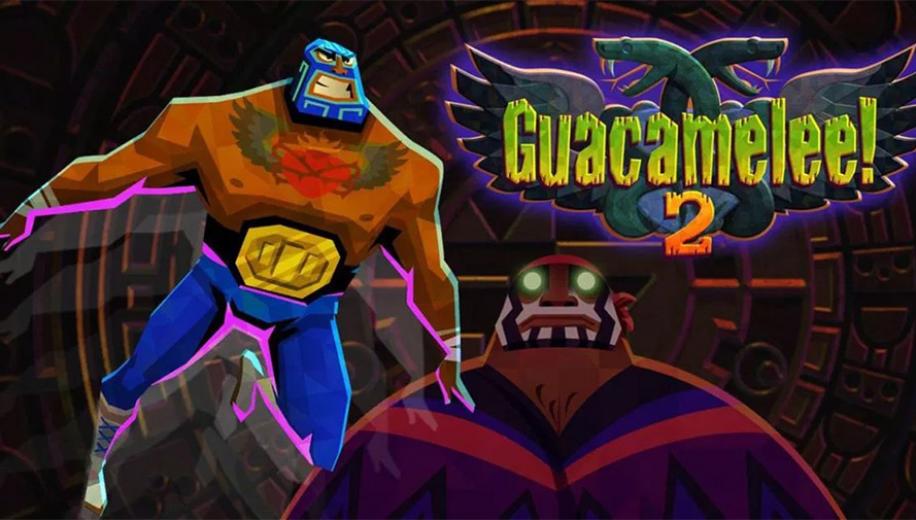 Guacamelee! 2's pace is utterly relentless. It isn't just the frequent frenetic combat sequences or the finger gymnastics required to get through its more arduous platforming section, either – it's everything. The rate at which it offer new and enhanced moves to mess around with; the speed at which you can get around once you get a feel for the systems; the breakneck pace at which the game manages to motor through countless blink-and-you'll-miss-it references to classic gaming moments, other media and, of course, memes. It's a game that fires on all cylinders 100% of the time, with the exuberant art style and killer mariachi soundtrack both perfectly positioned to ensure there's never a dull moment. And more than this, it's a textbook example of what a sequel can and should do – it builds on the strengths of its predecessor, gives the weaker aspects the second pass they deserve, and layers on a ton of new stuff to make it feel fresh. It says a lot that even in a year like this, when competition in the exploration-based platformer genre has never been fiercer, Guacamelee! 2 still has a fair shot at walking away with the title belt. But we're getting a little ahead of ourselves here, so let's slow things down and dive into just what makes Drinkbox's latest creation just so special.

When it comes to Metroidvania games (a portmanteau of Metroid and Castlevania, used as a blanket term to describe platform action games with a similar focus on exploration), good pacing is crucial. There's no right or wrong way to do it, just so long as it feels right in context. Hollow Knight is quite stingy with its upgrades and movement tools, but that makes sense in its beautifully bleak world, whereas something like Castlevania: Symphony Of The Night has so much more to offer with its RPG-esque loot drops that you can find yourself reworking your loadout every couple of minutes. It's all about what feels right for the game in question, and in the case of Guacamelee!, it means upgrades need to be able to keep up with the pace of the rest of the game – no mean feat, but Drinkbox pulls it off. It isn't long before ex-lucha champ Juan is out of his civvies and bouncing off walls in his best wrestling garb, and you never have to go more than a short while before getting something new to play with. Having most of the unlockable attack moves double as mobility tools is a superb way to eke more goodness and longevity out of each upgrade, plus it also introduces a degree of lateral thinking where you need to consider everything in your arsenal when approaching a puzzle or challenge. Trust a wrestler to come up with a way of punching his way out of any situation. In keeping with the game's wrestling theme, combat is frequent and while there are typically a few goons wandering the overworld to get in your way, most major battles take place in frequent 'arena' style rooms that pepper the expansive map. Sure, you could oversimplify these as just the usual action game trope of a locked room that inexplicably only opens up once everything except you is dead, but that'd be selling the game short. Almost without fail, these are expertly designed to test everything you've learned so far, whether it be having shielded enemies that need to be softened up with a recently earned power move or gating tougher packs behind hidden areas that can't be reached until later in the game. Many also include stage gimmicks to mix things up – hazards that weakened enemies can be grappled and tossed into for easy kills, moving parts that keep the encounters dynamic, and even puzzle-like variants where you need to use certain mechanics to your advantage. Even in the more basic battles, there's still a beautiful sense of rhythm to the cartoon violence and prioritising troublesome enemy types (the shamans that hide away while buffing other foes are the devil's own work) is endlessly satisfying. Even more so on the unlockable Hard difficulty where enemies hit like trucks, although the skills and strategies you pick up on the first run mean that the next tier up isn't actually all that much more challenging outside of a few notable difficulty spikes.

Movement and navigation has a similarly rewarding sense of flow to it, although there's an awful lot to get your head and hands around when it starts getting serious. Most of the more difficult sequences demand full use of two switching mechanics – one letting you toggle between human and chicken form (because what self-respecting luchadore can't turn into a chicken on demand?), while the other allows you to swap between two different planes of reality. The latter is used wonderfully to show off the differences between the world of the living and the land of the dead, with visuals, characters, and even the music shifting to reflect which you're in at any given time. But it's the ingenious use of this system during more involved platforming passages that really impresses, with certain key features blinking in and out of existence as you swap dimensions. You need to successfully chain jumps, dashes, planar shifts, form changes and more in one fluid motion to get through the toughest challenges, and the input notation for some of these would look ridiculous if you were to jot it down... fortunately, the game does an amazing job of teaching you its visual language piecemeal along the way, so these sections come to be the final exams to prove you can put together everything you've learned. Some have bemoaned the overt simplicity of the colour-coded breakable blocks that correspond to areas gated behind certain abilities, but even this is actually another form of passive tuition – the world itself teaches you what colour symbolises which ability, a fairly abstract connection but one that needs to be fresh in your mind during any intense battle or platforming sequence.


There's a beautiful sense of rhythm to the cartoon violence Anyone who enjoys playing Spot The Reference in games such as Enter The Gungeon or other properties like Ready Player One will need their scorecards at the ready the moment they hit the start button. Before it even really begins, Guacamelee! 2 has already sent up Castlevania, Zelda, Limbo, a bunch of arcade scrolling fighters, and tons more, and the staff at Drinkbox must have incredibly stiff necks from all the nods they make over the course of the game. It's all handled in a manner in keeping with the game's playful tone so winds up making Guacamelee! 2 feel like a love letter to an entire medium, although some people might find the brash and shouty school of 'HEY LOOK THIS IS A DARK SOULS JOKE' kind of references to be a little too crude or daft. We'd just like to take this opportunity to remind those people that this is a game about a superhuman wrestler who can turn into a chicken – Drinkbox's approach here makes a lot more sense in the context of what is, knowingly and intentionally, a very silly game indeed.

In any case, it never lingers long enough on any of these references to make them feel like a problem – you always either find yourself forgetting one that falls flat the moment combat starts just seconds later, or having to deal with some perilous platforming with the extra disadvantage of still being giggling over whatever the last dumb joke was. Guacamelee! 2 is a game that's always on its toes, flitting from precision platform action to intense combat to weird and wonderful wisecracks with such finesse and freedom that it all blurs together into a truly unique and engrossing experience. With similar games like Hollow Knight or Ori & The Blind Forest, it's the world-building and atmosphere that keeps your hands and eyes glued to pad and screen respectively (never get those the wrong way around...). Here, it's more the constant surprises around every corner that make the game hard to put down as you get dragged further and further into the whirlwind of chaotic awesomeness that is Guacamelee! 2.


A game that's always on its toes The Metroidvania scene has gone from strength to strength in the last few years, and it's amazing to see that developers are still managing to find ways to push the envelope.

It's the power of having a strong identity that allows all the modern greats to stand more or less shoulder-to-shoulder – Axiom Verge has a superb sense of sci-fi weirdness to it, Ori is an emotional rollercoaster, Hollow Knight is as atmospheric a game as you're ever likely to play, while recent addition to the family Dead Cells provides more of a roguelike RPG twist on the template.

They're all amazing games on their own merits and mechanics, and Guacamelee! 2 nestles neatly among them in terms of quality, with its vivid palette, quirky sense of humour and whimsical cartoon Mexicana carving Juan's head into the Mount Rushmore of exploration-based platformers.

An outstanding game in its own right and an even better sequel, Guacamelee! 2 is all the proof we need that Drinkbox is one of the most talented, playful and creative teams working the indie circuit today.