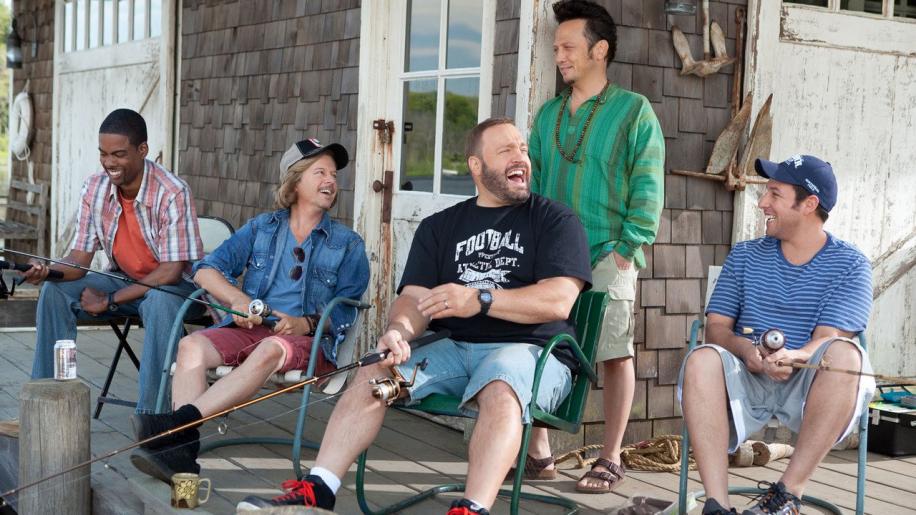 I’ve never really rated Adam Sandler as an actor or as a comedian, he’d done nothing bad, or anything that offended me, but his output was something that I was rather nonplus about. That is until I saw Reign Over Me. Like many comedians over time who find their roles becoming more serious or tragic, the story of a man coming to terms with the death of his family in the atrocities of the September 11th bombings was a role filled with so much pathos and was carried so beautifully by Sandler that it changed my outlook of him. I never actively sought out his films, but I was far more willing to switch over if there was something of his on TV. Of course, these type of serious, tragic characters are not his forte, but rather characters that are on the fringe of comedy, a kind of mad self mocking, soft talk lunacy, that for me took a while to see and to get into. So when his latest film, Grown Ups, came along I thought I’d have a look and see if there was something there to latch onto.

Written by Sandler himself, Grown Ups tells the story of five junior basket ball champs that over the years lose touch with each other but find themselves together once more when their coach dies, and decide to spend a weekend together to reunite themselves with each other, whilst paying tribute to their departed leader. That, in a line, sums up the plot of the film, but within it, each of the five, along with their own wives and children, gradually rekindle their friendships and regain that lost ‘youthfulness’ that growing up seems to dampen. As a comedy it’s pretty dry, as a sentimental fable it’s enjoyable and as a film it’s very easy watching.

With so many cast members, and five ‘principles’, it can be hard for a director to give even screen time, so that each character is given room to breathe and explore their traits and arcs. In Grown Ups the five ‘principle’ cast members are all firm friends, have worked together in the past, and show a tangible chemistry with each other that never moves into ego territory, or scene stealing, but gentle ribbing and a one-up-man-ship that raise genuine laughs from all involved - the comedy is in the situations and just evolves around the characters' improvisation upon the script. Each cast member is given a back-story in the first few minutes of the film, neatly telling the audience what to expect, and during the course of the film each one gets the chance to break from that path to something that is quite heart-warming. It may not be revolutionary, or soul searching, but it is nevertheless a dramatic hook to hold the film together – that of enjoying life with friends over a solitary existence, so turn off the computers, go outside and live.

Sandler plays the most successful of the main cast, his character Lenny Feder, is a very successful Hollywood agent, who is becoming disillusioned with his children’s reliance on video games and the nanny. His wife, Roxanne (Salma Hayek), herself a successful fashion designer lives for her work and, if anything, is more independent than Lenny – their relationship whilst built on love is now just tolerance, tinged with insecurity. So when the poor coach dies, Lenny takes it upon himself to hire the same lake-house that the five boys celebrated their championship win at, all those years before, as a get together for everyone, including their families, to celebrate the coaches life and rediscover their respective friendships, but he neglects to tell Roxanne, even though she has a fashion exhibit in Milan the same weekend. As a boy, Lenny was the leader of the group, the best player and star of the team and whilst he ‘never knew how to pass’ he also never missed a shot. Once at the lake-house and teaching his own son how to play the game, you can see his leadership qualities come through – it's not a case of showing off with the most money, in fact quite the opposite, he hides his nanny as an exchange student, he bans his kids computer games and phones, he is all about instilling in his children, and by proxy all the other kids there, a sense of play, outdoor fun, dirt, skipping stones, paper-cup phones etc. His enthusiasm is quite infectious, even to the point whereby his wife, who wants nothing to do with this getaway in the first instance, insists that they remain for the full weekend. Sandler instils his character with the same kind of pathos that seems to inhibit all his characters, he is a lovable rogue with a gleam in his eye, a quick wit and effortless charm – his decision to throw the final showdown is clearly the right one, not only for his ‘rivals’ but for his team, who now have another excuse to come back next year. His performance is nowhere near as dramatic as that of Charlie Fineman in Reign, and never has to plumb those emotional depths, but that devil-may-care attitude certainly bubbles under the surface, and of the five ‘journeys’ Lenny’s is, perhaps, the most believable.

Kevin James, probably best known for the TV show The King of Queens, plays Eric Lamonsoff, an overweight but lovable character, which is pretty much everything he ever plays. Here Eric is a somewhat downtrodden guy that plays it big in front of his pals, not wanting to let them know that he, and his family, are not doing as well as he would like them to believe. He learns through his time that his friends like him no matter what, and he never needs to pretend - an admiral sentiment.

Chris Rock plays the most against type with his character, Kurt McKenzie, a house husband, hen pecked by both his wife and mother-in-law, and he never seems to be appreciated – very different from the wisecracking, fast and loose talker we have come to expect. It is an unusual part, but genius, for when Rock does use his wit it is with devastating effect; the snide and critical comments make for some great one-liners. His journey relates more to the family unit and the appreciation that comes with being respected.

David Spade, plays very much to type with Marcus Higgins, the only member of the unit not to have married nor have a family, he tries to still live the bachelor lifestyle, but at his age is unable to fully commit. In what is, perhaps, the shallowest of the characters he comes to realise that being alone isn't the best that life offers, and he learns the morality of respect when it comes to the daughters of this world – his comic timing is also perfect.

Rob Schneider heads up the last of the main cast with the enigmatic Rob Hilliard, a hippy type character whose love of the older woman is quite extreme. With two failed marriages and estranged children, he comes to accept his own flaws bringing his immediate family closer.

These very different characters are all put together, and being genuine friends in real life bring that chemistry to bear on screen – it really works. In fact the best parts of the film are the simplest; these five guys ripping on each other, and being comedians they are never short of something to say and Dennis Dugan, the director, just lets them go using the best parts for the film.

Apart from Spade, all the other characters are married with children, and each of these supporting cast are given their own screen time and tell their own story – the wives played by Salma Hayek, Maria Bello, Maya Rudolph and Joyce Van Patten respectively are all talented comedians or actresses able to pull of the comedic role with aplomb. They too have scenes where they are able to adlib around the script and share a genuine chemistry.

Perhaps the best all encompassing scene is that set in the water-park, where everyone, including the child actors, look like they are having fun with the script, it seems to be a genuine moment of movie magic where everything gels to form that something wonderful. The big finale is set up very nicely with a rivalry between the opposing kid’s basket ball team and that payoff is so skilfully handled that, like the characters, you too want to come back for more.

Grown Ups, then, has a lot going for it, it is very funny in places, it tells a terrific bonding story and leaves you wanting more. It is nowhere near the best Sandler film, in fact it is nowhere near any best film, but what it is, is an easy watching and fun couple of hour’s escapism. Ain’t that what a film is supposed to be?