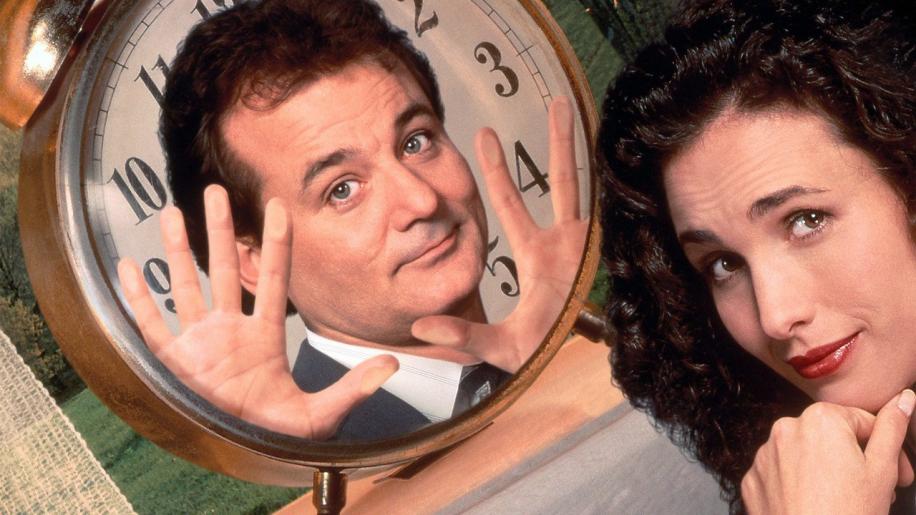 In 1993 Harold Ramis, fresh off Ghostbusters II, teamed back up with Bill Murray (Ghostbusters, Lost in Translation) and took us all on a trip back into the Twilight Zone. Contributor to the screenplay of the story about a man destined to re-live one day of his life, forever. That day would be the second of February, otherwise known in the North American continent as Groundhog Day. A day where tradition dictates a groundhog, or technically marmot emerges from hibernation and if on that day it sees its shadow then there's six weeks of winter still to come.

Phil Connors (Bill Murray) is the fated TV weatherman who every year descends upon Punxsutawney, Pennsylvania, to report on this age old tradition; the town's people gathering at Gobbler's Knob, the town elders reaching in for the groundhog, the groundhog in turn giving his prediction for a short or extended winter. Phil hates his job, he detests travelling every year to this backwater village to report on this ceremony and to add insult to injury the groundhog which takes centre stage shares his name. It's fair to say that Phil's bitter.

Phil dutifully completes his report, goes back to his hotel, packs and leaves. A severe blizzard stops all that though and Phil, Rita his producer (Andie MacDowell) and cameraman Larry have no choice other than return to Punxsutawney. The next day arrives, well for everyone else it does; for Phil, well he wakes to the dulcet tones of Sonny and Cher once again. For Phil is now repeating the same day, he has to go through Groundhog Day all over again, again and again. He quickly realises that he is destined to relive this day for the rest of his life, however long that might take.

Ramis had done some decent writing way before he got this far, his earlier works including Ghostbusters I & II and the well respected Caddyshack and here he teamed up with first time writer Danny Rubin to produce something you would more readily expect to be a sub plot in a decent Twilight Zone episode. I recently asked a young family member if he would like to watch Groundhog Day telling him a little of the plot; the reply was..”What's the point?” On first glance you would have to have the same reaction, what would be the point in watching a film where everyone just repeats what they are doing, day in day out. Groundhog Day though survives this inevitable curse for three main reasons, the writing, the acting, and the underlying themes.

Ramis obviously enjoyed the original story submitted by Danny Rubin and he realised that with a few minor tweaks here and there he could pull off an enjoyable romantic comedy, one which would provide a belly full of laughs and at the same time give the viewer the opportunity to think about it on a deeper level if they so choose. To these ends he teamed up with his old stable mate, Bill Murray, thinking that Murray's laconic, sarcastic delivery would be ideal for the weatherman who feels life has passed him by and who blames everyone else around him for this, preferring to antagonise people with sarcastic replies rather than listen to what other people think or have to say.

The jokes come thick and fast, mainly from the comedic acting talents of Murray who was undoubtedly on top form when he strode onto this set, and he's really just bouncing off the individual scenes that have almost been pre-written for him by Ramis. There are far too many instances where I actually laugh out loud at this film no matter how often I see it, Phil discussing blood sausage, meeting Ned Ryerson (a superb Stephen Tobolowsky) for the first time since high school. It's a joy to see Murray's face as Ned takes his hat off, punching Ned later in the film, driving with the groundhog, his attempts to seduce as many women as he can, pulling up to the cinema as Bronco... really the list goes on and on and one I wouldn't want to spoil by telling some of my all time favourites. OK, so the Bronco scene is my favourite!

The acting is superb for what this is, I mean we're not talking about a Gandhi, Godfather or Citizen Kane here but all of the cast gel incredibly well and look as though they had a riot just being part of this film, from the main players all the way down to the gay waiter in the diner. I have never really enjoyed Andie MacDowell in any film, always finding her a little too aloof for her own good. That belief has not really changed and when I first saw Groundhog Day my heart sank a little when I realised she was playing the leading lady although I was yet again glad to be proved wrong as she is the perfect foil for Murray's at times brutal edge. The rest of the cast perform their parts more than admirably with credit going to the aforementioned Stephen Tobolowsky as the waste of a life insurance salesman, appropriately referred to as a giant leach.

All this aside though there is a deeper significance to Groundhog Day should you go searching for it, and in all honesty you really don't have to search that far as it's pretty blatant. It raises some interesting questions, the main one being “What would you actually do if you had to relive one day for an indeterminate amount of time”? Would you look upon this as an opportunity for self advancement or would you see it as the living Hell that it might come to represent? As it is pointed out to Phil in the film it can be viewed both ways, glass half full or glass half empty, and it is this journey which Phil embarks upon which captivates the audience to see how he decides to live the rest of his life with no consequences.

At one point Phil turns to Rita and states that he is in fact a God. There are reasons for his statement and he puts forward a convincing enough argument, however the religious or rather spiritual overtones do not quite end there. Many different communities have looked upon this film and commended it for the message of good will to all men that it finally brings across and it does in fact seem that Phil, once he realises that being nasty all the time does not bring him the rewards that he ultimately seeks, changes his behaviour and only then perhaps sees some light at the end of this particular tunnel.

It's kitchy in parts that much is true, and the middle act when Phil tries to seduce Rita does become a little irritating after a while. In saying that though it has to not only show us the true nature of Phil's character at this point in time but also the reaction he gets from a bamboozled Rita, and essentially sets us up nicely for the third and final act of this film. Yes it has its faults but lets face it, it's still a damn funny film even after all these years, even after all these repeated viewings.

This is apparently the 15th year anniversary edition yet was released in 2009 some 16 years after its initial theatrical release. Perhaps it skipped a year in its own Groundhog Day somewhere along the way. An excellent, amusing film with some depth and one to have in your collection to bring out every year, February 2nd.